Art For An Integral Ecology

A. Vonn Hartung is a Puerto Rico-based artist who works across a variety of media, including painting, woodcarving, mosaic, and ceramics. His defining achievement came in 2001 when he was commissioned to paint the official portrait of Blessed Carlos Manuel Rodríguez Santiago, the first Puerto Rican to be so recognized by the Holy See. Vonn’s portrait hangs in the Hall of Saints of the Pontifical North American College at the Vatican. Inspired by Pope Francis, Vonn and his wife Patty are now offering to the Church a powerful painting that starkly illustrates the choice we face between the technocratic paradigm and an integral ecology. What follows is the image itself, along with the artist’s own commentary – Mark Gordon

By A. Vonn Hartung

In response to our Holy Father Pope Francis’s call to dialogue and action on climate change in his encyclical letter, Laudato Si: On Care for Our Common Home, I offer this metaphorical painting, “On Earth as it is in Heaven,” as a visual prayer to raise consciousness and to encourage dialogue. 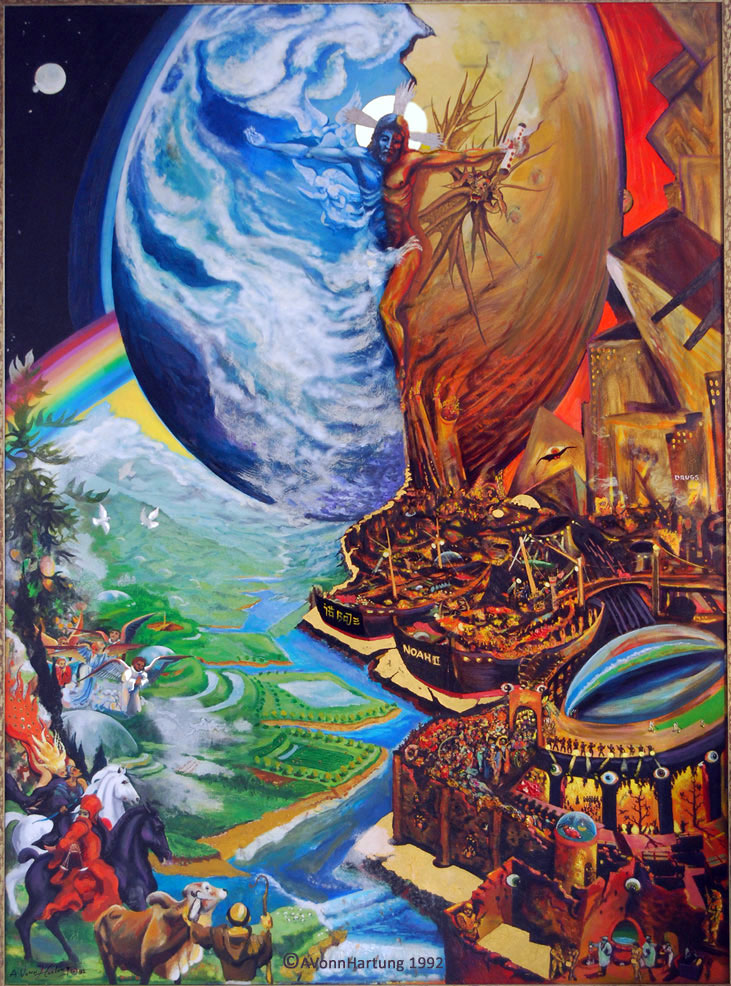 The title of the painting is taken, of course, from the prayer Christ Jesus taught us: “Thy kingdom come, thy will be done, on earth as it is in heaven.” The painting is rhetorical in concept and presents us with only two possibilities, one in harmony with God’s Creation, a future of justice, peace and sustainability in the natural world, the other of plunder, chaos, endless war, and an ultimate collapse of nature and life on our planet-home. The painting asks the question of the viewer, each one of us, whatever our religion or beliefs: Which future do we want to live in? Which do we wish to leave to our children and future generations?

From a Christian understanding, God gave us free will when in the Garden of Eden He granted Adam conscious intelligence and offered the choice to eat or not eat of the fruit He had forbidden him (Genesis 2: 16-17). Adam chose not to listen to God and disobeyed Him. God gave us a second chance sending His son Jesus Christ to redeem us from our sins. Again, we did not listen; we, both the powerful elite and the uninformed rejected him and crucified him.

Now God again is giving us another choice. He is clearly speaking to us through His Vicar on earth, Pope Francis, and through His creation in the appalling species extinction since the onset of the Industrial Revolution, the horrendous events of climate change, the suffering of the poor and our endless wars.

Will we once again refuse to listen to God, not do His will but rather do ours? Will we ignore Him and continue in our own foolish inevitably destructive path towards annihilation?

In Laudato Si, Pope Francis speaks to us of Saint Francis of Assisi whose name he took as his own upon becoming Pope, naming the saint as “the Patron Saint of all who study and work in the area of ecology” (LS 10). So we see Saint Francis in the foreground of the painting with the faithful ox, symbol of the Gospel of St. Luke and the Book of Acts, opening for us the full spectacle of consciousness of the fateful choice before us, a choice we must make.

Our choice begs the question, if we wantonly destroy God’s sacred Creation through self deception, apathy, pride and/or greed, do we not blaspheme against God, and would this not be as the sin of Lucifer, God’s favorite angel who fell because of his envy and pride, daring to challenge God and rebel against Him? 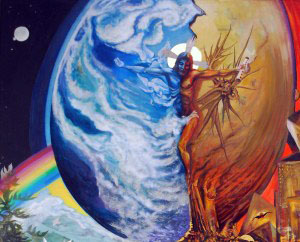 At the center of the painting we see planet Earth, “our common home” in a healthy, vibrant, livable state on one side, and in a barren, scorched state of death on the other.

Superimposed above Earth is Christ, the center of creation, the One through whom “all things were made” (John 1:3). In His outstretched right hand He holds seven stars, symbolizing hope; and above and to His right, outer space, our habitation of the moon, signifying a future of endless possibility.

In the other hand however, Christ clutches the sealed scroll of the Apocalypse behind which the dreaded plagues wait to be released once the seals are broken. Earth is painted in the form of an egg, metaphorically symbolizing the fragility of Earth’s ecosystem as well as her natural abundance and fertility.

The metaphor of the egg is also used to show a covenant broken and the resultant rupture of earth’s fragile ecology and humanity’s fall from grace caused by a flawed and linear economic system based on the misuse of power and wealth, symbolized by the unholy use of gold. 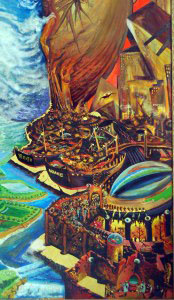 In Christian symbolism, gold has traditionally been used to symbolize the uncreated light of God (divinity) as in the halos of saints and Christ. Here, however, gold is used in the lower portion of the painting as if dripping from the broken egg, trickling down, or striking like lightning to symbolize envy and greed in desiring and achieving a seemingly ultimate dominance and control of the world’s natural resources and wealth which defines the fracture and the wall of separation of the two possible futures.

Behind this wall of separation, which seems to cry out in pain and protest, lays a collapsing world, painted in a palette of sienna and umber, of burning and burned out buildings collapsing in upon themselves.

Everywhere there is evidence of violence (Isaiah 24:5)! People have defiled the earth. They have disobeyed God’s laws. They have violated the statutes and broken the everlasting covenant. Among the structures in this wasteland are pyramids (reminding us of the cult of the dead) and the prominent dome of a biosphere meant to symbolize an attempt to create habitable inner space and to counterpoint the viable outer space exploration as seen in the outpost on the moon.

This biosphere suggests that the only living space to be realized in such a depleted future might well be the heavily guarded privatized dwellings of the super wealthy.

Surrounding this “bubble” is evidence of the price of keeping such an enterprise exclusive and secure, a commerce of slavery enforced by brutal domination and fueled by the trade in pilfered body parts and tissue of the vanquished through unimaginable horrors of dehumanization.

The seven deadly sins are implied, although partially veiled through the use of semi-abstraction indicating the complete loss of moral values and the ephemeral and ever-changing nature of modernity.

The folly of not doing God’s will and heeding the call to change and live sustainably is expressed in the feeble attempt of the proud and powerful to save what’s left of Creation through the building of an ark, the absurdity of which is evidenced in the need to build a second one. 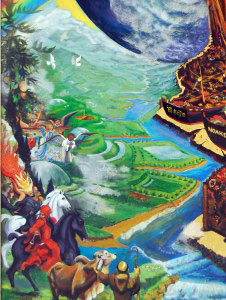 Contrasting this hellish vision is the flourishing side of the painting, showing a future symbolized by the ever-flowing life-giving waters of the rivers that nourish creation, the waters of Baptism and the water that flowed from Jesus’ wound.

Beside these waters we see the cultivation of sustainable agriculture and aquaculture, as well as buildings that are constructed into the earth in order to save on energy and for protection from natural disasters.

The landscape is serene and seemingly lightly populated, suggesting self-sufficient intelligently designed communities where constant commuting and super-highways are unnecessary. This is a world in harmony with itself! 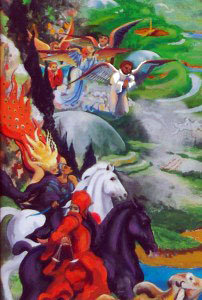 In the midst of this Vision of Hope we see a company of angels accompanying The Horsemen of the Apocalypse who. They are held in check by an angel who, we might imagine, whispers to them, “Wait! Humankind still has the time and free will to change its ways and to do the will of God!”

This can only happen if we give up our predatory fantasies of unlimited, linear economic growth, of being all-powerful, and of being separate from Nature. We must heed the vision of St. Francis. We must listen to the prayer that Pope Francis offers us in Laudato Si, words of love and wisdom that respond to “both the cry of the earth and the cry of the poor” (LS 49). And we must listen to the Lord’s own prayer – “Thy Kingdom come, thy will be done, on Earth as it is in Heaven” – which beckons us to change our ways, to do justice, to live in right relation with each other and nature, in harmony with our “Our Common Home.” Amen. 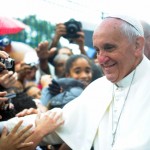 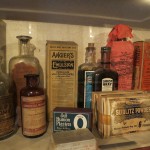