A Message in Blood: ISIS and the Meaning of the Cross

Last week, the attention of the world was riveted to a deserted beach in northern Libya, where a group of twenty one Coptic Christians were brutally beheaded by masked operatives of the ISIS movement. In the wake of the executions, ISIS released a gruesome video entitled “A Message in Blood to the Nation of the Cross.” I suppose that for the ISIS murderers the reference to “the Nation of the Cross” had little sense beyond a generic designation for Christianity.

Sadly for most Christians, too, the cross has become little more than an anodyne, a harmless symbol, a pious decoration. I would like to take the awful event on that Libyan beach, as well as the ISIS message concerning it, as an occasion to reflect on the still startling distinctiveness of the cross.

In the time of Jesus, the cross was a brutal and very effective sign of Roman power. Imperial authorities effectively said, “If you cross us (pun intended), we will affix you to a dreadful instrument of torture and leave you to writhe in agonizing, literally excruciating (ex cruce, from the cross) pain until you die. Then we will make sure that your body hangs on that gibbet until it is eaten away by scavenging animals.” The cross was, basically, state-sponsored terrorism, and it did indeed terrify people. The great Roman statesman and philosopher Cicero once described a crucifixion but only through a convoluted circumlocution, for he couldn’t bring himself to characterize it directly.

After putting down the great slave uprising of Spartacus, the Roman government lined the Appian Way with hundreds of crosses so as to dissuade any other would-be revolutionaries. Pontius Pilate had much the same intention when he nailed dozens of Jewish rebels to the walls of Jerusalem. That same Pilate arranged for Jesus to be crucified on Calvary Hill, a promontory situated close to one of the gates of ancient Jerusalem, guaranteeing that his horrific death would not be missed by the large Passover crowds moving in and out of the city.

From the crucified Jesus, all of the disciples, save John, fled, precisely because they wanted with all their hearts to avoid his dreadful fate. After Good Friday, the friends of Jesus huddled in terror in the Upper Room, petrified that they might be nailed up on Calvary as well. The disciples on the road to Emmaus were, understandably, heading out of Jerusalem, away from danger, and they were utterly convinced that Jesus’ movement had come to naught. In a word, the cross meant the victory of the world, and the annihilation of Jesus and what he stood for.

And this is why it is surpassing strange that one of the earliest Apostles and missionaries of the Christian religion could write, “I preach one thing, Christ and him crucified!” How could Paul — the passage is taken from his first letter to the Corinthians — possibly present the dreadful cross as the centerpiece of his proclamation? He could do so only because he knew that God had raised the crucified Jesus from the dead, proving thereby that God’s love and forgiveness are greater than anything in the world. This is why his exaltation of the cross is a sort of taunt to Rome and all of its brutal descendants down through the ages: “You think that scares us? God has conquered that!” And this is why, to this day, Christians boldly hold up an image of the humiliated, tortured Jesus to the world. What they are saying is, “We are not afraid.”

How wonderful this is, by the way, in light of the Charlie Hebdo tragedy and the controversy over the Dutch cartoonist’s mocking depictions of the prophet Muhammad. Christians don’t fuss particularly about insults to Jesus, for we reverence a depiction of the insulted Christ as our most sacred icon. We can say, with Paul, “I am certain that neither death nor life, neither angels nor principalities, neither height nor depth, nor any other creature will be able to separate us from the love of God in Christ Jesus our Lord” (Rom. 8:38-39), for we know that the world killed Jesus but God raised him from the dead.

Just before their throats were cut, many of the murdered Coptic Christians could be seen mouthing the words “Jesus Christ” and “Jesus is Lord.” The first of those phrases is a rendering of the Aramaic Ieshouah Maschiach, which means “Jesus the anointed one” and which hearkens back to King David, the paradigmatic anointed figure of the Old Testament. The second phrase is one that can be traced to St. Paul’s kerygmatic cry Iesous Kyrios (Jesus Lord!), which was intended to trump a watchword of the time, Kaiser Kyrios (Caesar is Lord). In short, both declarations assert the kingship of Jesus, but what a strange kingship! The new David reigns, not from a throne, but from a cross; the one who trumps Caesar doesn’t lead an army, but embodies the divine forgiveness.

The ISIS barbarians were actually quite right in entitling their video “A Message Written in Blood.” Up and down the centuries, tyrants and their lackeys have thought that they could wipe out the followers of Jesus through acts of violence. But as Tertullian observed long ago, the blood of the martyrs is the seed of the Church. And they were furthermore right in sending their message to “the Nation of the Cross.” But they should know that the cross taunts them. 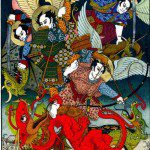 February 25, 2015
A Medievalist Considers Inculturation in the Sacred Art
Next Post

March 3, 2015 Look up from your phone; see someone; smile. That's Communication.
Browse Our Archives
Related posts from The Font