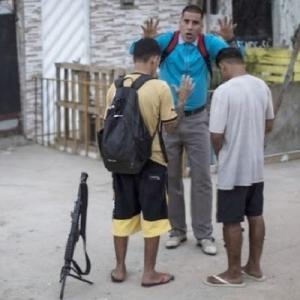 Brazilian history since the Colonial era is marked by the enslavement of Africans and by institutionalized racism which has permeated the social fabric of the nation. As such, Afro-Brazilian cultural expressions are often seen as demonic, stigmatized as evil emanating from malignant spirits. Capoeira, samba, and maracatu, even if they are very popular, are seen as manifestations related to the world of evil. But it’s in the realm of Afro-Brazilian religions that intolerance and racism become most virulent.

In the specific case of the favelas (slums) of Rio de Janeiro studies show Neo-Pentecostal gangsters have largely replaced older gangs that identfied more with Afro-Brazilian religions. The conversions of members of the “Bandits of Jesus” allowed them to develop a more positive image among residents of the favelas, and they were welcomed into the churches in part for their ability to provide protection services for members and especially church staff. In this way the religious affiliation of narcos can be beneficial for their business. The bonds formed in the churches afford mutual protection in which the code of silence on the part of members helps protect the Neo-Pentecostal narcos from law enforcement and rival gangs. Neo-Pentecostal discourse, rooted in Prosperity Theology, focuses on attacking religious rivals, most importantly Umbanda, Candomble, and Catholicism.

In the case of Afro-Brazilian religions, NeoPentecostal discourse is particularly aggressive, feeding off the Brazilian imaginary in which they are viewed as demonic faiths and as such must be combatted and destroyed. Church members must be divine agents  who destroy terreiros (the worship places of Candomble and Umbanda) and Afro-Brazilian “idols.” In this Holy War the narco-converts are the powerful foot soldiers accessing their criminal networks. Among the Neo-Pentecostal criminal groups “the Jesus Gang” of Rio has made recent headlines for conducting a campaign of religious terrorism against Candomble terreiros in the Rio district of Duque de Caxias. 21 members of the Jesus Gang were arrested with 8 being jailed and one killed by Rio police. The leader of the Jesus Gang, known as `Peixão´ (Big Fish), is also a member of the Pure Third Command (Terceiro Comando Puro [TCP]), a powerful Rio crime syndicate.

The TCP ranks as the third most powerful crime syndicate in Rio and has a strong Pentecostal imprint. It seems the the TCP was born of a split with the Red Command (Comando Vermelho) in the 1980s. Fernando Gomes de Freitas, aka Fernandinho Guarabu, is one of the most prominent leaders of the gang. Rio police estimated in 2007 that he was earning at least $36 million a month from drug trafficking and other illicit activities headquartered on Ihla do Governador, close to Rio’s international airport. That same year Fernandinho converted to Pentecostalism and as proof of being born again he had “Jesus Cristo” tattooed in big print on his forearm.

Unfazed by their own demonic activities, the TCP and Jesus Gang have been carrying out a terrorist campaign against Umbanda and Candomble terreiros in the barrios under their control. In the prisons, where many narcos convert to Neo-Pentecostalism, pastors demonize Afro-Brazilian religions preaching that the Exus (liminal trickster spirits) of Umbanda, for example, are the cause of their suffering. Once out of prison, the new converts join the Jesus Gang and others that raid the terreiros with the goal of chasing them out of the barrios under their control. The Holy War against the priestesses and priests of Umbanda and Candomble isn’t only aimed at extirpating the ‘evil spirits’ from the barrio but also fortifying Pentecostal dominion by imposing their evangelical faith as the hegemonic one in the barrios under their control.

Even though Pentecostal gangs have been persecuting followers of Umbanda and Candomble for more than a decade now, there’s been an uptick in raids and desecrations of terreiros in Rio since Jair Messias Bolsonaro became president. The “savior” of both the nation and Evangelicals, Bolsonaro was elected with 70% of the Evangelical vote and undoubtedly with at least 80% of the Pentecostal electorate who constitute 75% of all Brazilian Protestants. With a president who shares their faith, having been baptized in the Jordan River by a Pentecostal pastor, the bandits of Jesus feel newly empowered to eradicate the Candomble and Umbanda terreiros from their zones of influence. It isn’t hard to imagine that the Neo-Pentecostal Holy War prosecuted by the foot soldiers of the Jesus Gang and their ilk will only intensify during Bolsonaro’s term. 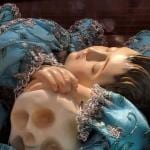 August 16, 2019
Holy Child of Raffles - The Mexican Christ Child Asleep on a Skull
Next Post 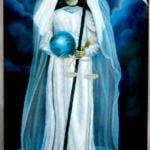 October 1, 2019 Mexican Folk Saint Santa Muerte - The Fastest Growing New Religious Movement in the West
Recent Comments
0 | Leave a Comment
"Dirt cheap labor???? You meant free labor right? I expected nothing less from your kind!!! ..."
stol3nafrikan How the Polish Black Madonna Became ..."
"Well, people who leave the Church often say it’s because they weren’t being fed The ..."
RPlavo . Catholic Decline Continues in Latin America ..."
"Fine artcile, but the title is Quite misleading,,, implying that the blame for Catholicism's decline ..."
Doug Thatcher Catholic Decline Continues in Latin America ..."
"And this, is the cousin of Pachamama."
Mamas kid Death on the Road – A ..."
Browse Our Archives
Related posts from The Global Catholic Review