The President #Wins With Actual Traditional Values… From The Christian Left 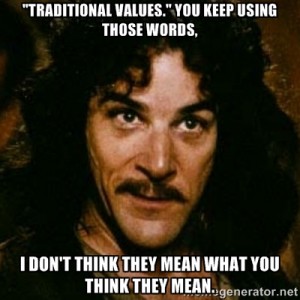 For far too long, we’ve been hearing political pundits who lean right and the talking heads on Fox News throwing the words “traditional values” around like a frisbee.

When right-leaning thinkers say “traditional values” it’s code language for “the things we want in the United States.” If you push them on it a little, they are even likely to concede that they are talking about values derived from the Bible.

To paraphrase Inigo Montoya from The Princess Bride, “You keep using the Bible. I do not think it means what you think it means.”

A few days ago, President Obama gave a prime time speech announcing an important and historical move on the part of the Executive branch of our government.

Not surprisingly, much of what Fox News would have you to believe is the “liberal media” did not even bother to air the speech.

So, you may not have heard that in that speech, the President finally gave conservatives what they’ve been asking for for a mighty long time: traditional values from the Bible.

As you would probably expect, the conservative media took note and responded quickly to the President’s use of traditional, biblical values. As a matter of fact, they responded a lot – almost incessantly.

Here’s the thing: they did not like it. At all. Not one little drop.

Tucker Carlson, a favorite commentator of many conservatives, responded to the President’s use of traditional, biblical values saying, “this is the Christian Left at work, and it’s repugnant.”

On behalf of the other co-founders of The Christian Left and all of those who identify with our movement – thank you, Tucker Carlson, thank you.

The good news is that you’ll be seeing more and more of us.

You see, as more and more people recognize that you are not actually interested in traditional values but rather you just want to push through your own agenda with conscious disregard for how much it hurts other people, the ratings of Fox News will continue to slip.

As conservative churches continue to cherry-pick Bible verses to suit their own causes and to try to manipulate their members into unloving acts, younger generations will continue their exodus from the Church.

And, us? The Christians Left?

We will just keep on loving them. All of them.

We will practice real traditional values. Biblical values of hospitality, kindness and love.

We will continue to work to feed the hungry, shelter the homeless, welcome immigrants, forgive others, embrace outsiders, share with those in need, advocate for the marginalized, confront those abusing power, and, yes, even value Other Religions.

Thank you Fox News and Tucker Carlson, we appreciate your recognition.

Thank you Mr. President, The Christian Left appreciates your traditional, biblical leadership on the issue of immigration.

And if we may be so bold, Mr. President, we’d like to quote a verse you referred to in your speech: Exodus 23:9, “You shall not oppress a resident alien; you know the heart of an alien, for you were aliens in the land of Egypt.”

Our President has made bold and much needed steeps to restore the traditional, immigrant sensibilities of our nation, but they have not gone far enough. The Christian Left would like to encourage you, Mr. President, to push even further so that we do not oppress those hoping to immigrate to the United States.

As our society begins looking toward Christmas, it is sobering to realize that today, Jesus, Mary and Joseph would probably be turned away at our borders.

Again, thank you, Mr. President. There’s still much work to be done and The Christian Left has got your biblical back.


Consider supporting Mark’s blogging. Help create a market for Progressive Christianity. Not through big publishers or big denominations, but through the grassroots. We need to encourage the growth of progressive Christian voices in the marketplace. Even a dollar will help. 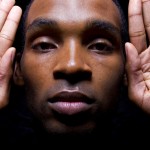 November 25, 2014
#Ferguson and America's Problem With Justice
Next Post