#Ferguson and America’s Problem With Justice

Patheos Explore the world's faith through different perspectives on religion and spirituality! Patheos has the views of the prevalent religions and spiritualities of the world.
Is it not grievous enough that, two months ago, we left a child in the street to die; but now have placed justice alongside him to perish?

How ironic that the Ferguson decision arrived the week of Thanksgiving. Perhaps it is not so ironic. Perhaps it is the not-so-gentle reminder that we need – that we deserve — as a nation.

Maybe it can serve as a reminder of our long and fabled relationship with justice in the United States.

I am worried that it is too late for justice now– by about 220 years. We founded and built this nation on actions of injustice. Perhaps it is folly to believe we can ever escape injustice’s gravitational pull.

I would not say that I am hopeless, nor would I say I am hopeful. Perhaps it is enough to say, “I hope.”

Or, perhaps, it is most honest to say, I struggle to hold on to hope as I work to help create it.

The problem Ferguson shows us is this: when you remove justice, you cannot build the nation of which we once dreamed. Life, liberty and the pursuit of happiness are predicated on a firm foundation of justice.

But, our nation has become hopelessly lost as the powerful wield justice like a weapon.

Our social system has become almost entirely economy based, so it should not be surprising that American justice is now a commodity to be bought and sold.

It should not be surprising.

But it should not be accepted.

We must remember that equality is a necessary component in the equation of justice.

The more we allow race, sex, creed, sexual orientation or any other false measure of a person’s value guide our internal sense of justice, we cannot ultimately expect justice to truly be present in our communities, let alone in our courts.

However, this is not a call to violence, unless it is an internal violence directed at the biases and judgmental perspectives we each can hold about others.

The problem with trying to extract justice through violent means is that violence directed at people is itself a breach of true justice.

We must always be mindful that, as the Reverend Dr. Martin Luther King reminded us, “violence begets violence.” It should never be the next solution or the easy resolution.

At the same time, it would be folly not to recognize, that violence may very well be the only means the powerful can actually hear from those they hope to lord over.

If violence is used, and at times it must be, it should be a tool of last resort; and the powerful must realize that when justice is removed, they force the potential of violence.

If we must resort to violence, we must be careful about the direction in which we point the weapon. We must not point it at people but at systems of injustice. They are the enemy.

We must address the systemic injustice that is inbred into our society.

During the week of Thanksgiving, of all weeks, surely we can see the long history of this nation of building itself up on great acts of injustice. Surely as we see righteous civic unrest build, we can see the accumulated injustices of day-to-day life, which were the inspiration for the white men who penned our founding documents and shaped what the execution of justice would look like in this nation.

If we truly want ALL of our children to live, it may be that we must be willing to let die the systems of dominance which govern us.

If we truly want justice, it may be that we must be willing to fully disengage ourselves from systems of governance based on power and formed by men who daily exercised extreme injustices.

If we truly want justice, we must admit that the system we have is perfectly designed to give us the results we consistently receive.

If we want justice, we must be a part of the change.

The question you must ask, “Do I truly want justice?”


Consider supporting Mark’s blogging. Help create a market for Progressive Christianity. Not through big publishers or big denominations, but through the grassroots. We need to encourage the growth of progressive Christian voices in the marketplace. Even a dollar will help.

November 21, 2014
The Rise of “The Dones” as the Church Kills Spiritual Community
Next Post 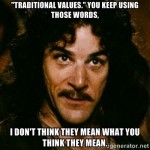 November 25, 2014 The President #Wins With Actual Traditional Values... From The Christian Left
Recent Comments
0 | Leave a Comment
Browse Our Archives
Follow Us!

Stop Telling Me about the "Lazy"...
Honest to God
Related posts from The God Article with Mark Sandlin