Organic, Free-Range Church: Where the Church Goes From Here

Editors’ Note: This article is part of the Patheos Public Square on the Future of Progressive Christianity in America. Read other perspectives here, after 5 pm MT, Wednesday.)

What if the people leaving the Church are the collective voice of God to us, the Church, today?

In May of this year, Pew Research released a report confirming what many of us already believed about the exodus from churches and the continued expansion of the Spiritual But Not Religious (SBNR).

We’ve never seen an exodus of this degree in modern times. It is significant and it will, ultimately, play a major role in shaping spiritual communities going forward.

You see, the folks walking away from the Church aren’t doing it all willy-nilly. A surprising number of them tried to make church work. The problem is, they kept banging their collective heads up against ugly walls like misogyny, racism, bigotry, homophobia, spiritual, physical, and emotional abuse, a severe aversion to change, inflexible hierarchical power structures, and hypocrisy in general.

But, the Christian faith should imitate Jesus and the Spirit – standing over and against the status quo with a propensity for doing its own thing in the name of love.

The longer an institution is established, the more mired down it becomes with dogma and the more it comes to expect unquestioning obedience – the very things Jesus challenged about the religious authorities of his day.

Could it be then, that those questioning Christianity are much like Jesus, acting as the contemporary voice of God as it criticizes an established religion for forgetting its roots: grace, love, inclusion and forgiveness?

The SBNR are the fastest growing segment of believers in the United States and if we listen closely, we will not only hear the voice of God, but we will hear an echo of Jesus’ condemnation of an established religion that had come to allow structure, dogma and conformity to trump people, community and love.

This exodus is a call to turn the Church upside-down on its steeple, to strip it bare of its robes of privilege, to take the teachings of Jesus out of the confinement of church walls and into the streets and bars and soccer fields.

It’s a call to put people above polity, practice above preaching, inclusion above exclusion, love above law.

Sadly, I believe Christianity’s spiritual reboot is going to “leave behind” countless existing churches. Oh, they’ll be around, slowly dying while clinging to institutionally defined priorities and perspectives.

And that’s the irony of the situation: institutionalized Church’s unwillingness to change has caused unavoidable change. Small churches are closing every day and large churches are slashing budgets and laying off staff.

In the last church I served, one person put it bluntly, “I’d rather lock the doors, than change.” Prophetic.

But, the SBNR are moving on. Their actions and movement away from the Church are a thunder-clap from God, a marker in the timeline of faith, a clear sign of a new beginning.

After all, at the core of Christianity is the understanding that where there is God, hope is never lost – endings are never final.

I believe that what we are witnessing is not, in fact a final exodus, but a reclamation of our faith in its original form.

Many believers are recognizing that not only do they not need the institution of Church, but it frequently prevents them from truly following Jesus.

It’s only a matter of time until they begin to feel the pull to belong to a spiritual community again. Some will give the historic Church another try, but most of those folks will bump their heads on the same old bulkheads they did a decade ago and they’ll be reminded not only why they left, but that the system is too rigid to change.

We have begun to see spiritual communities forming organically, outside of the precepts and control of established denominations. Think of them as free-range faith groups.

They form from the bottom up, rather from the top down. Power will not be primarily held by a few people “on top,” but rather, in concert within the community, and even then will be held rather loosely, preferring to let love, need, and grace rule the day.

They will form more organically without all the additives and preservatives the Church now has.

These new faith communities will be malleable and flexible — exactly opposite of the structures of contemporary Christianity. The composition of the groups will ebb and flow freely with the natural rhythms of modern day life.

Because of their organic, free-range disposition, few of the communities will look the same or operate the same and by their very nature will never grow very large.

I am somewhat saddened by the inevitable decline of the historic Church of Christendom. Not only has it been a primary component of my life’s formation, but I have also studied and trained and worked to make it my place of vocation.

Yet, at the same time, I have hope.

Through the confusion and pain and noise of the exodus, beyond the thunder claps, I hear the God of Isaiah proclaiming, “Behold, I am doing a new thing.”

Hope for faith communities created through similarities rather than highlighting differences. Hope for groups that welcome all people without the unreasonable burden of learning prescribed ways of practicing our faith and expressing our beliefs. Hope that following Jesus and growing closer to God will be experienced intimately in everyday life rather than primarily in the sanctuary of a church, once a week, and in accordance with a universal mandate.

Hope that, in the end, love truly does win. 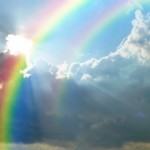 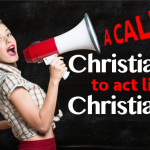