What Do You Do With A Spoiled Child?

Many of us have experienced that spoiled child [Harvey Karp, MD, creator of The Happiest Toddler on the Block DVD and book, says, “A spoiled child is one who’s demanding, self-centered, and unreasonable”]. You know, that one child standing in line at your local grocery store. That child, that one child that gets on your last nerve. It never seems to fail, you’ve had a long hard day and you find yourself standing behind some child demanding they get it their way, and acts out while bring you into the middle of their storm. Insisting on get what they want, and in turn insulting their respective parent because they are no getting what they want. Now, before I go further, let me say that by “Spoiled” I mean a crying, whiney, self-centered, unreasonable child who insists they have all the answers, they demand people look at them, and give them what they want; and when I write “Child,’ I mean Donald Trump. When I write “Parents” I mean the Republican Party.

If you’re like most people, you ignore the problem and simply think it’s the parent’s responsibility. This is Donald Trump, a spoiled child who became a spoiled adult, who, when he acts up, we expect this parents [the RNC] to deal with it. While he is actively banging his small hands on the podium showing his temper, threatening others, insulting everyone he can, and belittling too many people, and groups, to count, many simply stand by and think, ‘It’s the parent’s responsibility.’ The problem with that is, their lack of action effect all of humanity, as the child disrupts everything, and everyone, around them – we’re all affected. Besides, we need to take into account the reality that if the child is so spoiled they act out in public, it was bad parenting that caused the issue in the first place. So, we know the parents will do little but feed the tantrum. Cooler heads need to take control of the situation, even if the parents think you are interfering with ‘their child’ and ‘their responsibility.’ Sometimes bad parents need to be told they are bad parents – RNC, you are very bad parents.

Now, we could blame culture, because today children have virtually everything they want at their fingertips; and we all know if you can do anything you want, you tend to be demanding when things don’t go your way. But it goes deeper. As adults, we need to encourage manners, and bring about good values in our children – and in this case, our Elected Officials [I was going to say, “Political Leaders” but, as I’m sure you will notice, we don’t have many Leaders in political positions]. We have to remember that an entitled attitude is simply unacceptable – and dangerous.

One of the best things you can do with a spoiled child is say “NO.” So, Mr. Trump – you want my vote? NO. 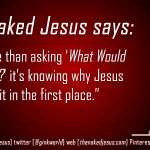 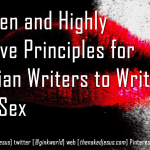 August 12, 2016 7 Proven and Highly Effective Principles for Christian Writers to Write about Sex
Recent Comments
0 | Leave a Comment
"progressive churches lose a lot of adherents to "noneism" because they encourage them to think ..."
crackerMF “Why Are You NOT Evangelical?”
"evanjellycals are the reason 25% of americans now report their religion as "none".the hypocrisy and ..."
crackerMF “Why Are You NOT Evangelical?”
"all of religion is an enormous echo chamber.it constantly shouts evidence free claims and listens ..."
crackerMF “Why Are You NOT Evangelical?”
"agreed with everything but ignorance since they can be educated and cured."
Brandon Roberts I’m Not Sure Tolerance Is The ..."
Browse Our Archives
get the latest from
Progressive Christian
Sign up for our newsletter
POPULAR AT PATHEOS Progressive Christian
1

A spy in the house of...
slacktivist
Related posts from The Naked Jesus