Could Not Come Up With A Title

Ever wonder how Calvinist, Reformed, or Neo-Reformed Theology has screwed up the teachings of Christ? I have, and I’m pretty sure others have. Now, I’m sure those who subscribe to such thought will say I’m wrong, or worse – evil and dammed for thinking this way, so be it. Let me share with you what I see as a core problem in much of those theologies: It’s Self-Centered.

Let me explain; according to western culture, what you accumulate, how hard you work, your individualism, and what you save, defines how blessed you are. The idea of giving away what you earned, seem weird. You can find all those qualities floating around many churches, and in many neo-reformed thought. It is embedded in western thought, if someone takes something that belongs to you, you demand it back, it’s yours. These ideas are central to what has been called The Protestant [Puritan] Work Ethic [Coined by Max Weber in his book The Protestant Ethic and the Spirit of Capitalism]. The more you have, of anything, you are considered a successful, the elect, the blessed. What is yours, is yours. YOU define YOUR life, and what YOU own is used. But how does this idea center in the teachings of Jesus found in Luke, when Jesus says, “Give to everyone who asks of you, and whoever takes away what is yours, do not demand it back.” [6:30]? It seems we have intertwined the idea of accumulation of wealth with what has been called Christianity.

So, why am I picking on Reformed/Neo-Reformed/Calvinist Theology? According to many scholars, those theologies have been central to the ideas surrounding Capitalism; R.H. Tawney, accepting Weber’s thesis, in his book Religion and the Rise of Capitalism argued the political pressure, social pressures, and the spirit of individualism with its ethic of self-help, coupled with a strong desire for frugality [significant factors in Calvinist thought], were central to the development of Capitalism. One could say that Calvinist thought accepts the idea that it is better to accumulate wealth, then it is to be poor; and that the rich are better than the poor. This idea is found in the teaching were only those who were predestined [think of it as Calvin’s concept of double predestination] to be saved would be saved; the elect. While many saw this idea as righteous, there was one huge problem [besides the fact that it does not follow the teachings of Christ], there was no real way of knowing who was, or was not, the elect. There needed to be a way to know; after all, if the Divine is not sharing with you who is in, or who is out, you need to figure out a way to second guess the Divine, and know who is a “true follower.” Knowing who was in, or out, had to be based on external measures as a way to see who was truly holy.

Those saved were seen as the most successful people, those who worked hard, made money, had an independent life view, and were frugal in their giving. Those who accumulated wealth were considered holier than those who gave it away, or the poor in general. This hold-over of the idea is found in how we, as a culture, view the poor – not wanting them in MY park, MY streets, MY community. We find ‘theological’ reasons not to help, which runs counter to what Jesus shares in Luke’s recording of the life and ministry of Jesus. “The man who has two tunics is to share with him who has none; and he who has food is to do likewise.” [3:11]

Defining who we are, by what we have runs counter to the teachings of Jesus. While having personal wealth is not wrong, it is wrong if all you do is accumulate massive wealth. Some will say, ‘The rich help in many ways’ – really? Does one truly need a Billion Dollars? Does one truly need a Hundred Million Dollars? All we ‘need’ is a place to live, food to eat, and a way to get around. In Luke’s recording of the life, and ministry, of the First Follower, he has Paul explaining hard work is fine, but if you ignore those who are in need, you violate a teaching of Jesus, which Paul says is “It is better to give, then to receive.” [20:35] 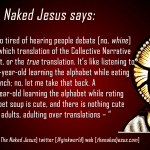 October 4, 2016
Who Cares What Translation You Use
Next Post 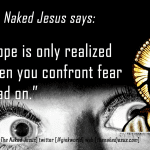