A Deep Dive on Thanksgiving

Here in America, Thanksgiving holiday is nearly upon us. It is the time of family, football, and food.

This holiday is different because it is always on a Thursday. That might seem like a small thing, but many people get a four-day weekend(1). For the working stiff, this is often the best chance to return to distant family for a visit.

For many, the return home is not an easy experience. While it is good to see those we love, it is also a time of tension. We put a lot of effort into making the journey, but more avoiding conflicts with our relations.

Thanksgiving is America’s harvest festival, and it harks back to our history as an an agrarian society. That sounds nice. But that agrarian history is at least half of what “liberal” America has been rebelling against for the last fifty years. No wonder we city-people find the holiday a challenge.

There is no doubt that relationships with family can be tough. For the spiritually called, the gender-queer, and black sheep in general, those challenges have often been resolved by pragmatic distance.

The Other Side of the Hedge focuses on self-cultivation. It offers magical practices for living with virtue and in some kind of harmony with the world. Thanksgiving is the perfect opportunity to try to put some of this into practice.

Thanksgiving can be hard. It is a return to the past in two different ways. One is personal, and the other is more cultural in nature.

On a personal level, many of us return to our parents’ homes for the holidays. This is not just a physical return, but also an emotional and spiritual one. The ghosts of our pasts come to haunt us, and we can find ourselves deep in childish dumb-ass-ery that we thought long resolved. Ah, family.

But Thanksgiving is also often a return to the values of the past. Few of us live with extended family, rather only spouses, children, or families of choice.

So, when everyone piles into one house for even a day, there is nothing to do but  grasp for social rules generations out of date. Those old rules are, perforce, conservative. They link us to roles we thought long abandoned.

Why do the men congregate around football, and women around the preparation of food? Because these activities, by their nature, limit opportunities for individuality and conflict. Strict activities with narrow rules are not there to be mean. They are meant to protect us from each other.

Whatever we think of the rules of the past, they often have a certain pragmatic value. And perhaps inside them, we can see some resolution for the deep divides that we all struggle with: both the cultural divides and the isolation of the individual from others.

Life on the Farm

Though it might seem hard to believe, only one hundred and fifty years ago, in my grandparents’ grandparents’s time, America was still a heavily agrarian society.(2) That is, we lived on farms, congregated in farming villages, lived with extended families, and had the values common to agrarian societies around the world.

In general, farming societies are strongly patriarchal, with large families and low individual autonomy. These values are both created for and reinforced by the economics of small-scale farming.

People have not always lived this way. But, as a species, we have been at this for thousands of years.

For a broader perspective, farming values can be contrasted with those of horticultural societies, which tend to have stronger female social power and political participation.(3) The shift from horticulture to agriculture is defined by the invention of the plow. This is a case where technology caused deep and lasting social change.

In the history of humanity, the rise of farming went hand-in-hand with the rise of men’s power. Emphasis on new, more extreme versions of gender roles maximized production on farms, increased population, and allowed groups to out-compete other groups through simple population pressure.

World over, when it came to farming-focused societies, this had the unfortunate side-effect of dividing women from ownership of the land and crops. Women were relegated to jobs that could be managed while raising piles of children. Within the rules of society, women became completely reliant on men for access to food and other resources.

In anthropological analysis, two factors mostly removed women from farming: men’s physical strength and women’s fertility. In other words, the exact cultural stereotypes of gender that we have inherited.

Simply, plows require upper-body strength and (on average) men have approximately fifty-percent more.(4) That is, the invention of the hand-plow makes men more directly economically productive.

Also, in farming societies children become economically productive by age six. Large families become the rule, and the means to power. These two features combined to move women toward a role of raising families, and often divided them from land-ownership and political participation.

In short, American “conservative” values are farming values. And those values are not ancient history. The tipping point where more than half of Americans lived in urban areas was just before 1920, almost exactly a hundred years ago.

Not the Boss of Me

In simple terms, patriarchy (with its strict gender roles) is a direct result of the neolithic revolution. But then again, so are a lot of things. Without farming, there are no cities and no civilization.(5) One would not have happened without the other.

On the other hand, now that our culture is no longer mostly agrarian, there is no need to protect those old hierarchies as they lose power and sway. But neither are they just going to fade away.

Thanksgiving is the time of the year when we find ourselves caught between the old ways and the new. As a practitioner, it is not my role to proselytize the new or protect the old. Rather, I struggle to do my level best to meet people where they are; to treat others with respect and act with restraint and dignity myself.

As a culture, we have undergone a lot of change in a small space of time. Understanding the massive cultural changes at work around us can help us to connect with others. And perhaps the easiest, and most important, place to start is with our families.

ProTip: The Anchor of Sanity

If you are like me, there will come a time during the holidays when you have, as our parents used to say, “had it up to here!” The time to get ready for that moment is now.

Whether the technique below is a psychological trick or a magical spell is probably up for debate. Either way, it is an effective way to prevent interpersonal disagreements from spiraling out of control at Thanksgiving dinner.

Start by lying down somewhere and getting comfortable. Beginning at either your feet or the top of your head, go through each muscle in your body and relax it as best you can. If you fall asleep, just continue when you wake up. Do this until you have made it from one end of yourself to the other.

Just this relaxation technique, all by itself, is an excellent daily practice. But the next part helps make the technique “portable” — it’s not like we can go lock ourselves away in the middle of Thanksgiving dinner.

When you complete the process of relaxing the whole body, recite an anchor word or phrase. There is no need to make it fancy. For a long time, my anchor word for this state was “Home.” Now I use, “Is what it is.”

This exercise is designed to associate the word with the relaxed state. This is called an “anchor.” In just a few sessions, you will notice that you have the ability to significantly relax your body at a moment’s call.

And once you have the internal anchor set, you can even practice. To train, find something that stresses you a bit (five minutes of the news should work) and let it start to affect you. Feel your body tense. Your breath will become shallower. Your thoughts and heart rate will increase.

Next, turn off the news, sit still, take a deep breath, and recite the anchor, internally. Do so with all the authority you can muster. With a bit of practice, you will be able to feel your body relax and lose its defensive posture. You’ll be ready for Uncle Jack’s political discourse over desert.

(1) Except for most retail workers and a chunk of everyone in every service industry. If it was’t always, Thanksgiving is becoming a middle-class indulgence. That’s a blog for another day.

(2) Below is an excerpt of the percentage of the American population living in urban and non-urban environments. For additional details see Urbanization in the United States.

(4) Discussions of sex and gender are fraught, and both the science and the interpretation of data are complex (and often political). That being said, American agricultural society (and many agricultural societies) have been uninterested in such complexities.

(5) Perhaps in my younger years, I would have pooh-pooh’d civilization. That was pretty edgy view back then. Whatever wisdom middle-age brings, I can see that civilization is just a tool, and a pretty advanced one for a bunch of primates. It has no moral value, and if it did, there would be no way to honestly judge it from the inside. 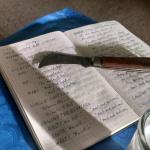 December 2, 2018 On Developing Skill in Magic
Recent Comments
0 | Leave a Comment
"That world is real, but never forget that it requires constant vigilance. Those redwoods were ..."
Falkenna Animism among the Redwoods
"Love spells, divination, reincarnation At reasonable feeContact Spellmh.weebly.com For more details"
Lily Dean A Deep Dive on Divination
"Bosh.As Morning Glory Zell once said to me, "If you can't do it with a ..."
Mark Green Making and Using Magical Tools
"Hi Melissa,Thank you for reading. Other aspects of my life have been demanding my attention ..."
Christopher One Thousand Days
Browse Our Archives
Related posts from The Other Side of the Hedge