The Peripatetic Preacher. Get the Shots Already!

Like many of you, I have been deeply distressed that the vaccination goals established by the Biden White House have fallen short, and, as a direct result, the COVID-19 Delta variant is now exploding, primarily in the non-vaccinated population. The figures of the problem are alarming, but not unexpected. Of the increasing number of infections, in some places fully three times what they were a month ago, coupled with increased hospitalizations, and it is feared increased deaths, over 99% percent of these cases have occurred among the unvaccinated. Could anything be made clearer? Go now, today, and get a shot, and if you have access to one of the two shot choices, make certain you schedule and go to a second appointment to complete the regimen. US America has ample vaccines available, and they are free. Good heavens! What more incentive do you need, people?

I am fully aware that various news outlets have in recent days pushed any number of vaccine myths to add to the earlier wild tales—Bill Gates” microchips, the dangers of autism, the fears of “big government” telling us what to do. What big government, and I necessarily include in that acrimonious term the previous administration of Donald Trump who made a grand push for the creation of these wonderful vaccines, is doing in fact is making the end of this ferocious pandemic possible. But we need more of our citizens to get the shot. There really is little to fear; the RNA technology that serves two of the reliable vaccines, is not new, but has been in serious research for four decades. Those who continue to think the vaccines were somehow “rushed” do not know what they are talking about. They are both wonderfully safe and wonderfully effective. My wife and I had our jabs of Pfizer on two days in February, and had no ill effects whatever; I did not even have a sore arm either time.

I understand that there are some among us who cannot receive a vaccine due to immunocompromised systems and must as a result remain isolated while the virus rages. But that number, while vastly significant to them, is small and should have no effect at all on those who are eligible—currently down to age 12. I also know that some have religious objections, and I wish to respect those. In our country serious objections must be taken with utmost concern. However, when those groups are considered, that leaves a huge swath of US Americans who simply refuse, on spurious grounds, I fear, to get the vaccine. As a result, here in Los Angeles, beginning at midnight tonight (July 17), we are being mandated again to wear our masks indoors, whether we have been vaccinated or not. This is a mandate we Angelenos will take seriously, but there is no question that if all who were eligible for the shots actually had gotten them, we could have discarded those pesky masks forever. But because those have refused, the rest of us must pay the cost. It is both unfair and infuriating, but that is the result of those who just do not get it. One would think that easily available and free would be reasons enough to get the jab! 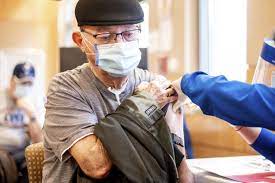 The politicization of this vaccine is depressing; it is absolutely true that those states in the country that voted heavily for Trump in 2020 have by far the highest rates of surging COVID cases. Many of these states have inoculated fewer than half of their populations, and in parts of those states the figures are even lower. So much of this disparity is the result of poor information and entrenched notions of the current Democratic administration. “If those Democrats want me to get the shots, then there surely must be something dangerously wrong with it!” COVID is not a blue state/red state divide; it is an equal opportunity disease, and it most definitely can be defeated by the vaccines we have ready to hand.

Of course, this divide, a country where people listen to wildly different versions of facts and truth, is hardly a modern invention. Those of us who love and read our ancient Bible know all too well that nearly 3000 years ago the same divide led the nation of Israel to a catastrophe, one from which it never fully recovered. The story should be instructive for those who simply will not imagine that their civic duty today involves receiving a COVID vaccine. Let those with ears—or in this case arms—hear.

After the death of King Solomon, David’s son, who for forty years ruled a united Israel from his capitol in Jerusalem, thought himself to be, for the majority of his rule, nothing less than a middle-eastern potentate. Though his “empire” was minuscule when compared with those that existed both east and west of Israel, Solomon fancied himself to be far greater in the scheme of things than he was. As a result of that fancy, he built a finer palace than his father; he constructed the temple out of the finest materials of the time, festooned with bronze and gold; he added to the armies and its weapons; he fortified any number of towns and cities; he increased the size of his royal harem that in the end included more than 1000 women, both foreign and Israelite, a living symbol of the king’s greatness. Of course, to sustain all these luxuries, all this grandness, Solomon was forced to increase taxes and to demand forced labor from nearly all able-bodied Israelites, fulfilling thereby the warnings of old Samuel when the people had first asked for a king (1 Samuel 8:10-18). As a result several rebellions occurred against Solomon, the most serious led by a man whom the king had made “head of all forced labor in the house of Joseph” (1 Kings 11:28), named Jereboam. Though Solomon sought to put the rebellion down, and to kill its instigator, Jereboam escaped to Egypt and found refuge with Pharaoh Sishak.

At Solomon’s death, his son, Reheboam, took the throne. When the exiled Jereboam heard of Solomon’s end, he returned from Egypt and confronted the new king, asking him to “lighten the hard service of your father and the heavy yoke he placed on us” (1 Kings 12:4). If Reheboam would simply ease up on his father’s unworthy demands, Jereboam promised the new king his service. Reheboam asks Jereboam for three days to think over the offer. He first consults his older courtiers, those who had served Solomon, but who had remained at court with the new king. They urge Reheboam to do as Jereboam has asked, since if he does so, “(the people) will be your servants forever” (1 Kings 12:7). The advice is prudent, but just to be sure, Reheboam turns to his younger courtiers, those who had grown up with him in the palace, those with less experience of the realities of the world. They advise Reheboam not to listen to Jereboam, but instead vastly to increase the cruel demands of his father, thereby asserting his royal power. The colorful way Reheboam rejects Jereboam’s sage advice is to say, “My father reproved you with whips, but I will reprove you with scorpions” (1 Kings 12:11).

The sting of Reheboam’s rash words force Jereboam and his many followers to reject the Jerusalem court completely and to head north where they establish a new court and country, a land that will exist for the next 200 years. Thus, a refusal to accept wise and tested advice led to the dissolution of Israel, north and south, and was the main reason for the nation’s primary inability to come together in the face of future threats; northern Israel was obliterated by the Assyrians in 722BCE, while Judah and Jerusalem survived, though seriously weakened, until 587BCE when the Babylonians put an end to the tiny nation.

Our US American divisions hold the same dangerous future, exemplified by millions of our citizens who refuse to be vaccinated. Unless those many holdouts finally roll up their sleeves, we are doomed to live precariously with COVID and its ever evolving variants. Who knows how much more perilous those variants could become? But with no unvaccinated hosts to infest, COVID will eventually become what flu strains or measles are for us, namely irritants, but far from deadly viruses that live among us under our control.

I lived through the 1950’s polio scare. In fact, One of my third-grade classmates got that terrible disease, throwing up his lunch at my table. All of us in the class soon had to endure two massive gamma globulin shots, and when Jonas Salk developed his wonderful vaccine, we all gladly took it as soon as it was available. The nation knew then that all needed to be protected. The same is true now; all must and should be protected against this monstrous disease. So, if you are physically able, get the shot already! Do it for yourself as well as for your neighbors, friends, and strangers who live among you. Do not risk your life nor theirs. This vaccine is nothing less than a gift from our God, so get it today! 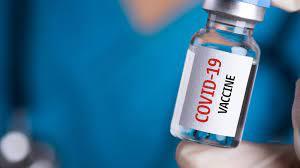 July 15, 2021
The Peripatetic Preacher. In Solidarity with Creation
Next Post