My barber’s name is Steve. Looking at my picture (see left), you could imagine that my need for a barber is quite minimal. I have been follically challenged for well over a decade, getting my hair look from my mother, who wore a wig for the final years of her long life. Thus, my hair-growth days are past, at least on the top of my head. I have suggested to several barbers that I will gladly pay them for their services with a penny per hair; they soon realized if they take me up on my offer, they will lose money. However, I do have a beard, which does at least become bushier, albeit little longer, each passing day. Hence, I do need that trimmed as well. And so barbers over the years have done, helping me to look cleaner at least, if no more hirsute.

When I lived in Dallas from 1968-74, and again from 1979-2016, my wife Diana first regularly cut my hair, watching with me as it made its inevitable retreat up my widening scalp, like a losing army quitting the field of struggle. Finally, she decided that she could no longer do that job, and urged me to find a barber. I went to a shop directly across from my place of work, Southern Methodist University, one day and was randomly assigned an available barber. Gerard, a man born in the Netherlands, who had seven brothers, six of whom were barbers, and all of whom lived now in Memphis, TN, became my barber for the next decade. His shop catered to the wealthier and well-connected clientele of Highland Park, a rich enclave in Dallas; Roger Staubach, Dallas Cowboy quarterback and successful real estate mogul, was a regular customer, as was Tom Landry, the famous Cowboy coach, the president of SMU, and other celebrities of the city. Politics in general tended to be conservative in the shop, but Gerard was not; he soon discovered that neither was I. Hence, we would discuss the times, often in rather low voices, sharing our decidedly liberal views with one another. Gerard was hardly loquacious and rarely started our conversations, but he did become an American citizen while I was his customer, primarily, he said, to be able to vote for Barak Obama for president.

When I moved to Los Angeles in 2017, I needed a new barber. The first shop I went two once or twice did not seem like my scene; the barber was a former boxer and many of his clients were boxers or ex-pugilists. I am definitely not a boxer nor a fan of the bloody sport, so I had to look elsewhere. It was then I found Steve. I could walk to his small shop, which was a great plus. But I soon learned just how remarkable a man Steve is.

His father had been a barber, and when Steve finished High School, he went to work in his father’s shop, cleaning up at first, and finally taking up the scissors himself. That was over 50 years ago! In fact, his father’s shop and now Steve’s has been on the corner of Beethoven and Venice Blvd for about 70 years. He is now in his early 70’s, and only working three days a week, but he plans to work until 80, he says, and must conserve energy for that reality. He has had a cancer scare recently, but appears to be in remission. His recent cataract surgery was successful, so he sees well. He has been married twice (you can learn a lot from a talkative barber), and still has a very good relationship with his first wife and his kids from that marriage; all of them still love him, he says, and they all regularly connect in one way or another. But I am most intrigued and deeply moved by Steve’s relationship to his mother. 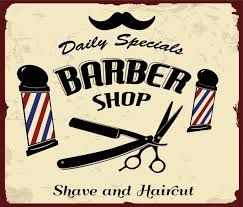 She is well into her 90’s now, and is suffering from increasing dementia. I have been going to Steve for a haircut and beard trim for about three years, and during those years, he has often shared with me about his mother’s struggles and his concern to maintain a close relationship with her. He and his second wife live in a small trailer home near a Pacific ocean beach, a place he treasures, and he has his mother stay with them every weekend, and regularly during the week. As her condition has regressed, she is no longer continent, so Steve changes her diapers. She also cannot remember her medications, so Steve makes sure she takes them. She also has a hard time eating regularly, so Steve ensures that she receives a good diet with proper food to keep up her failing strength. Steve, and his wife, have given up much of their own freedom to care for this woman, and he has never a single time said anything to me about her that suggests even a hint of resentment. Quite the opposite.

This week on Tuesday, I went for my appointment with Steve, and before I had settled in the chair, he said, “Well, John, my Mom is now in hospice.” He said this with obvious sadness, since that of course means that his Mom is nearing the end of her earthly course, but there was also in his voice a sense of joy and blessing. “You know,” he continued, “I have really gotten to know Mom over these past 20 years (he has cared for her all that time), having her near me so often. Many people really never get to know their Moms. When they leave home after High School, they may visit on occasion at holidays, or send cards on birthdays, but they simply do not know who their Moms are. I know my Mom, and that has been for me a great blessing.” I found this statement profoundly moving. Steve demonstrated to me a kind of love that exists among us, but is too seldom so beautifully expressed.

My mind went right to that wonderful expression of deep love and devotion found in the book of Ruth in the Hebrew Bible. Ruth, a foreign widow, leaves her Moabite home to follow her widowed mother-in-law, Naomi, back to her Israelite home, with few if any prospects for her future. After all, she is a woman, a widow, and a foreigner, three strikes in a patriarchal world. But she follows Naomi anyway. Upon arrival in Bethlehem, Naomi’s village, Naomi loudly proclaims to all who would listen that she “went away full” with husband and two sons, but she has now come back “empty,” completely rejecting and avoiding the presence of Ruth standing nearby. But still Ruth is not deterred and stays with her. The despondent Naomi seems ready to starve herself to death, but Ruth tells her that she is ready to go out into a field with strangers and “glean,” that is to pick up the leavings of a field set aside for strangers, orphans, widows, and foreigners. She “happens to come” to a field belonging to the redoubtable Boaz, a man revered by the community. He is immediately struck by Ruth, and on her first day in his field, he invites her to share lunch with him. Ruth is rightly astounded that the field’s owner would recognize her in any way, but Boaz has heard about her enormous gift of her aid and comfort for her mother-in-law, and sees that she is a woman to be reckoned with.

However, some time passes, and Boaz does not press his interest in Ruth, so Ruth is forced to act in a way that is dangerous and scandalous in Israel. She dresses up in her finest clothes, goes down to the threshing floor where the harvest is made ready for use, where she lies down next to a sleeping Boaz and invites him to a marriage! He accepts readily but warns Ruth of another man who in the custom of the time has a nearer right to Ruth’s hand. However, that man declines to marry Ruth, once it is pointed out to him by Boaz that Ruth may not at the moment have children, but if she and this other man have a family, it is the child of the marriage, and not the man himself, who will inherit Ruth’s property. The other man declines Ruth. Hence, Boaz is now free to marry Ruth, which he does, and the marriage is very soon blessed with a son, whose direct descendant, we are told, will be David, Israel’s greatest king. But the story is in the end not about that, nor is it about a love affair between Ruth and Boaz. No, the women of the community on the day of the child’s birth proclaim the central point of the tale. They turn to Naomi and say, “Your daughter-in-law who loves you, who is more to you than seven Israelite sons, has borne him.” Ruth is indeed more than seven sons of Israel, a clear patriarchal mouthful! And that is so because the entire story has been driven by Ruth’s unstinting and unchanging love for her mother-in-law. In this story, God appears in the form of a Moabite widow. And I would say, too, that in my story with Steve, God has appeared in the form of a 72-year-old barber, who has loved his own mother with a love that is both ordinary and extraordinary, and it has been my privilege to witness that love expressed to me from my seat in his barber chair. 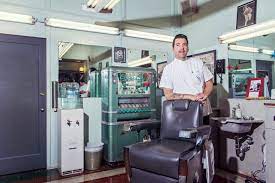 July 20, 2021
The Peripatetic Preacher Is There History in the Bible?
Next Post