Sanctity of Life: Am I my brother’s keeper?

The last time that I was at confession, I had to confess that I had missed Sunday Mass. The priest that I saw asked me if it had been deliberate on my part. I told him that it had been.

What I didn’t tell him was that it was because I believe in the sanctity of human life.

The sanctity of human life. I have a love/hate relationship with that phrase. What it means, actually means, is one of the things that I actually love about being Catholic. It is the part that makes my soul sing.

But what I hear people meaning when they say it has become screeching nails on the chalkboard of my soul.

I have heard this phrase, “the sanctity of human life,” used so often to describe the bookend points of anti-abortion and anti-euthanasia that I want to scream in Pavlovian response when I hear it.4

I had to drive to tutoring for my students this fall, some of whom go to a local Catholic high school. I had to drive through a pro-life protest where they screamed at me about how they respect life. I drove past some of those same students as I was leaving, catcalling some of the foreign exchange students I was working with who were having practice on the same day.

But, hey, they didn’t support abortion or euthanasia, so they were pro-life. Right?

I was about 12 when Matthew Shepard was murdered. That was about the same age I was when I met my first boyfriend and his older sister. His older sister, who just happened to be a lesbian. I remember watching the trial, and then the production of the Laramie Project that a local college put while I was  in high school, and not getting how anybody could have done that.

“Don’t you?” His sister asked me this while we were setting up chairs for an event. “Then, am I made in the image and likeness of God?”

“Yes.” I wasn’t picturing God with blue hair, but I knew the textbook catechism answer.

“It’s just that the person that I like is a girl. My cross to bear. Aren’t you just so lucky that yours doesn’t show?”

But her words were an earworm.

I would think that I had moved past it, and then, bam, it was there. The worst part was she was right. If I believed life was sacred, how could I judge her because she fell in love with—what, the wrong person? I didn’t know who the right person was. I didn’t know what they looked like. I didn’t really know anything about her girlfriend or their situation. I definitely didn’t know at the time that her girlfriend had moved in with her because she had been abused for what she felt, and then thrown out of her home when she came  out. Her girlfriend’s parents kicking her out and leaving her homeless was somehow more righteous than her sexuality. Abortion was wrong. Throwing your teenage child away wasn’t.

What made it worse was part of the reason that I could not shake her words. They were just too close to home. The part of home where I kept hearing from everyone how divorce was evil, even though my mother had never been able to hear me out of her right ear because my father had broken her eardrum during an argument before I was ever born. And the handful of people who insisted my father needed help, and that being away while he got it might be better than keeping the family together was  drowned out by the people who kept insisting “He only does it because he cares.”

What teenage me had to grow into hearing was that the sanctity of life is not supposed to be a slogan or a chant or a soapbox.

I’ve found that a lot of people are not comfortable ever growing into this realization. And that makes me angry and sad and frustrated all at once. This year, when I missed Mass, I got a lot of flack about that from some of the more traditional Catholics I know. But only a handful of people knew that the reason I didn’t go was because I was staying with a friend who had gone into med failure, and the side effects had her in a suicidal mindset. But my staying with her and not going to Mass? Tsk. Tsk.

So much for the sanctity of human life.

Like the bullies after the pro-life rally, these Traditionalist Catholic friends of mine  could not see how yelling at me for skipping Mass goes against what they say they believe.

And if sanctity of life is just about abortion and euthanasia for them, maybe it does go against what they believe.

But not what I believe.

I mentioned Matthew Shepard’s murder earlier. Murder is not about respecting the sanctity of human life. It never has been, ever since Cain picked up a rock and beat his brother to death with it. When I talked with my first boyfriend’s sister, she had been spending day after day at school hearing how it was a just death for someone who was unnatural. And she didn’t get away from it when we left school either. I was with her in Walmart one day when we heard this. She muttered under her breath “The blood of thy brother cries out to me from the ground.”

The lady in Walmart whom she heard talking didn’t hear her, and didn’t recite Cain’s reply to God back.

She didn’t ask “Am I my brother’s keeper?”

Maybe that is a harder line to get people to shout than “the sanctity of life.”

Maybe it is a harder line to lie about when we don’t actually live up to it.

Maybe they would have to be the ones who had to give up something they wanted in order to help someone else.

Maybe they could have seen God in the young woman they walked past that day at Walmart. If they weren’t so busy not being their brother’s keeper.

Maiasson is a fellow writer and old friend of Marie’s. Last month she reflected on the cat who kept her Catholic. Read more here. 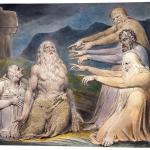 April 7, 2018
Meanderings from Mass: The Honesty of Job
Next Post 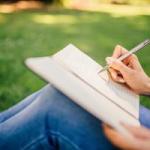