It is the apparently tenuous question so much of the debate with the sex abuse scandals surrounds:

I was just informed by the host of a popular podcast for Catholic women that we in fact don’t; at least, we don’t when it’s uncomfortable and inconvenient for other Catholics. I have followed this podcast for at least a year and was a subscriber on its email list. Yesterday morning, an email in my inbox from the podcast described this week’s episode (concerning the Church’s teaching on birth control). I skimmed to the bottom to see if I recognized the interviewee’s name, since I have a few times in the past. What I found instead made my stomach clench.

My alma mater, Franciscan University of Steubenville, was this episode’s sponsor. When I pointed out (both in private message and publicly on the podcast’s Facebook page) that having a university with an abusive past (and present!) was hurtful to victims, the response was sickening.

Shown below are screenshots from the discussion: 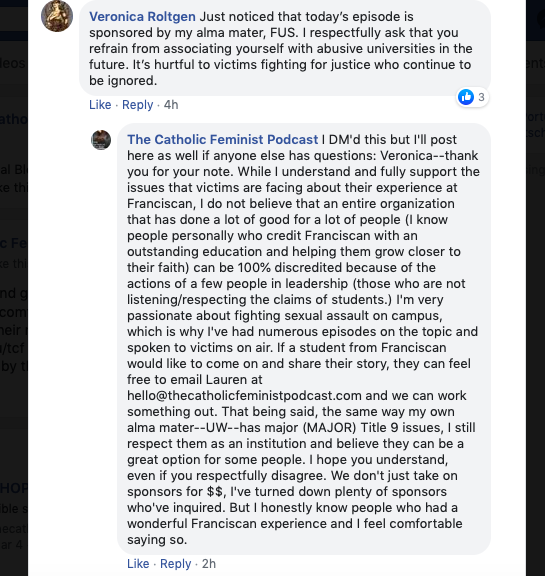 Yes, my response to this was pretty salty, but I feel that it was justified.

To say that victims’ experiences don’t measure up to all of the countless good that a university has done is dismissive, and I would honestly like to know: how many victims are necessary to make people realize Franciscan is not the perfect Catholic kingdom that it claims to be?

My own experience took place five years ago, but there are much more recent victims as well as victims from several decades before I even got to campus: read Karen’s story here.

How do I know?

Because friends have shared their stories with me, both while I was a student and after I graduated. That’s often the first step in healing, just telling another person who won’t judge you or blame you.

Every single one of these victims matter. The Catechism clearly states that “Being in the image of God the human individual possesses the dignity of a person, who is not something, but someone” (357). Regardless of anyone’s comfort level, that’s a core teaching in our Church and must be treated as such. Sure, it may be incredibly inconvenient when searching for podcast sponsors, but you can’t pick and choose when people have dignity. And blatantly ignoring victims’ pain isn’t upholding their dignity.

You also can’t pick and choose when victims’ experiences matter.

Suddenly Franciscan University claims to care about victims, after ignoring our cries for years, by opposing Cardinal Blase Cupich to come speak at the invitation of the USCCB: united-states-conference-of-catholic-bishops-stop-card-cupich-from-attending-youth-summit-7-31-8-2. Also the archbishop of Chicago, Cupich has been known as a more “progressively-minded” bishop, which doesn’t bother me at all. I appreciate that he makes a point to treat all people with respect, especially the most marginalized. Take a look at his statements here: https://www.archchicago.org/cardinal-cupich-s-statements. I assumed his stance that our LGBTQ brothers and sisters should be treated respectfully was the reason Franciscan University opposed him as a speaker, but then I saw a fellow alum’s impassioned speech about why you should sign the petition: 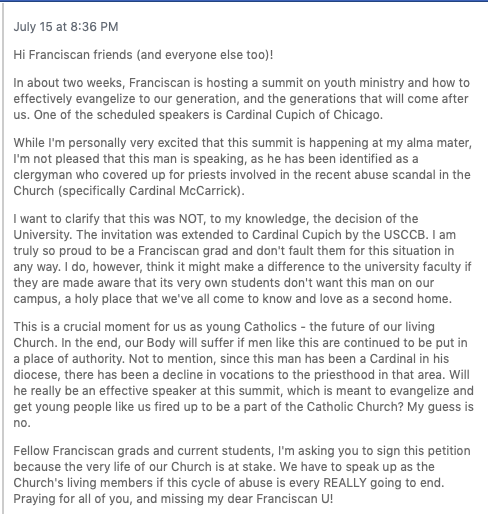 What’s the focus here? “The very life of our Church is at stake”! *gasp of horror* Sure, that statement may be true, but I think it has more to do with the ongoing sex abuse crisis and lack of respect for laity. That’s a post for another time.

I’d personally never heard this before, so I did some digging of my own and the most I found was that Cupich was in fact accused by Archbishop Vigano as being appointed by ex-cardinal McCarrick. You can read that whole shitshow here: https://www.chicagotribune.com/news/ct-met-letter-vatican-mccarrick-cupich-career-20180827-story.html

I don’t consider Vigano a reliable source of information, considering his track record with the truth. America Magazine gives a good summary here: viganos-accusations-what-we-know-and-what-questions-they-raise. Yes, it’s possible that Cupich was involved in some sort of cover up, just as it’s possible that any cleric or layperson is complicit.

I believe that we have yet to hear the last of the sex abuse scandal in our Church and pray that the truth will come out in the end. However, the point is that those who oppose Cupich aren’t all that concerned about justice for victims because justice for victims is not their reason for speaking out. They’re speaking out because Cupich is known for his controversial words and actions regarding immigration, abortion, homosexuality, and other hot button issues.

This obviously doesn’t jive with such a conservative campus that would appreciate you keep your gayness in the closet, thank you very much.

The university is free to complain about a speaker they don’t like and never asked for, but it’s insensitive to say the least to tack on the possible abuse speculations as another reason to hate this man. To my knowledge, Franciscan University has never once apologized to the countless students it has victimized over the years. When I reported my own experiences (being stalked by a student on campus and touched by a friar), I was sternly reprimanded by both the secretary and director of campus safety. I’ve heard worse stories from other victims.

If Franciscan University wants to be taken seriously, it shouldn’t utilize victims’ pain for its own agenda. If the Catholic Feminist Podcast wants to advocate for victims of abuse, it should listen to us, rather than dismiss our pain.

We matter, and we’re here. 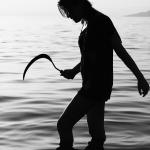 July 9, 2019
Sex Abuse and a FOCUS Missionary
Next Post 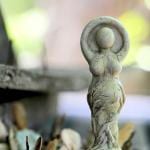 October 18, 2019 God As Mother
Recent Comments
7 Comments | Leave a Comment
Browse Our Archives
get the latest from
The Shoeless Banshee: Meanderings Beyond the Pale
Sign up for our newsletter
POPULAR AT PATHEOS Catholic
1