Mary Magdalene: Seeking Him Before Dawn 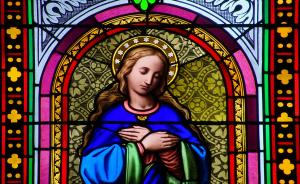 In the gospels of Easter Sunday and of the days following, we hear of Mary Magdalene’s discovery of the empty tomb and her role as messenger to the disciples. “On the first day of the week, Mary of Magdala came to the tomb early in the morning, while it was still dark, and saw the stone removed from the tomb.  So she ran and went to Simon Peter and to the other disciples whom Jesus loved, and told them, ‘They have taken the Lord from the tomb, and we don’t know where they put him.‘” (Jn 20:1-2)  Mary, in her zeal and devotion to Jesus, is seeking him before dawn, before any of the others, and discovers he is gone.  Like the wise virgins who took their lamps and went out to meet the bridegroom, she is awake and alert, demonstrating solicitous faith, hope, and charity in her searching for her Lord before all the others. After the Crucifixion, she did not give in to defeat or despair, but her hope and love continued and stirred her to action.

Everyone loves to be the bearer of good and exciting news, and Jesus has tasked Mary Magdalene with the assignment of delivering the greatest news in history: that of his resurrection and victory over sin and death.  He rewards her for her exemplary faith and dedication, her unparalleled love for him.  Because she was the first to arrive at the empty tomb, she receives the honor of being the first to announce the good news. She is sent as a messenger and a witness to alert the disciples and summon them to Jesus. “Mary Magdalene and the other Mary went away quickly from the tomb, fearful yet overjoyed, and ran to announce the news to his disciples.” (Mt 28:8)  In their great joy, the women didn’t walk, but ran to relay the news.  Jesus then appears to the women and tells them not to be afraid, but to tell the disciples to go to Galilee where they will see him, and they embraced his feet and did him homage.  In John’s account of the gospel, she does not recognize him until he pronounces her name, and he tells her not to hold on to him and sends her out to the disciples to inform them of his resurrection.

Hope Against All Hope

The women were given the privilege of seeing Jesus because they were looking for him.  The disciples were not there yet, but the women were the ones to rise early and go to the tomb to anoint his body with spices.  In John’s account of Mary’s discovery of the empty tomb, she keeps vigil outside of the tomb weeping. Her love and concern for Jesus are evident, and the angels ask her why she is distraught.  She believes they have taken his body, but was she also hopeful that he really had risen from the dead?  She remained present to him, even in the face of his death and burial.  When we face difficulties and darkness, do we retreat into despair or do we continue to look for him with hope and trust?  In light of the recent bombings in Sri Lanka and of other persecutions, war, and injustices and suffering in the world today, how can we continue to hope in the face of evil?  We return, morning after morning, day after day, to the empty tomb and seek him out, the Risen Christ who heals the ills and divisions of the world.  Christ, the Son of God, who died and is resurrected, is our only hope.  Death and suffering only make sense when seen through the lens of sharing in His suffering and death and uniting our suffering with his.  As St. Paul expresses: “Now I rejoice in my sufferings for your sake, and in my flesh I am filling up what is lacking in the afflictions of Christ on behalf of his body, which is the church.” (Col 1:24)

Faithful Until the End

Just as Mary Magdalene announced “I have seen the Lord” with her lips, she had announced it with her life and her actions since her conversion until then.  She followed Jesus closely after, according to Luke’s gospel, seven demons had been cast out of her by Jesus.  She had obviously lived a sinful life before, but her contact with Jesus had changed and converted her, and she had become one of his closest followers.  She possessed the humility to repent and be converted and to begin to live a life of obedience and virtue in accordance with the teachings of Jesus.  Not only did she change her life, but she surrendered it to serve him as a follower.  She was faithful until the last, as the gospels tell us she was one of the few remaining there with Jesus at his darkest hour, his Crucifixion:  “Standing by the cross of Jesus were his mother and his mother’s sister, Mary the wife of Clopas, and Mary of Magdala.” (Jn 19:25)  Mary Magdalene is an example to us of the repentant disciple, of rising after the fall and believing in his mercy, of perseverance, of repentance, love, and conversion.  Can we follow him to the Cross as she did and remain with him there, standing below it, suffering with him?  Will we also “rise early” like she did during this Easter season and search for him daily in his risen glory?

April 20, 2019
The Resurrection of Christ: See, I am Doing Something New!
Next Post

April 25, 2019 Unplanned and the Mercy of God
Browse Our Archives
get the latest from
Catholic
Sign up for our newsletter
POPULAR AT PATHEOS Catholic
1

If Any Drug Tested on HEK-293...
Through Catholic Lenses
Related posts from The Way of the Wildflowers

Catholic
How To Pray When We Don't Feel Like...
The Way of the Wildflowers

Catholic
The Mystical Union of St. Pio of Pietrelcina
The Way of the Wildflowers
TRENDING AT PATHEOS Catholic