This is the second post in an interfaith series on remembrance of ancestors. I’ve partnered with Yvonne Aburrow, a Wiccan who writes for Sermons from the Mound, to explore remembrance traditions in each of our faiths.

This is the first line in the first story of the typed and mimeographed copy of magical stories my grandfather made up for me and my sister. My grandparents had small bungalow in upstate New York. They also had an apartment in Brooklyn, but for some reason, I associate his stories with visits to their country house. Anyhow, those were times of simple pleasures of swing sets, community pools, coloring books and crayons. My grandfather, though, a master entertainer and supremely devoted to his granddaughters, gave those days infinitely more special meaning by telling us stories he made up on the spot. Certain ones became favorites, which we’d request again and again (“The Octopus and the Doctor” was one of them.) 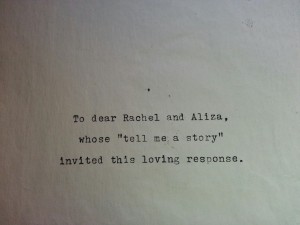 Sometimes he’d let us pick the names of the characters or choose which animals were important in the story. I can guarantee you, though – it was he who came up with Diogenes the Octopus, Calisthenic the Evil Caterpillar, and Balderdash the Unfair and Unsquare Butterfly. (Cindy the dog? Timmy the boy? Yeah, those were us elementary school girls, thank you very much.)

Always, though, there were elements of silliness, magic, fabulous wordplay and often morals woven throughout. Even stories like “The Octopus and the Doctor,” which were honestly nothing but goofy entertainment, contained tiny messages for us. I can guarantee you that his including the notion that exceeding the speed limit (even if it was the “octopus speed limit for the lake”) can get you in trouble was no accident, nor was making Diogenes’ friend, “the smartest of the fish” a girl.

In other stories, the messages were less subtle, like true beauty comes from within and from caring for others (“The Dry Eyed Princess”) and things like cheating and stealing are rotten character traits (“The Unfair, Unsquare Butterfly” and “Cindy’s Bark.”) All contained inspired bits of humor, like when Balderdash challenges the animals in the zoo to a race. He addresses the lion as “cockroach” and insults his grammar, tries to give the giraffe Napoleon complex and makes all kinds of fun of the vain and hard-of-hearing leopard, who instead of hearing the butterfly’s challenge to a race, thinks the butterfly wants to borrow his face. Because the leopard knows his face is so handsome, dontchyaknow.

In the Wiccan tradition, I learned from Yvonne that sharing songs and stories are important and popular activities, though when it comes to formal rituals, “we are more likely to re-enact a myth as a sacred drama.” She also explained that there are three grades of Druidry*: Bards, Ovates and Druids. “Bards focus on poetry, storytelling, and music; Ovates on healing and mysteries; and Druids on the mysteries of Nature.”

In Judaism, of course, storytelling is also prominent – the most well-known practiced by the widest variety of Jews being the Passover Seder. I learned from a JWeekly.com article that there is such a thing as an official storyteller, called a maggid – “ literally, a “sayer,” a teller of tales, certainly, but also a preacher, a teacher, an inspirational speaker. Not quite a rabbi and more than a court jester, with elements of both.” It’s actually possible now to be ordained as a maggid, fulfilling the duty of passing stories of our culture on from generation to generation.

Jews are so fascinated by stories, they even have stories about other Bible stories.  These are called “midrashim.” A midrash takes a story from the Old Testament, and gives us their creative backstories.  Rabbi Marc Gellman wrote a fantastic collection of modern midrashim for kids, called Does God Have a Big Toe?

The first story in his collection is about God’s creation of the universe and is called “Partners.” It’s a hilarious perspective wherein the angels ask God, “Why don’t you clean up this mess?” He responds by forming the planets from rocks, oceans and clouds from water, etc. The angels keep asking, “Is it finished, yet?” and God keeps saying, “Nope!” When God creates a man and a woman, he declares he’s tired and asks the man and woman to finish up the world. “Really it’s almost done.” The man and woman are scared, and don’t think they can do it. God promises to be their partner if they keep trying to finish the world. Of course, they ask what a partner is, and God answers,

“A partner is someone you work with on a big thing that neither of you can do alone. If you have a partner, it means that you can never give up, because your partner is depending on you.”

They agree, and the angels ask God if NOW the world is finished.  God answers, “I don’t know. Go ask my partners.”

The reasons I love this adaptation, if not readily apparent, are the subject of another blog post entirely. Suffice it to say, Rabbi Gellman’s midrashim are big on empowerment and responsibility, respect, humor, love and acceptance.

My grandfather’s stories, though there was nothing remotely religious about them, were big on the same things. This is why they resonated with me, my sister and my cousins – his eager and most beloved audience. Many years later, I was a counselor at a Fresh Air Fund camp for inner city boys in upstate New York. I read my grandfather’s stories to my sweet 10-year-old campers, who loved them and couldn’t get enough. This basically bestowed celebrity status on my grandfather, evidenced by them swarming his car when my grandparents came to visit me. “Are you Grandpa?” “Did YOU write those stories?” “I love the butterfly one!” “Those stories are AWESOME!” “Tell us a story!”

Even more years later, I read them to my then-young daughter, and more recently (last night, as a matter of fact) to my youngest, who is 10 years old. He was belly laughing out loud last night before I even got through the first paragraph – mostly at the absurdity of there being a speed limit for octopuses in a lake. I could practically see my grandfather’s eyes smiling and shining this morning, as Leo said SEVERAL times, “I cannot WAIT to hear more of those stories later!”

“The Octopus and the Doctor”
From the collection, Tales From A Grandpa’s Gladly Woulds,
Written by Emanuel Lirtzman
(Copyright 1977) 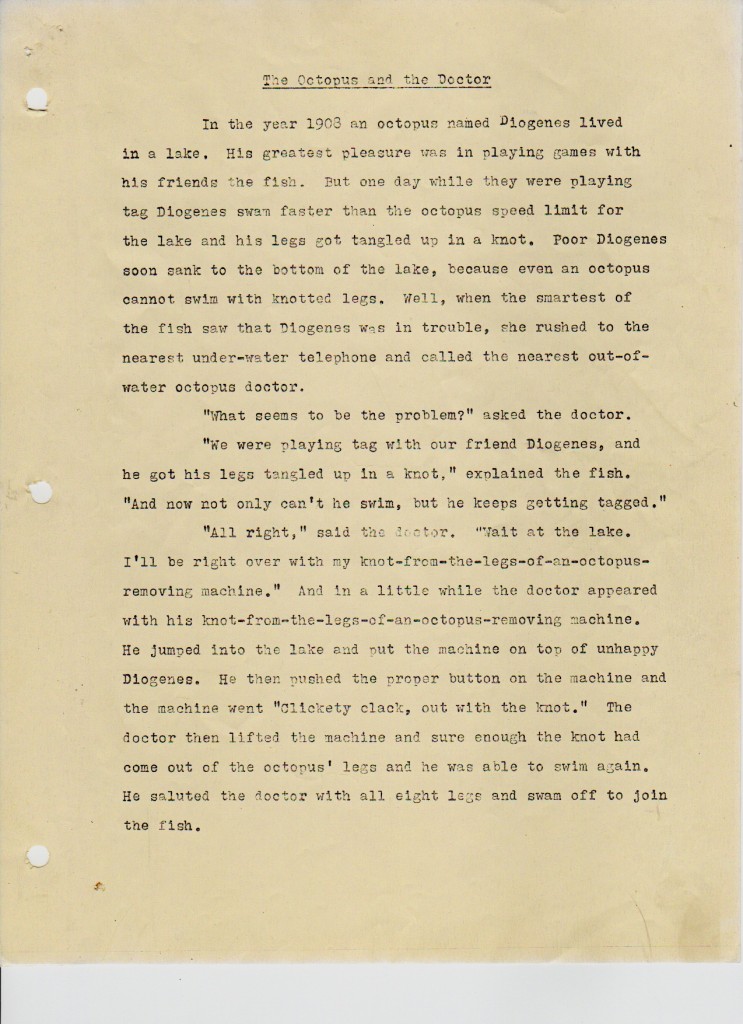 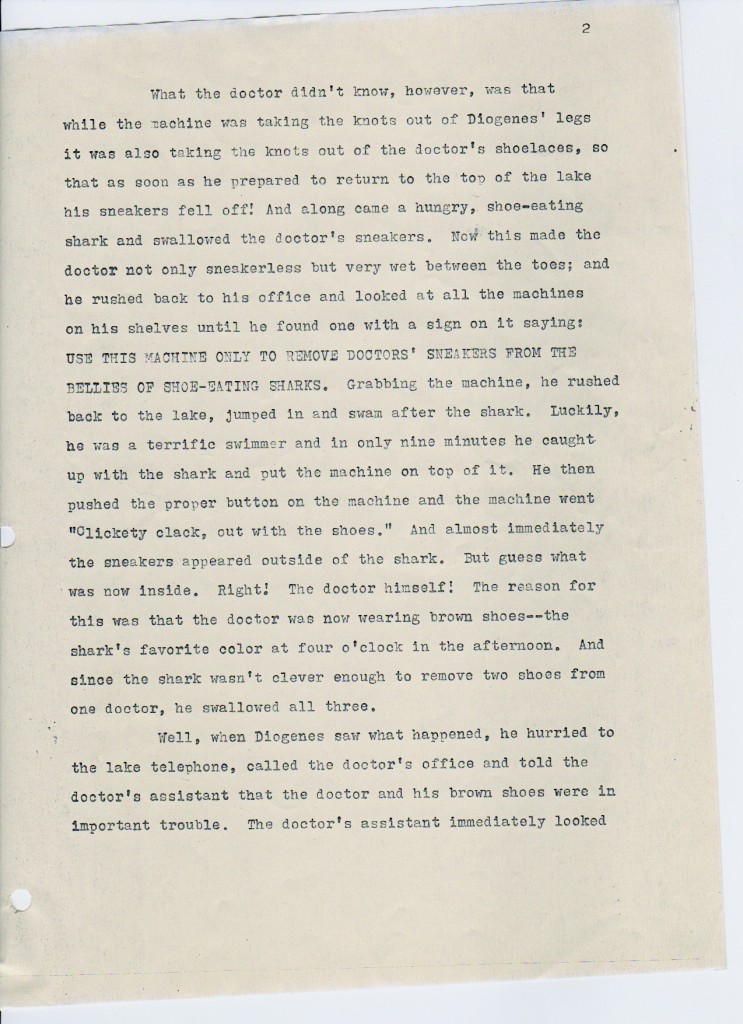 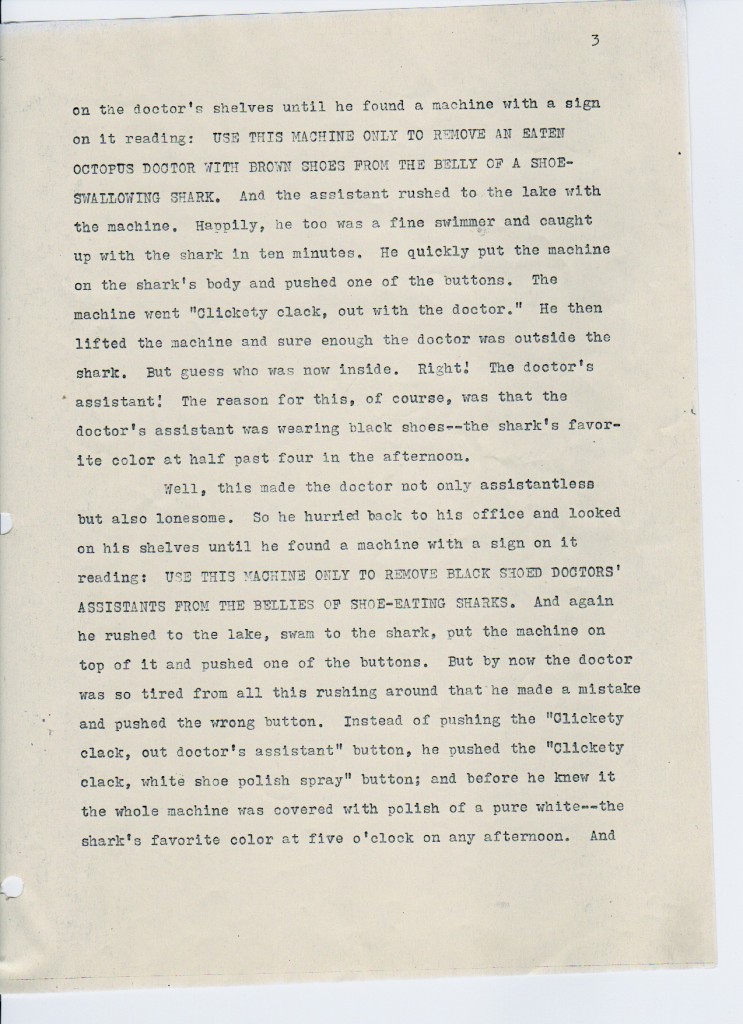 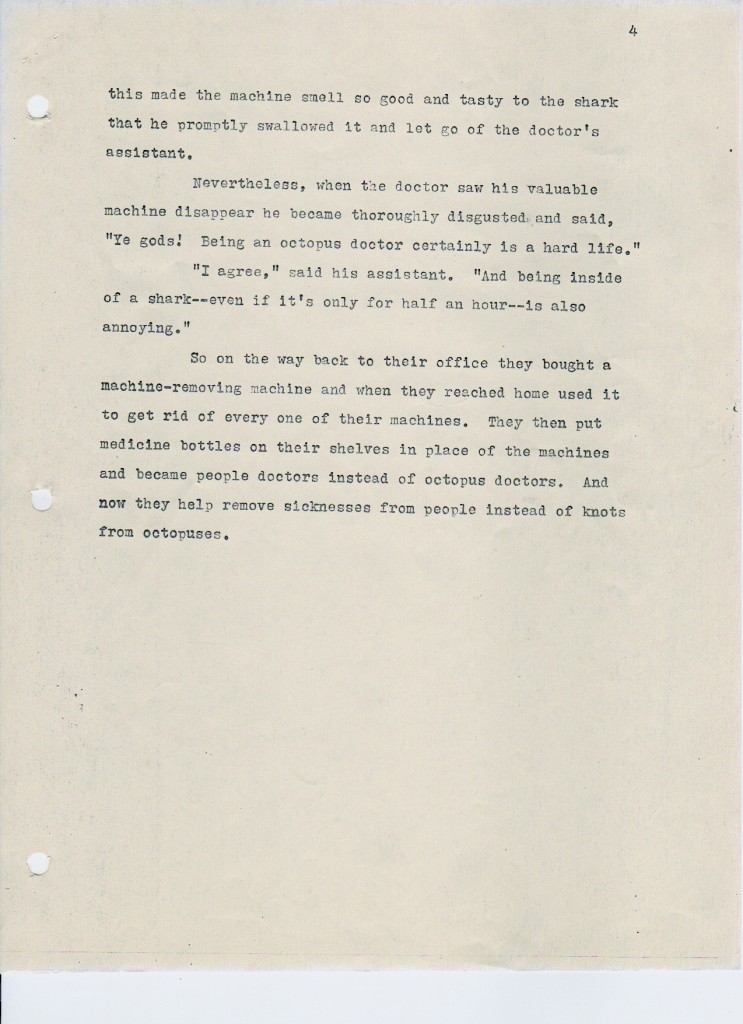 October 23, 2014 The Favor
Recent Comments
0 | Leave a Comment
"No thanks, bible beaters. Keep it to yourselves."
The Darling Kinkshamer Sweet Baby Jesus Frog
"Meh. I don't have a problem with them. I DO tend to go to one ..."
Sami Sweet Baby Jesus Frog
"OK, put on your adult cloths... come on, pull up those pants and realize it's ..."
johnokeefe Nationwide Needs to Apologize
"It strikes me as part of the larger -- and growing -- tendency for the ..."
kesmarn Nationwide Needs to Apologize
Browse Our Archives
get the latest from
Best of Patheos
Sign up for our newsletter
POPULAR AT PATHEOS Jewish
1 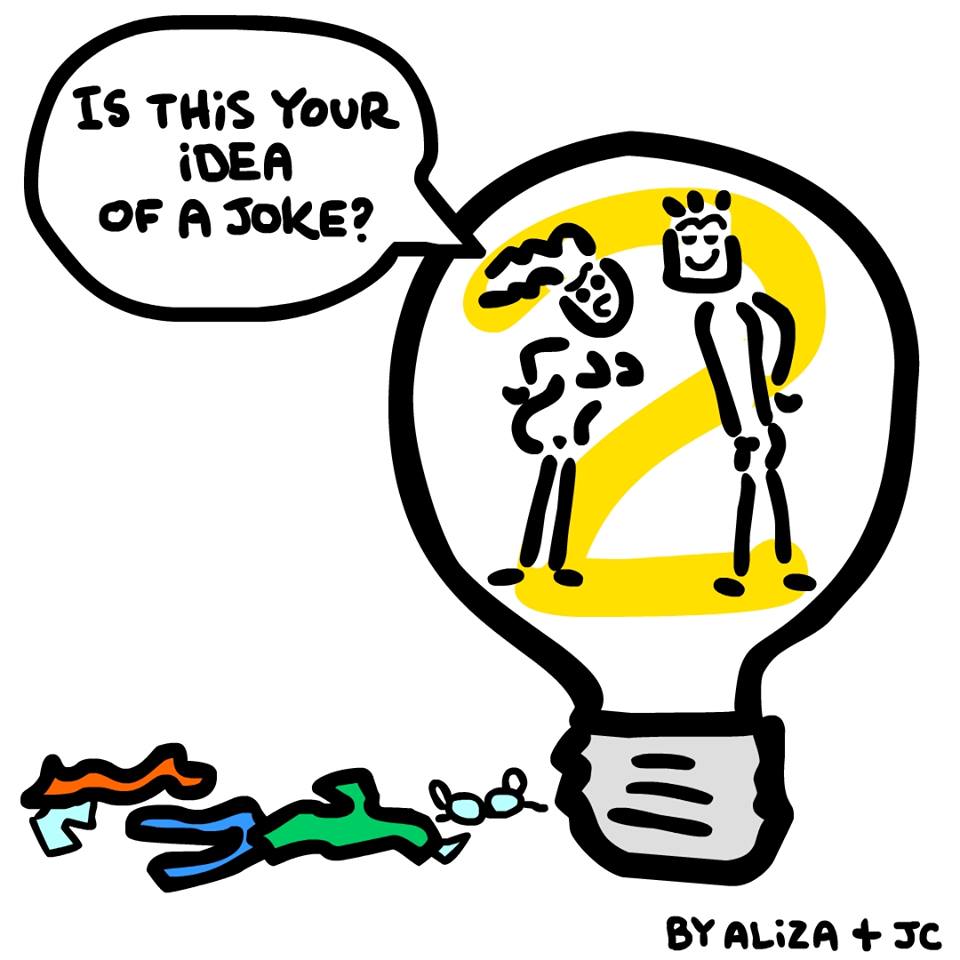 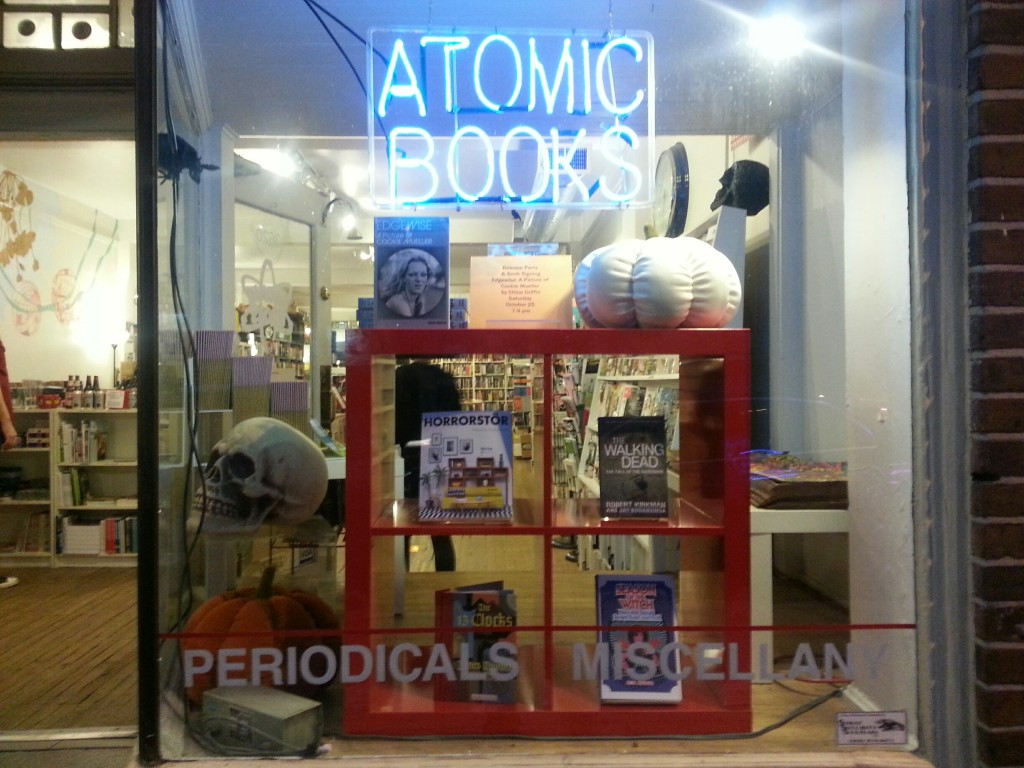