Magic And Change At The End Of Time

Remember how the world did not end five years ago today? The run-up to the 2012 Winter Solstice saw some sillyness, but it was also a good opportunity to pause and reflect. Here’s a talk I gave five years ago at “Eschaton / Towards 2013”, a gathering in Baltimore. These are my notes, or you can watch and listen on YouTube. (If you watch you’ll get to see the first and so far only time I’ve done an illusion-magic trick in public, though you can’t really see it well…)

Happy Yule. Go do some magic.

Friends, I’d like to talk to you for a few minutes about magic and change.

Now we’ve got this big 2012 thing coming up next week, and people all have their own opinions about precisely what December 21 2012 means or doesn’t mean, about what’s going to happen. Some folks think that some metaphysical cosmological shift is going to occur; some of us think that it’s just a handy opportunity to stop and think about the world we’re creating and the one we want to create — a sort of New Year’s Resolution on a grand scale.

And we can argue the details of that over a beer sometime. But what’s at the core of all those ideas is change. The idea of the Eschaton is essentially a shift — a change — into a new reality.

So what does magic have to do with this? Well, according to Aleister Crowley — who was kind of a maladjusted asshole but knew a thing or two about the topic of magic — “Magick is the Science and Art of causing Change to occur in conformity with Will.” Magic is about making *change* happen in accordance with our *will*. And therefore, says crazy old Uncle Aleister, every intentional act is a magical act.

Change is going to happen. That’s pretty much an inevitable part of existence. But if we are intentionally making change happen, then we are magicians! A magician clearly sets their intention about what sort of change they want to happen — they know their “True Will”, as Crowley would put it. And they will raise power — which means getting your mind out of old ways of thinking, getting open to new ideas — and direct that power to effect change in accordance with that intent.

Now, maybe this is getting a little abstract. So to help make it concrete I brought a visual aid. Here we have [reach into pocket, pull out a dollar bill] a dollar bill. The ultimate symbol of the dominant paradigm, am I right?

But let’s take a closer look at this symbol of the dominant paradigm for a minute, because there’s something really interesting going on here.

On the front here we have good ol’ George Washington, the father of our country, yada yada yada. Now, I’m not one of those folks who worship the Founding Fathers; Washington was an aristocrat who owned slaves, after all. And some non-violence advocates say that the Revolution could have been accomplished with non-violent resistance, the way India’s independence was. Maybe, maybe not, that’s something else we can argue over a beer sometime.

But, there’s one really important and very positive thing about ol’ George here. After the Revolution, people were all set to make him a king; and he turned them down. He said he didn’t fight King George in order to become King George.

Now this is important because having kings around was the dominant paradigm for pretty much all of human history, going go all the way back to Gilgamesh and those guys in ancient Mesopotamia, and before that even, the dawn of civilization and even proto-civilizations. A couple of exceptions here and there, like ancient Athens for a while, but mostly anywhere you had a settled, civilized culture, you had some guy claiming to rule it by some sort of divine right.

I could go into a whole thing here about civilization and hierarchy and religion and priests and the Neolithic revolution versus shamans and more egalitarianism in gatherer-hunter cultures…but I did tell Robin I’d keep this short. I’ll just mention that I talk about this stuff in a book I’ve got coming out soon!What’s important is that we had this dominant paradigm about politics and religion and culture for thousands of years, that really wasn’t that different from the ancient Sumerians on up through the Middle Ages.

Now that change that started a few hundred years ago, that’s something as big as the dawn of civilization itself, as big as the Neolithic Revolution and the invention of cities and farming. It’s still going on, this change, and I expect it will still be a couple of hundred years until it all plays out.

And since we are in this time of change, and magic is all about change, it behooves us to get a little familiar with magic.

And to think about how we can use magic to change the dominant paradigm now.

Because maybe this [hold up the dollar bill] maybe seems like something invulnerable. But if we apply a little pressure in the right place [start folding dollar bill], it will fold. It’s like that Chinese cliche about a “paper tiger”, right? [place folded bill between both hands]

Now, if we have a clear intent, if we know that we want to change that dominant paradigm into, for example, something that takes power away from the bankers… and if we can raise and focus our energy, if we can we willing to think about things in a new and different way…we might see [start to unfold dollar bill, showing it transformed into a B Note] we might see a real transformation.

So I’d like to take just a minute or two here to encourage and invite you to practice these magical skills, to think about intent and change and shaking our minds out of old patterns.

And also, one more important ingredient, often overlooked: what the folks in the Church of the Subgenius call King “Bob” Solomon’s first key to magic: Get Off Your Ass! Setting intent isn’t enough to cause change: you have to get up and do something! You have to get specific about taking action!

So with all that in mind, I’d ask you and invite you to do a little meditation, a little visualization ritual, here with me, and practice these skills.

* I invite you just stand comfortably for a minute, shake any tension out of your body. And close your eyes to take a deep breath, together. We’re going to literally conspire here, breathe together. And let it out. And again, in, out. And one more time, for that which we do three times is true. Deep breath in…and be aware, that right now molecules of air that were in the lungs of the person next to you a moment ago, are now in yours. Did you ever think about it that way before? We’re all in this together. And breathe out.

* Now, I ask you and I invite you to consider, as we moving into a time when change is highlighted, what sort of change you want to see in the world around you. Or in the world inside of you. Change one, you change the other, focusing on either is ok. But you have to get specific. “I want world peace.” “I want Universal Enlightenment.” Well, that’s kind of nebulous. Try to bring it down to something concrete. Visualize it, think about what the change you want would look like.

* And I invite you and I ask you to think about one specific action you can take to make that change happen. And I invite you to decide, here and now tonight, to do that thing. Set your intention to act.

* Feel the ground. Put down roots.

* Connect to the sky. See that star above you. (Move a little if you have to.)

* Know that you are a part of this universe, support by the earth, made of starstuff.

* And now I invite you, I suggest to you, to take the feeling, and find a signifier for it. Hold that signifier. Bring it into your heart.

* And now I invite you to become aware of this world around you again. 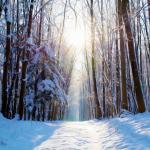 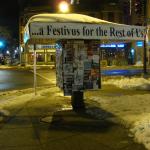 December 23, 2017 Happy Festivus! (On Satire And Parody Religion)
Recent Comments
0 | Leave a Comment
"Well, since I was a part of that ritual, I guess I'm part of Jason's ..."
Tom Swiss Papa Legba And The Internet
"Thanks for this. PC nazis also troll for things that they think are gender faux ..."
Macha NightMare Someone’s Prom Dress Is Not Your ..."
"A little online searching revealed (for me) that, in the realm of Prom dresses, Asian-style, ..."
Pitch313 Someone’s Prom Dress Is Not Your ..."
"Jason LARPs, mentioning his Ostara ritual, lost you a share. I cannot endorse someone who ..."
PMS Papa Legba And The Internet
Browse Our Archives
Follow Us!