“personal growth is one half perspective, and one half harsh truths. And that the most important thing to remember isn’t the person you are, or even the person you’re striving to be, but the journey that exists between the two.

Leadership is a journey between being and striving.

So is practicing a craft. So is long term love. Or working as a healer. Or a parent. Or any number of things. This journey, once we pass a certain age, is also the journey toward adulthood.

So it is with leadership.

I’ve been lately musing on some of the qualities a good leader needs:

When I look at that list, all I can think is, “These are the qualities of adulthood. The things that we are supposed to learn, somehow, by the examples of those around us.”

We have to allow ourselves, continuously, to re-enter the state of becoming, with open eyes and open arms, with courage, and as much grace as we can muster.

It isn’t easy. Why? Many of us didn’t have good consistent teaching in this process of becoming. Some of us had actively bad teaching.

Bad behavior is both scorned and rewarded by the overculture. It becomes our entertainment. It can also breed a sense of entitlement that tells us, “I can do this too.”

Bolstering myself can become more important than bolstering community good…

Sometimes I say that my primary work as a teacher is to help those who work with me to become better adults. A martial arts instructor I know often comments that what he really wants to teach is adulthood. I think he does. It just takes a long time.

Why? Because of the process of becoming. We learn a little bit today, and the rest slides by, until an event happens, or we learn enough other things, and then all of a sudden, that thing we saw or heard four years ago makes sense. And those of us who are teachers or leaders or parents are involved in that same process. Continuously.

There are no “born leaders.” There are only beings, born.

Leadership grows from becoming. And it keeps growing.

Anything less is just someone at the head of the line, shouting nothing much, to anyone who will listen.

We deserve adulthood from one another. We deserve the support needed to help us grow.

Pagan
Challengers in Community are Necessary
Numinous and Concrete 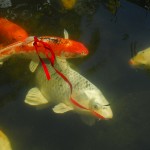