Confronting Empire Takes Us All

Everyone refused to place their hand in Fenrir’s mouth until Týr put out his right hand and placed it into the wolf’s jaws. When Fenrir kicked, Gleipnir caught tightly, and the more Fenrir struggled, the stronger the band grew. At this, everyone laughed, except Týr, who there lost his right hand.

Stories shared by the collective are important.

We need stories. But we don’t need stories for everything. Sometimes all we need are concepts, feelings, experiences, and knowing. Stories can give all of these context, but they can’t replace our lived experience. Too much reliance on story and too little on experience leads to an unbalanced life. And it can lead to too much political ideology or theology that devolves into hairsplitting and infighting. As someone who returned to college in my 30s to study philosophy and religion, I know this to be true.

It is good to think, and to challenge one another’s thinking, even to fight and disagree. But we must do so with honor. It isn’t good to tear one another down by small, offended squabbles. We have work to do, bringing justice to this world.

When I worked full time at the soup kitchen, I did this piece of embroidery. The Works of Mercy: 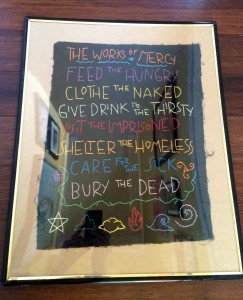 These are works of kindness and are good guidelines for right action. The thing about this list though?  It only points toward justice. Though some of these actions seek to restore justice, they aren’t enough.

The works of justice are the ways we seek to address the reasons why people are hungry or in prison. The works of justice seek to undermine the systems of oppression. And that is where trouble starts: Justice isn’t a platitude. Justice challenges the status of those who are in positions of social and economic power and asks what they have done to deserve the benefits of imbalance and injustice.

Tyr has been knocking on my door since February, appearing in sharp pains in one hand, and deep scratches bisecting the other hand from my arm at my wrist. He has appeared in traveling statues, in dreams, and gifted talismans. He has appeared in runes and on the streets. Tyr, a God I’d not really worked with before, has been insisting that I examine my relationship with justice. This is something I thought I’d been doing for years, but not deeply enough, clearly. There is something I’m being called to that is more risky, more courageous, more in service, than I’ve been called to do before.

I’m being called to the work of binding the wolf. At least I think so. That is the logical conclusion of the stories, right?

The wolf, ever expanding, can also be named Empire.

The thing is, binding the wolf? That is not my way. I want to put in the long term work of offering the wolf a better way. This may take millenia, and something must be done to keep others safer from the wolf in the meantime. I get that. If my attempt is to work to and from Love and Justice, that has to include hope that the wolf can be included, too. But it needs to be retrained. That will take time. And it will take as many of us as possible.

This need for collective action brings me to another thing I noticed about the story of Tyr. In February, I went to a Tyr blot after he had already made himself known via several events. When the Tyr and Fenrir story was being told, one thing struck me: the reason Tyr lost his hand was partially because that’s the result of putting your hand in a wolf’s mouth and partially because he gave a false oath, promising Fenrir safety when it simply wasn’t true. But there was another reason: the other Gods were not interested in justice. They were acting out of fear. They wanted to get one over on the Fenris wolf. They wanted to sneer and mock. They weren’t actually concerned with a new order. They wanted to see their enemy humiliated and bound.

In this interpretation of the story: Tyr lost his hand because, before he could remove his hand from Fenrir’s mouth, the other Gods began to jeer, lording it over Fenrir, and the wolf clamped his jaws down.

Tyr’s sacrifice was made necessary because the others were acting from fear and did not have love and justice in their hearts. 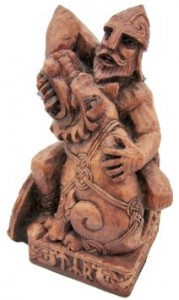 I see this behavior all the time. I’ve participated in it myself. I see it all around me and it sometimes makes me sad, other times angry. Sometimes it makes me want to walk away. I see us acting from states of fear, scarcity or trauma. Be it in spiritual or social justice circles, we fight with one another, and mock those whom we perceive to be our enemies while never understanding that some people have their hands in the mouth of the wolf and need us to chill the fuck out and look past our feelings for a moment while they extricate themselves.

There are people doing their utmost for justice and some of us are squabbling to save face or assuage our offended feelings. Or we are re-triggering one another’s trauma.

I want us to stop.

We need to confront the wolf of Empire. Sacrificing our friends feeds empire further.

Let’s not put our brothers and sisters in further danger. Confronting Empire is dangerous enough as it is. We all face Fenrir. Better to cower or run than to say you are facing Fenrir while jeering at your friends who may be risking so much more. We just don’t know what each of us is risking. We can’t see into one another’s hearts.

The story of Tyr’s sacrifice to me? The story says, yes, Tyr was willing to even sacrifice his honor for the greater good. That’s another thing to look at – whether or not that is ever effective action in the long run. But the part I’m working with right now is this: Tyr lost his hand because of those who were supposed to be his allies. He lost his hand because of the actions of his friends. So who was the wolf in this story?

In facing Empire, I must also face that there is a piece of Empire within me. I have to look within my heart and mind every day to see the ways in which I’ve internalized the system. Fenrir isn’t just an entity or force outside.

My long term goal is to transform Empire – within and without – toward systems of Love and Justice. My long term goal is not to chain Fenrir, but to truly free him – by which I mean, help him to transform and come into balance. This may not happen for another 5000 years, but I’ll keep trying. And Tyr? I will keep listening to the lessons you are trying to awaken within me. I’ll keep trying to learn, and to act better, in service of justice for us all. I know I’ll fail sometimes, but I promise you, I won’t let my own weaknesses stop me.

And you, my beloved friends and challengers? Let’s not rip one another apart. Let’s not give Empire a chance to chew us up and spit us out. Let us stand shoulder to shoulder, working in solidarity. And if we can’t do that? Let’s leave one another to do our work the best we know how.

There’s plenty of work to be done.

This isn’t about any situation or person in particular. I’ve been thinking about these topics for a very long time.

And this is only one interpretation of the Fenris and Tyr story. I’m not a Heathen – nor am I a Norse scholar – though I honor many of those Goddesses and Gods. I’m not claiming any theological authority here. It’s just how the story has been working in me this past year.

Illustrations: Works of Mercy by the author. Tyr and Fenrir by Paul Borda of Dryad Design.