An Open Letter to White America

I am sending out the remembrance of the threads of our connection. We are not isolated beings on this planet. Collectively, in our gorgeous variance, we make up this living organism we call life.

I barely slept last night, the night of the Ferguson Grand Jury decision on Officer Wilson. After marching in the streets of Oakland, I came home, checked in with loved ones, ate something, and tuned in to what was happening in Ferguson. And what continued happening in Oakland until the small hours, and what was happening in 160 other cities.

When writing about these topics before, I’ve remarked that my troubled sleeplessness has nothing on Black and brown parents, lovers, and friends.

This morning, a Black woman tweeted that she thought she was okay, until she saw a group of children walking to school and burst into tears. I don’t know what it is like to live inside that sort of fear, anguish, grief, and pain.

But it doesn’t take much for me to imagine it.

When Rodney King was beaten and Los Angeles was on fire, I felt concern, but I felt that concern from a distance. I didn’t have enough context for a deeper state of empathy. It took the shooting of unarmed Oscar Grant to begin to turn me around. It took rushing to a city council meeting to hear Jeralynn Blueford speak right after the killing of her son, Alan. It took marching in the streets of Sacramento and Oakland with multiple families of people killed by police.

Whether the victims of police killings were men, women, straight, gay, cis, or trans, they had one thing in common: most of these beloved family members were Black. Some were brown. Very few were white. All of the families were in pain.

In the past few years, I’ve been forced, for the first time in my white, working class (now more middle class), activist life, to actually confront the reality of life for Black and brown people in the United States. And I still don’t live inside that reality and am not forced to deal with it daily.

I am not a parent, frightened that a child might not make it home from the store. I am not a man who knows that just walking out the door might get me shot. I am not a woman – cis or trans – who knows that asking for help from police might just get me raped or killed.

You may not live within that reality either. It may be hard for you to even imagine it is real. But I’m asking you to make a stronger effort to gaze into that reality.

The extrajudicial killing of Black and brown people by police is not a sometime thing. It is said that every 28 hours a Black person is killed by police or security agencies. Just looking at the news, and at my Twitter feed, this is not so hard to believe. Are all cops bad people? No. Are all cops racist? No. But the system they work within is. This is the system that stops and frisks Black and brown men in large cities every single day. The system that incarcerates and disenfranchises Black men at horrifically high rates. The system that tells Black women their bodies are both loathed and admired, but are not their own to hold and keep.

Some people say “get over slavery” and yet, Black people in the United States are still treated as less than human. They are human beings repeatedly treated as commodities to make money off of and to use.

The rallying cry of “Black Lives Matter” is important because, within these systems, they clearly don’t. Black lives, in the United States, only matter to the systems of capitalism and imperialism as resources to be exploited and cast off.

We have got to turn this around. Black. Lives. Matter.

This is not something over which we can “agree to disagree.” This is a truth.

I can offer multiple reports for every single statement I made a couple of paragraphs back.

Last night, I made a meme from the words of activist Deray McKesson. Deray is amazing to me, and is throwing out teaching as surely as he is breathing through the teargas in Ferguson and Shaw. In the midst of being gassed twice in what had been designated a safe space – a privately owned restaurant – he said this: “Unrest occurs when the system has completely failed its people. I don’t have to condone behavior to understand it.” 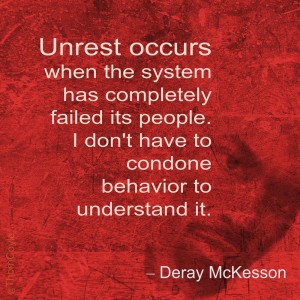 Someone commented that they simply don’t understand people burning their communities down.

To that, I need to comment here: if you cannot understand what it means to fear for your own life or the lives of your children and friends, on a daily basis from your own government, that you pay for, who has authority over you when it should be in place to serve you, a government that treats you and your children and friends as less than human, and calls them “animals” and “demons” or “those people” then I guess I can comprehend why property damage bothers you. But I can’t condone your thinking this. I will go so far as to say that you are wrong.

We have to see the systems. We have to at least try to see the lived experience that is so different from our own.

When the system has not only failed you, but has actively put your well-being and your life, and your families’ lives in danger, how exactly are you supposed to respond? By trusting in that system?

I don’t find random property damage done from grief and anger to be helpful or useful as a political tactic. That said: human life is worth more than human property. Always. In the United States? Particularly in White America? We seem to have reversed their importance, placing property over humanity, at least when those humans have darker skin.

(Aside: I won’t talk about the use of strategic property damage, as used by many, including anti-war Catholic Plowshares activists or French farmers protesting the building of McDonalds in their towns. And I won’t expand here on how rioters at pumpkin festivals, or after World Series games or hockey championships are treated in an “aw shucks” manner by main stream media and police. Looking up any of these should illustrate the difference between protests against state violence and “revelers” smashing windows and setting things on fire.)

I’m not calling out my Facebook commenters. What I’m trying to do is bring us into dialog, with context, and to ask us all once again, to see the systems at play – for even five minutes – from the view of a Black or brown person living in the United States today.

Black and brown people in this country are fighting for their lives.

Legal recourse has not worked. Asking nicely has not worked. Respectability politics has not worked. Waiting quietly has not worked. Being three times better or working twice as hard has not worked. The message is clear: your ancestors were brought here for our use, and we will never let you belong. This message, of course, comes from systems whose foundations were formed on the genocide of the First Nations peoples who are also, despite being the original human inhabitants on this continent, still oppressed and treated as if they do not belong.

White America has a problem, and that problem is ourselves.

Our myopia, our lack of empathy, our inability to see the ways in which we live in arrogance, is literally killing people in the streets.

I’m speaking here of fear of violence from people who carry the badges of social authority and who back that up with guns, Tasers, clubs, tear gas, and armored vehicles in the midst of a system that believes, at its core, that you are less human than people with lighter skin.

I call upon compassion.

I call upon empathy.

I call upon reason.

I pray we remember this: we are all connected.

I pray that we remember: We are responsible for one another’s well being.

I pray that we act on this knowledge.

Late last night, Deray McKesson tweeted again, after having been tear gassed a second time inside a restaurant that was supposed to be a safe space:

After I wrote this essay, it came to my attention that Morpheus Ravenna wrote an excellent piece on looting and rioting: http://bansheearts.com/2014/11/the-violence-from-below/

And Brennos wrote about his experience in Oakland last night: http://strixian.wordpress.com/2014/11/25/social-justice-and-a-goddess-of-sovereignty-and-battle/

Some suggestions for further clarification of thought:

Read the New Jim Crow by Michelle Alexander, or at least read my six month series on it, starting with this introduction. Or at least watch the video in that introduction. http://www.patheos.com/blogs/thorncoyle/2014/04/toppling-prisons-healing-culture-njc/

Read this piece by Ta-nehisi Coates. Whether you come away for or against reparations doesn’t matter, it is the history that is important: http://www.theatlantic.com/features/archive/2014/05/the-case-for-reparations/361631/

Read Distress of the Privileged by Doug Muder: http://weeklysift.com/2012/09/10/the-distress-of-the-privileged/

When you are around non-white people? Listen more. Talk less.

You may be interested in this article on how race plays into the Michael Brown case: http://www.vox.com/2014/11/25/7283327/michael-brown-racist-stereotypes

Or in the investigative reporting Shaun King has been doing for the past two months:http://www.dailykos.com/blog/Shaun%20King

Pagan
Challengers in Community are Necessary
Numinous and Concrete