This time of year when the acorns and pecans cover sidewalks liberally here in North Texas, I start thinking about how nature, with its powerful urge to reproduce itself, shows us much about the nature of God’s love. There is so much of it that we can trample on it and still have plenty left over to feed wildlife abundantly and see many new trees sprout in the spring.  The nuts fall apparently without discernment–they are not parceled out or rationed, but are available to all comers. Promiscuous, actually.

And, quite a picture of God’s love. The Bible simply abounds with stories about people who really seem unlovable that God just decides to love anyway. Really, it is God’s promiscuous love, a love that seems to show no discernment and gets scattered anywhere, to such a point that it almost seems immoral. I mean, some of those people really, really don’t deserve to be loved.

Well, at least I don’t think they deserve to be loved. Here are a few I can think of quickly off the top of my head.

I’ll start with Cain—he killed his brother and then lied about it. But God just spares him and makes sure that no one else can take retribution on him and sends him on his way. Now, how about Abraham? Twice, this fellow, traveling with the beautiful wife, arrives in a foreign country and is afraid that someone is going to kill him because his wife is so beautiful and the inhabitants will want her for themselves. What does he do? He tells people that she’s his sister, lets her be taken into a different household and be subject to the whims of other men, and is left sitting pretty and safe. What a jerk.

Lot is another great one. This guy is Abe’s nephew, and ends up living in a place that is pretty degraded morally. He has a couple of visitors one night, and the people in the town want to hurt his guests and violate them sexually. Lot offers his unmarried daughters instead to the townsmen so they can violate his daughters instead. He may win the prize for jerkdom.  But he is spared and rescued from the tragedy to come. Really? This guy?

Now, to be fair, there are also some women who really have no business receiving God’s love either. There’s this story about a woman who is considered ritually impure and anything she touches is also considered dirty and impure. She rashly pushes her way through a crowd to touch Jesus’ clothes. Stupid woman—who is she to be so selfish as to want to make Jesus dirty? Why didn’t she just fade into the background like she should have? But Jesus insisted on healing her. Made no sense to anyone around him then.

All this makes me wonder what Jesus would do today with people who have made a total mess of their lives by stupid decisions and immoral behavior and lack of proper respect for the right way to do things. I have this strange sense that God loves them, too. Promiscuous love—that’s what God is about.

And that, in my opinion, is what Christmas is all about. God is so very, very much in love with us that no barriers will get in the way of showing such love. It’s there for all takers. Come and find it. Come and adore him. Come. God’s love: there for the taking. 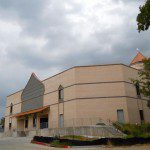 My depression has nothing to do with Jesus.
Since my own depression has been causing me some lack of focus...
view all Progressive Christian blogs
What Are Your Thoughts?leave a comment
Copyright 2008-2021, Patheos. All rights reserved.