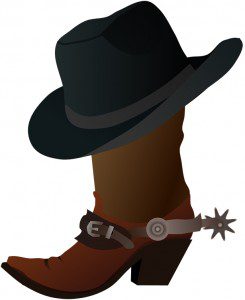 The Cowboy Church has done a spectacular job of contextualizing itself to the community. They are not trying to be all things to all people, but to be something to a selected group.

They started in a barn, with cats underfoot and horses in the stalls. They built a church and it burned. They rebuilt it while meeting in a nearby elementary school.

On the Sunday after Christmas, traditionally a low attendance day, the Denton County Cowboy Church saw a nearly full worship space for the second of the two Sunday morning services.

Cowboy hats, removed only for the two brief prayers, covered many heads. The cement floors, pine paneled walls, white molded chairs and steel beamed ceilings ricocheted with friendly greetings and many conversations in the moments leading up the 10:30 service.

My companions and I had been given a great greeting by the two women at the door. They offered some history of the church and also a tour of the facility.

Boxes of doughnuts lay invitingly open on a table outside the kitchen, and dispensers of coffee and hot chocolate helped warm hands and tummies on this cold morning.

I asked our guide about an order of worship as the bulletin listed only announcements. We learned that there was no formal order–just songs and about 45 minutes of preaching by Pastor Jeff Tackett. No offering, but a whiskey barrel sits in the foyer for any donations.

The six-person worship band took the stage, one female, five male. I think the female sang harmony, but I was unable to hear her voice.The male lead vocalist invited people to come on in and to stand and sing.

We were invited to greet one another and then to “give the Lord a hand” before the congregation was seated for the remainder of the service.

A brief prayer followed, the children left, and the band launched into “I’ll Fly Away” followed by “Leaning on the Everlasting Arms” and a couple more pieces whose titles I didn’t see. The music was catchy and enjoyable.

At 10:55, Pastor Tackett, casually dressed and wearing his cowboy hat, took the stage and immediately thanked the band for their musical talents and then thanked the congregation for their generous Christmas gifts to him and his family.

His forty minute message had a four point outline: He invited the congregation to “Look forward with me, look around with me, look ahead with me and look up with me.” The scripture verses he raced through flashed on the screen behind him, all in the New King James translation.

Beginning with Isaiah 43:2, “When you pass through the waters, I will be with you; And through the rivers, they shall not overflow you. When you walk through the fire, you shall not be burned, Nor shall the flame scorch you,” Pastor Tackett indicated that these words were directly applicable to the members of the Denton County Cowboy church.

He offered a story of his misspent youth, playing hooky from school on the river and then moved to a verse in 1 Chronicles he called “a promise to each of us.”  More commonly known as the Prayer of Jabez, it reads in part, “ Oh, that You would bless me indeed, and enlarge my territory.” Tackett exhorted the congregation to pray to take new territory for the church.

Tackett leaped from verse to verse, hitting Psalms 77, back to Isaiah, then zipped into the story found in Acts of Paul’s conversion to Christianity.  Quoting this time from the older King James Version, he expounded on Acts 26:14, “And when we were all fallen to the earth, I heard a voice speaking unto me, and saying in the Hebrew tongue, ‘Saul, Saul, why persecutest thou me? it is hard for thee to kick against the pricks.’”

Tackett explained “pricks” (more current translations use “goads”) as ways to keep us from fighting against the leading of God. Suddenly we were ushered to Ephesians 3:20-21, whiplashed into Genesis and the story of man’s creation, exhorted to “make the devil worried every time we wake up,” and then landed in Phil 3:13, where I momentarily lost my bearings.

I caught up at the flyover of Joshua 1:3, reminded to go into the land and claim the blessings God has already given us. I floated through the Jeremiah 29:11 words that God has plans to prosper us and that the church will indeed take new territory despite sure activity by their enemy, the devil, to stop it.

A brief sojourn in the blessings of Numbers 6:24-25 led to the story of David and Goliath from 1 Samuel 17. Somewhere in the message, Tackett spoke of his own call to the pastorate and his struggle with such a call. He said he “didn’t have much knowledge about the Bible and still don’t.” He spoke of the courage necessary to move forward and respond to the call under such circumstances and continued to touch on the call to defeat Satan, the great enemy.

As one of my companions, who all thoroughly enjoyed the service, put it afterward, “It’s God and the devil duking it out. Plain old good versus evil. Church boiled down to its most essential elements and a refreshing experience.”

[Note: This column is scheduled to run in the January 2, 2015 print edition of the Denton Record Chronicle.]

The Cowboy Church has done a spectacular job of contextualizing itself to the community. They are not trying to be all things to all people, but to be something to a selected group. Clearly, people are responding to this.  As their website says, “We welcome you to feed the cows, hay the horses, then just as you are drive on over and worship with us.”

Their demographic is the rancher and farmer, people who live close to the land and whose existence is often precarious. A prolonged drought can force the sale of cattle they can’t feed. Rains at the wrong time can ruin harvests. They are in a battle to stay alive and it probably helps a lot to frame their lives in terms of this epic battle where there is no gray.

They do not have the time for theological nuances, for scholarly exploration of arcane doctrines, or fights over whether women belong in church leadership (hint: ain’t no way) or there should be equal rights for gays and lesbians (Are you kidding? Fertility is EVERYTHING!).

Personally, I was appalled at the misuse of Scripture that took place by a clearly well-meaning and much loved pastor. And yet, I also could see how this demographic could easily see those words being written just for them, for their place and their time. The congregation bulged with life, people of all ages there and plenty of children. It was all Anglo, but this is also a predominantly Anglo community and reflects that as much as anything else.

What fascinated me was how much my three companions liked it. All male, one in his 20’s, one in his 50’s, one his 70’s–they found it interesting and energizing and utterly enjoyable.

What particularly bothers me about the Cowboy Church, however, is the lack of transparency concerning its Baptist roots and theology. In this particular case, the initial funding came from First Baptist, Ponder, and what theology they do espouse is undeniably Baptist in origin.

Being Baptist in Texas hardly leaves a black mark on a church name–so why don’t they just come out and say it?  I know this is the new “trendy” thing for churches to do–to leave off denominational affiliation wherever possible.  I think it smacks of deception, hardly firm ground to be building up their kingdoms and claiming their territories.

I am also continually surprised by the lack of time given over to prayer in churches like this. Similar to my experience at First Baptist, Denton, I found the prayer here perfunctory, with no space given for contemplation. There is no sense of formal opening, of preparing to worship a Holy God, of moving behind ourselves into the transforming world of grace. There is no final benediction, no words to send people out as the light of the world.

But . . . as I said earlier, it’s culturally comfortable for their chosen demographic. From the hitching posts outside to the pine paneled walls inside, it looks like a place where those whose lives are close to earth and animal can come in without concern for “Am I doing the right thing?” Despite (or perhaps because of) the lack of biblical exegesis underlying the sermon, the pastor’s stories connected directly with the lives of the people sitting patiently in the uncomfortable chairs.

They leave with the usual assurance of having prayed the “sinner’s prayer” and thus hold a certainty for them that they are among the eternally saved and need to make sure as many of their friends as possible will join them. I suspect the simplicity of the words and the lack of theological nuance (you are either in or out and “being in” is clearly defined) may be the big attracting factors here.

December 29, 2014
Hot Over the Headlines: What Is a Disciple?
Next Post