[Note: this article is slated to run in the March 13, 2015 edition of the Denton Record Chronicle. An analysis of this mystery worship and the LDS environment may be found here.]

It may have been the first Sunday in daylight savings time, but that didn’t keep people from filling the worship space at the LDS (Church of Jesus Christ of Latter Day Saints) on Teasley Drive in Denton.

We attended the 9 AM sacrament meeting, the first of three hour-long meetings for each ward or geographical grouping. The service began with a greeting, announcements, prayer and hymn.

The men all wore suits and white shirts, and the women dresses or skirts. Many women cared for small children in the back of the worship center. From the amount of baby cries and restless toddler noise emanating from that part of the room, it appears no nursery is provided for that service.

During the first hymn, three very young men in dark suits and white shirts busied themselves at a table covered in white. They prepared the sacrament elements, white bread torn into small pieces and small cups of water. When they finished, eight much younger boys, all in white shirts and dress slacks, stood in front of the table. After a blessing prayer offered by one of the young officiants, the boys professionally distributed the elements, first bread and then water. Each boy knew exactly where to stand and how to handle the trays to the people in the pews.

I chose to refrain from participating. There were no written instructions to guide the visitor as to who may or may not receive. I did not want to violate any invisible rules here. In addition no allowance had been made for the gluten-free, an ongoing issue for me.

Testimonies followed. The first by a young man who freely admitted he had only prepared his message that morning. He covered the topic of “agency” which I believe means “freedom to make choices.”

We then heard a female speaker, perhaps 20 years old and just back from her 18 month mission to far North Washington state. Her testimony reveled in the awesomeness of her mission. She shared her success in counseling a married man and getting him into the church and more fully loving his wife. She also mentioned the five-times married, 20 year incarcerated, tattooed, heavy drinking man with whom she apparently spent much time, also leaving him into the Mormon church and baptism.

Even with her success in ministry, she will always be called “sister.” Earlier in the service we had been introduced to a young boy, just turning 12, who was to be ordained deacon that day. Assuming he achieves the Melchizidek order of the Mormon priesthood at age 18, he will then be called Elder and will have the authority to perform most priesthood functions in the church. The sisters will never have such authority. One woman who was pushing for such a move within the LDS church has recently been excommunicated–permanently expelled from the community she has loved and served her entire life.

A third testimony by an older man, father of four, followed. The final hymn, “Count Your Blessings,” was familiar to anyone who spent time in the Baptist tradition.

A prayer and then dismissal and this first meeting was over about an hour and 15 minutes after it began. Most stayed for the following two hours of study and meeting.

We had the privilege of talking with the Bishop of this ward afterwards. He generously offered time and explanation of the organizational genius that underlies the LDS church. There are no paid staff or clergy. All positions necessary for the running of the church and mission are assigned. Because of the rotating assignments, pretty well everyone is in a constant learning mode, keeping people on their toes and highly connected with one another.

The worship service, noisy, lackluster and unprofessional, also shows the kind of community that makes connection happen. People have places, men to the priesthood, women to service in the relief societies. Early marriage and a lot of children are the norm. There will always be church school teachers, youth leaders, mission projects to keep them involved and learning. Because of the power of the two-year mission, starting at age 18 for young men and 19 for young women, the youth bond tightly with each other and with the church that prepares and sends them.

The goal is certainty in their faith. Each testimony must end with a statement about belief in Jesus and in the Prophet Joseph Smith. Probably few know of the checkered moral life of Smith, the author of the sacred Book of Mormon, and those who do know don’t care. They have made such a profound commitment to each other and to their faith by the time they are young adults that this is their church and where they want their children to be. They do belongingness and community extraordinarily well.

March 11, 2015
We have a bunch of children leading this country
Next Post 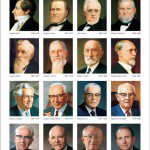 March 12, 2015 After an LDS Visit, I Wonder if Female Clergy are the Problem
Recent Comments
0 | Leave a Comment
Browse Our Archives
get the latest updates from
The Thoughtful Pastor
and the Patheos
Progressive Christian
Channel
POPULAR AT PATHEOS Progressive Christian
1