The truth about the future of the United Methodist Church

The truth about the future of the United Methodist Church? There is no future. It is as simple as that.

There is no future.

I have been putting off writing this post for six months now, but it is time. I attended the 2016 General Conference as part of the United Methodist Reporter journalistic team. I watched, I listened, I conversed with others, I asked questions, I wrote both news stories about the events and my own internal responses to them as opinion pieces.

I saw the UMC nearly disintegrate during the second week of GC. Had the Bishops not stepped up when they did and offered to take all questions about human sexuality off the table to be addressed by a special commission, the UMC very likely would have dissolved then as the delegates were quickly approaching stalemate. Their action at least delayed the inevitable.

Here’s what I walked away with:

It’s not going to hold together. This is shipwreck in action.

I came into the UMC after years and years in hard-right Evangelicalism. In the late 80’s and early 90’s, I witnessed at close hand the hard-right takeover of the Southern Baptist Church. This movement parallels it nearly precisely.

The hard-right of the UMC is determined to cleanse the UMC of heresy. Currently, heresy being focused on the possibility of grace and openness toward those born who do not fit the rigid “a man is a man and can only have romantic expression toward a woman and a woman is a woman and can only have romantic expression with a man” sexual binary. I genuinely have no idea what they do with the Jonathan and David stories in the Bible, but that is beside the point.

The line has been drawn for this battle. There will be more battles to come, with the next one more than likely forbidding ordination credentials to those who experienced divorce. But that’s a later battle with its own death and destruction component. The current one must first be played out fully first and there is only one possible outcome.

The UMC will have to dissolve.

The powerful history of this great denomination will soon be only a footnote in some dusty history book, never to be taken off a library shelf again. (yeah, I just dated myself there!).

Now, I think it is totally wrong for the US church to dictate to the African church that they must embrace alternate sexualities. Culturally, it just won’t fly, and the gospel will get lost for them with such a mandate.

But this also goes the other way: it is totally wrong for the African church to dictate to the large percentage of moderate/progressive UMC churches how to deal with these complex sexual issues in our culture. In the US, Christianity in general is seen as repressive, nasty, and hateful. Our current Discipline-mandated-or-get-out attitudes toward the LGBTQI community reinforces those observations.

The gospel is rapidly getting lost in the US.

The train wreck accompanying the dissolution is going to be horrifying. Structurally, there is nearly no way to split the church or to separate the US/Progressive/Moderate churches from the Good News/my-way-or-the-highway-African churches. The complex interweavings of ownership of buildings, debt, pensions, election and appointments of Bishops and all the clergy who serve under them . . . this is kind of like trying to dismantle the Affordable Care Act: take out one piece and the entire edifice crumbles.

I’ve said it before and will say it again: we’re going to have to blow it up. We’ll have to fire everyone (without a larger connectional system, there is no way to keep any agencies afloat), sell all the buildings (good luck with that one–better to gift them to local congregations but many will either split internally over the crisis or just slowly bleed to death from too many wounds), and do-God-knows-what with the billions invested in pension funds for clergy (both those already retired and the many who are near retirement and scarily dependent on those pensions to keep them afloat after a lifetime of sacrificial service).

As for the missions and ministries . . . as for the faithful laity who have invested their lives into their local ministries and trusted their souls to the teachings of the UMC . . . ? They will be part of the collateral damage done by the heresy hunters. It always happens.

Many have asked, “What would John Wesley do?” I’m no Wesley expert, but I’ve certainly read his work and about his life extensively. He was an obsessive-compulsive man with problematic relationships with women and dictatorial attitudes toward his clergy and lay preachers.

Wesley was also an organizational genius and who, ultimately above all, was driven by the desire to be a real Christian. Because of his primary motivation, I think he would have long walked away from our bloated bureaucracy “Christian” complacency and destructive in-fighting and started preaching in today’s equivalents of the streets again–more than likely with a strong online presence.

He would have continued to make the world his parish and fight hard against the kind of rules that keep the gospel from the people.

I love the UMC. I came in intentionally and with gratefulness and joy along with a strong sense of privilege that I was able to serve this church. I love the life here, the passion for being those who do feed the hungry and clothe the naked, who care for the sick and visit the prisoner. I respect and want the kind of connection where we’re not out on our own but can lean on one another; where we can be better in covenant community holding one another accountable than we can be as solo operators, accountable to no one.

I appreciate the messiness of the UMC, the challenges, the willingness to think, to explore, to acknowledge that we just don’t have all the answers but we can act on the ones we have.

I found my soul in our Catholic roots, our Book of Worship, our hymnals, the way we sing together.

But the Book of Discipline has become the Book of Punishment. Instead of laying out general ground rules on our connectional life that we exercise with the freedom to modify where context demands, it has become a prison of labyrinth mazes and contradictory rules and principles, shutting down life.

Yeah, the working out of all that love is complex and itself contradictory and full of potholes and dead ends, BUT it is doable because it demands that we ask with every rule, every principle: am I indeed treating others in the same manner I myself wish to be treated?

All that, though, is now beside the point. Is there hope? Yes, if exceptionally creative minds coupled with an organizational genius that fits our current context can emerge with a restructuring plan that sets the UMC free again. Unfortunately, I suspect the very nature of our current organization and the embedded restrictions against substantive change make this hope unrealistic.

God is still with us. But the UMC ship, I fear, has now spring too many leaks, mostly caused by those on board shooting one another, not caring that the whole ship will soon crack up and sink. 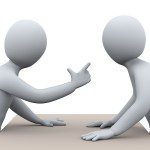 November 30, 2016
Ask the Thoughtful Pastor: What would Jesus do with Trump voters?
Next Post 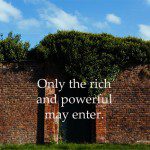