Barbarians to Bureaucrats: Why the UMC Needs its Donald Trump

Trump–and his avid disciples–are barbarians. They are not politicians. They don’t understand or honor the slow process of making policies. The “way we’ve always done things” cry is irrelevant to them. They are here to destroy and to rebuild the US in their image out of the ashes. And that is precisely why the UMC needs its Donald Trump.

Background: I am married to a business owner who has given me a front-seat education on the effect that the policies of the socialist-leaning Obama have had on the business environment. And it’s not good.

Layers of executive-order based regulations have circled business forces with a nearly impenetrable hedge of impossible standards and contradictory regulations. They have stifled creativity and contributed to the continued wage stagnation that has bedeviled our economy for so long. For this reason, he voted for and continues to support Donald Trump.

Personally, I think Donald Trump is a despicable human being, a white supremacist and a sick abuser of women at his core. I find terror at the idea that this scared, tantrum-throwing child-man has the power to start a nuclear war and that we as a nation have declined precipitously in the world’s opinion of us. I find it appalling that he rapaciously pushed for and signed a tax bill that primarily benefits him and his family. I miss the calm erudition of the balanced and intellectual Barrack Obama.

But I understand how and why my husband (who pays zilch attention to the things that are making Fire and Fury: Inside the Trump White House a runaway bestseller) continues to support the current President. (Note: I purchased and started to read the book mentioned above. It is poorly written, even more poorly edited and, as far as I can tell, offers nothing new that has not already been written elsewhere but here in more tabloid form).

Mr. Trump systematically appointed as the heads of most agencies people who were fundamentally opposed to or ignorant of the work done by such agencies. Slowly but surely, for better or for worse, regulations are being discarded and dismantled.

Imagine if Trump didn’t tweet. The craziness of the past weeks would be out of the way, and we’d see a White House that is briskly pursuing its goals: the shift in our Pakistan policy, the shift in our offshore drilling policy, the fruition of our ISIS policy, the nomination for judgeships and the formation of policies on infrastructure, DACA, North Korea and trade.

As horrifying as this looks–and much, much damage will be done–such deregulation becomes necessary on a periodic basis to keep the US economy healthy. And without a robust economy generating a lot of money, we do not have a functioning nation nor can we do a good job caring for the more vulnerable among us.

Trump–and his avid disciples–are barbarians. They are not politicians. They don’t understand or honor the slow process of making policies. If the US does survive the assault of this particular barbarian, we will end up much stronger and more focused. If we don’t . . . then eventually we’ll be a forgotten footnote in history. One way or another, we will be utterly changed and very possibly, more alive than ever.

Keep in mind that the “way we’ve always done things” cry is irrelevant to barbarians. They are here to destroy and to rebuild out of the ashes. And that is precisely why the UMC needs its Donald Trump.

Years ago, I read a business book by Lawrence M. Miller that I’ve never forgotten: Barbarians to Bureaucrats: Corporate Life Cycle Strategies. Miller, apparently a profoundly spiritual man, pulls liberally from world history to illustrate how corporations, generally starting with much creativity and energy, too often end up choking themselves to death by policy manuals and layers of strangling bureaucracy. At that point, they are ripe for the next barbarian to wipe them out and rebuild from the ashes.

This process, of course, is what has already happened to nearly all mainline denominations. Since I know The United Methodist Church the best, I will speak specifically to them, but what I say is applicable across the board.

This church, the Methodist movement, began by the barbaric, rule-breaking, structure-destroying actions of our very own barbarian, John Wesley. Now, let me note quickly: the difference between Mr. Trump and John Wesley is that Wesley was a man of well-formed character while Trump apparently has minimal or no character foundations. Nonetheless, the two have followed a similar pattern of bursting on the scene and leaving chaos and discombobulation in their respective wakes.

Where the church is concerned, the “barbarians at the gate” come primarily from entrepreneurial, independent pastors in the Evangelical world. They function with little accountability and with the accompanying freedom to quickly pivot as conditions change.

That pattern stands in total opposition to the methodology used by mainline churches when faced with a radically shifting world. We can’t do anything without multiple layers of approval. Often our very structures make it utterly impossible to implement substantive change, even when mandatory for institutional survival.

Truthfully, our beloved barbarian, John Wesley, would look at us and say, “I’m outta here. You are bringing death, not life. You have obliterated the freshness of the Gospel by the rules that breed infighting and self-righteousness.”

Fixing systems or selling and producing?

I know many are working hard and tirelessly to come up with a solution that will breathe fresh life into the church that I love so much, the church that offered to me the aroma of Christ, the openness to the Spirit, the wideness of God’s mercy. Unfortunately, they tackle the impossible task. Note how Miller describes the Bureaucratic organization (Barbarians to Bureaucrats, Ballantine Books, 1989, p. 128):

The Bureaucratic organization is one consumed by love of its own physical form. The process of specialization has evolved now to the point where there are subgroups of subgroups, each performing disjoined studies, evaluations and plans, few of which will have any effect.

The Bureaucrat will constantly reorganize, searching for the structural solution to the spiritual problem. These frequent changes in organization will produce employees who will constantly be wondering if they will have a job once the latest reorganization is finished. In the developing stages, employees looked to the future with high expectations. In the declining organization, employees look to the future with fear, the enemy of creativity.

A downward cycle is set in motion. Concern about the future reduces creativity, reducing new business, which increases fear, further suppressing creativity. The more this cycle progresses, the more the Bureaucrat feels justified in cost cutting, reorganizing and tightening control.

Does that sound familiar to anyone?

I wrote another blog post last year about the fact that the UMC as an institution does not serve her primary customers well. To function with energy and hope, the primary “customers” of the UMC organization are the front-line clergy. Funding for mainline church bureaucracies comes primarily from offerings generated in the local churches. Thus it becomes the role of the clergy to essentially “sell” the product that enables the institution to survive.

Yet too often the institutions itself ensures that clergy see little institutional support, are beat up by their congregations, find themselves ignored, worn out, drained by endless meetings and even more countless reports, inadequately compensated and spiritually incapable of being the channels of spiritual vitality to their congregations.

. . . .your company is growing more by acquisition than by new product creation.

. . . your company has reorganized more than once in the past three years.

. . . employees and managers alike feel that they can do little to alter the company’s fortunes.

. . . managers and employees tend to talk about the “good old day” when things were exciting and fun.

. . . managing or fixing the systems and and structure receives more time and attention than selling and producing.

We need a barbarian with character

Like it or not, we need a Donald Trump–but one with the character and executive ability of a John Wesley. We need someone to come in and shake us up and make us look harder and longer at the real “why’s” behind our lost vitality. We appear to have left behind or legislated away the ability to self-reform. We must distill our essence and then ask, “Does this procedure, this policy, the pattern serve our essence or distract from our essence?” 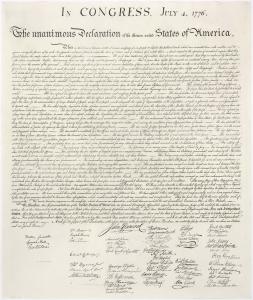 For the US, two vital documents contain our essence: The Declaration of Independence and the US Constitution. I suggest you re-read both of these noble documents. Here is Abraham Lincoln’s distillation of both:

Four score and seven years ago our fathers brought forth, upon this continent, a new nation, conceived in liberty, and dedicated to the proposition that all men are created equal.

Now we are engaged in a great civil war, testing whether that nation, or any nation so conceived, and so dedicated, can long endure. We are met on a great battle field of that war. We come to dedicate a portion of it, as a final resting place for those who died here, that the nation might live. This we may, in all propriety do.

But, in a larger sense, we can not dedicate we can not consecrate we can not hallow, this ground The brave men, living and dead, who struggled here, have hallowed it, far above our poor power to add or detract. The world will little note, nor long remember what we say here; while it can never forget what they did here.

It is rather for us, the living, we here be dedicated to the great task remaining before us that, from these honored dead we take increased devotion to that cause for which they here, gave the last full measure of devotion that we here highly resolve these dead shall not have died in vain; that the nation, shall have a new birth of freedom, and that government of the people, by the people, for the people, shall not perish from the earth.

I continue to ask: what does a disciple look like?

Wesley knew what a disciple looked like. We, however, no longer have a standard definition. Without it, we are doomed.

Our glue becomes pensions and fear of pain rather than passion and love of people. But money and pain always fail. Passion and love? They, and they alone, give us a fighting chance. 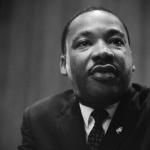