Trump, Stormy, and the Lord’s Anointed: The Thoughtful Pastor Speaks

Or as the good old King James Version puts it, “I will not put forth mine hand against my lord; for he is the LORD’S anointed.” That’s Donald Trump today.

When Obama was President the conservatives in the country railed at anything and everything they saw as a transgression of some, very poorly defined, standard.

There is some suspension of logic.  Why? And why does the conservative side accept the new logic and repeat this illogical logic?

Any light you can shed on this would be appreciated because it appears to me the mental logic switch has been turned off.

Here’s the problem: You are looking at the current situation with eye informed by a kind of tit-for-tat logic (if it was wrong there, why isn’t is wrong here?) rather than through the eyes of those who see the Bible prophesying this exact moment in time.

Many conservative religious people are convinced God planned for and chose Trump to be the President of the US to bless the US and to solidify its allegiance to Israel.

People have seen visions where God has told them exactly that. Suppose we use those visions as a starting point, rather than your biblically uninformed logic–after all, the Bible tells us that the wisdom of the world is just plain foolishness to God (1 Corinthians 3:19). Once we do, we can see clearly that Trump as President–for eight years at least and preferably for life–is exactly what God has in mind for the United States. You might want to view the video below.

Now, let’s get seriously biblical about this–again, we need true wisdom here, not some silly worldly idea that we can apply the same behavioral and moral standards to everyone.

In the Bible, most kings (i.e., “presidents for life”) are pretty rotten and generally uninformed about how to rule. Some want to compare Trump to the adulterous and murderous King David, However, it makes more sense to compare him to Saul, Israel’s first King (for life, of course).

The number one thing to know about King Saul is that he was mad. Mad, as in “insane.” I suggest you read 1 Samuel, especially Chapter 16. The Scriptures unequivocally say that God sent an evil spirit upon him.

As it turns out, the young David and king-in-waiting was a sophisticated musician and could play his instrument in a way that helped to soothe the unstable, unpredictable, evil-spirit haunted king. We might name David the first “king whisperer.”

Saul kept the handsome, talented David close to keep his demons far as possible. Unfortunately, Saul also periodically tries to kill David. Without a Twitter utility, firing him was apparently not a possibility.

Eventually, David flees for his life.

Saul, angry because too many people like David better than they like him–and Saul really needs to be liked–begins to pursue David, murder in mind.

Eventually, they find themselves in a hide and seek desert battle. Suddenly, Saul feels the call of nature and heads to a cave to, ummm . . . “relieve himself.”

As it happens, he picks the very cave where David and his cohorts are currently hiding from the mad and murderous king.

Egged on by his merry men, David creeps up behind Saul, sword drawn, prepared to kill. However, he changes his mind and instead slices off a corner of Saul’s robe. David, justifying his lack of action to his disappointed and frightened supporters announces, “The LORD forbid that I should do such a thing to my master, the LORD’s anointed, or lay my hand on him; for he is the anointed of the LORD.”

Or as the good old King James Version puts it, “I will not put forth mine hand against my lord; for he is the LORD’S anointed.”

In a dramatic announcement in view of the collected masses of soldiers, David then tells Saul about sparing his life. The word spreads like a viral tweet.

Saul now feels bad about trying to kill David and promises to stop. Nonetheless, a couple of chapters in Samuel later, he’s right back at it. He is who he is, after all, the mad king. It’s silly to expect him to change or to grow more mature.

Anyway, from this story rose the idea that once God has anointed someone King (or President?), it is wrong to oppose, to “lift up one’s hand against,” that person. That includes criticizing that person’s moral, or immoral, decisions. Just not the done thing.

Now, since much of the conservative world is utterly convinced that God has chosen and thus anointed Trump as President (for life?), they observe the parallels with the mad King Saul in the Bible and say, “See, God’s in charge. Worry not about the chosen man’s behavior. God makes exceptions for such as one as he.”

Easy-peasy. Logic-smlogic. The lesson: if you are the chosen of God, you can get away with anything.

have a question for the Thoughtful Pastor? Feel free to send her an email or get in touch by Twitter or Facebook. These columns generally appear in the Denton Record-Chronicle as well as here on this blog. 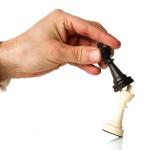 March 13, 2018
NOW is the Moment, UMC: Will You Stop the Evangelical Takeover?
Next Post 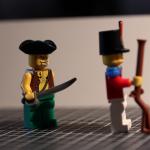 March 23, 2018 It's Not The Blood; It's the Betrayal: Holy Week Reflections
Recent Comments
10 Comments | Leave a Comment
Browse Our Archives
get the latest from
The Thoughtful Pastor
Sign up for our newsletter
POPULAR AT PATHEOS Progressive Christian
1