Monday Afternoon At GC2019: The UMC Has Just Died

The delegates have spoken and the UMC has just died: gays are irredeemably bad, evil and unacceptable. 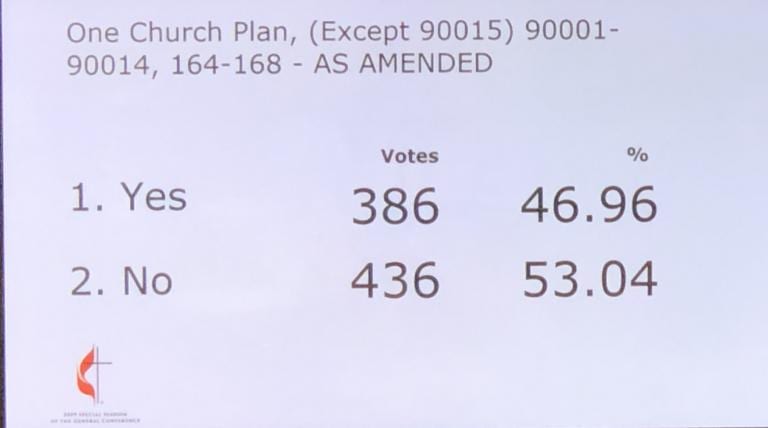 I can barely write about this. The delegates have been debating the inclusive One Church Plan, one three minute speech after another, since about 1:15 pm. Each side makes points that they feel are definitive.

Nowever, as I see tight, tight votes on what are simple corrections and not substantive changes passing by one vote or not passing by a tie, I am aware of how fully we are split.

It is my current understanding that the traditional plan, clearly out of compliance with the church constitution because Maxie Dunnam showed up with 35 pages of amendments for it (ruled out of order because they must be translated first) is being referred to the Judicial Council for consideration. In the meantime, however, it did pass the legislative committee and will be discussed and voted on tomorrow.

Let me digress here just to remind everyone that the 864-person legislative committee (minus the 31 people who were unable to obtain their proper visas) will be the exact same 864 people, minus 31, who will be voting at the plenary session tomorrow.

And numbers are not adding up. 864 minus 31 is 833. Yet, 808 or 807 has been the vote count recently. What are the rest of these people doing anyway? Do they have something better to do than hold the future of the UMC in their hands?

At this time, I, who hate Twitter with every once of my being, have been reduced to checking it frantically every few minutes to see if anyone knows anything new. Worse, I am actually Tweeting myself (should you want to follow those unprofound moments, I’m at @christythomas).

I’ve been predicting this for some time: we are going to implode. In fact, after the 2012 GC, when everything substantial accomplished there was later invalidated by the Judicial Council who were doing nothing less than actually doing their jobs, I said that we’d have to blow it up and start over to ever do anything because our very structure makes substantive movement impossible.

I so wish I could get down on the floor with the delegates. Things are tense up here in the press box, and I wonder how folks down there are doing. Time is terribly short. We adjourn at 6:30 pm today and there are still 19 legislative items to get through. And, of course, just as I was writing about the time pressure, the One Church Plan, meticulously planned and worked out by the Commission on the Way Forward, officially died in committee.

And so The United Methodist Church just died.

Currently, there is a plea on the floor to consider the Simple Plan (a motion has been filed to not deal with any of the rest of the legislation). That’s the easiest and, frankly, the most logical plan of all because all it does it take out discriminatory language from the Book of Discipline. But it will never pass. The delegates have spoken and the UMC is dead: gays are irredeemably bad, evil and unacceptable.

I’m about to throw up.

Oh, one other thing: the conference organizers put all of us in the press in a death trap. We are on the sixth floor of the Dome in St. Louis. There is one working elevator, and they will only let six people in it at the time. I demanded to find out about stairs and when I did, I discovered that, yes, we could access a set of stairs but they end on the third level which is currently locked down and unlit. In other words, if there should be a fire, the press are toast. And I mean that literally.

May God help us all.

Photo credit: screen shot from the live feed at GC2019 by Christy Thomas 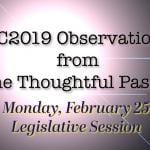