Evangelicalism is Not Declining: A Response to John Dickerson’s NYT Essay 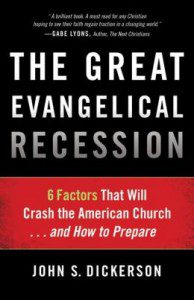 A young evangelical pastor named John Dickerson just released a head turner of an essay in the New York Times, with the Wall Street Journal America’s paper of record. Wielder of a sharp pen and possessor of a passionate heart, Dickerson is senior pastor of Cornerstone Church in Prescott, Arizona. He is a graduate of Bob Jones University and Phoenix Seminary.

Dickerson is soon releasing a book entitled The Great Evangelical Recession: Six Factors That Will Crash the American Church… and How to Prepare (Baker, 2013). In preparation for his book’s launch, Dickerson is making the rounds and selling his thesis. On the website devoted to the book, one can find an ominous video foretelling the fall of evangelicalism. The narration includes lines like this:

Dozens of existing studies prove beyond doubt that the church is declining.

In the next twenty years, we will witness an implosion and disintegration of the American church.

Dickerson clearly is not a wilting flower; his book clearly is not intended to be, either. In his New York Times piece, Dickerson substantiates the claim mentioned above:

First, evangelicals, while still perceived as a majority, have become a shrinking minority in the United States. In the 1980s heyday of the Rev. Jerry Falwell’s Moral Majority, some estimates accounted evangelicals as a third or even close to half of the population, but research by the Notre Dame sociologist Christian Smith recently found that Christians who call themselves evangelicals account for just 7 percent of Americans. (Other research has reported that some 25 percent of Americans belong to evangelical denominations, though they may not, in fact, consider themselves evangelicals.)

One can easily get into a War of the Polls. I’m not super interested in such a contest. However, I did find it interesting that in the December 2012 edition of Christianity Today (entitled “There and Back Again,” which this Tolkien nerd enjoyed), there is research presented that speaks to this very issue. Oddly enough, it offers a strong corrective to Dickerson’s bold contention.

According to CT, major cultural changes are indeed afoot. The “nones,” those who have no religious affiliation, have skyrocketed in recent years; they’re up almost 15% over the last 20 years. But the General Social Survey shows that during the last decade, those claiming affiliation with “evangelical” rose from 23% to about 26%.

Among adults under 30, nearly 24% claim to be evangelical, with that number rising several percentage points since 2007 alone. The percentage of “nones” has also risen among the younger crowd in the last decade, but even here the story is by no means fixed. Over the last few years the percentage of “nones” has actually decreased, not increased, according to the GSS. Furthermore, according to the survey, the percentage of people claiming to be evangelical in 1985 is virtually identical to the percentage claiming the same in 2010 (the last year for which we have data). There has of course been fluctuation in these statistics over the last three decades, but if the GSS is to be believed, then Dickerson’s central contention is on shaky ground at best.

As seen above, Dickerson attempts to anticipate this kind of response by noting that this 25% figure may not actually reflect those who are personally evangelical. But if this is true of one category, it is true of all the categories, and so I’m not sure that his counterpoint holds weight. (Update: I trust the General Social Survey. It’s conducted by the University of Chicago and is widely respected. Ed Stetzer of Lifeway, also a respected pollster and analyst, backed its findings up. The Pew Forum, interestingly, gives basically the same number of evangelicals in the population that the GSS does: 26%. See here: http://religions.pewforum.org/affiliations)

From a statistical lens, then, I’m skeptical at best toward Dickerson’s argument. I would not appoint myself a prophet, in part because I think that the future of Little League baseball teams—let alone a massive movement like evangelicalism–is hard to predict. But if I were to assume this lofty mantle, I would not read this data as suggesting that evangelicalism is gearing up for an “implosion” and a “disintegration.” Seems like more boring trends may be unfolding–like the idea that the movement is “holding firm” and “staying together.” That doesn’t send voice-over chills up one’s spine, I admit. But it does seem faithful to the data proffered by the GSS, at least.

I do think that Dickerson is right that evangelical political capital may have diminished a bit in recent years. It could be that our king-making days are over (though many African-American evangelicals, whose support helped elect and reelect Barack Obama, might justly differ with this point!). Or perhaps there is a different story at hand, one that is difficult to foresee. For example, as Rob Schwarzwalder pointed out recently, in 2011-2012, 131 pro-life measures were enacted and signed into law at the state level, the most victories in the history of the pro-life movement. That’s just one example that doesn’t mesh with Dickerson’s argument.

In addition, perhaps some churches are in decline, as Dickerson says they are. But I wonder if even this is a sign, ironically, of the growing health of evangelicalism and the waning power of nominal Christianity. If this is so, it is not clear to me—as it is for Dickerson—that this means that the movement is in “disarray.” Rather, it could mean that evangelicalism will actually grow stronger as a result of a more coherent identity and unified witness. Perhaps local churches and denominations that really do believe the gospel–that have purer church membership, in other words–will be able to better reach their communities. This is entirely possible, right?

Dickerson presents the classic dichotomy of those who bemoan the unpopularity of Christian views: we can either keep “angling for human power” or start winning souls. Well, I have little interest in power. My evangelical friends share my lack of interest in this pursuit. What we do care about, though, is human flourishing. On this point Dickerson shows well-established naïveté. The mainstream media wants us to read the evangelical promotion of life, marriage, and truth as repressive, unkind, and counter to the spirit of Jesus. If I may be so bold, it is a shame when fellow evangelicals pick up this tune, and especially so when they sing it in the pages of the New York Times.

In the Beatitudes of Matthew 5, Jesus told his disciples and by extension us that we will be hated if we stand up for righteous causes in this world. Jesus saw the risks. He knew the cost. Yet he did not encourage his church to muzzle its witness, but to unleash it in order that a sinful world might not die, but live. Evangelicals do not speak the biblical truth on homosexuality out of hate, but love. Evangelicals do not contend for the rights of the unborn out of a desire for power, but out of a concern for the least of these. Evangelicals do not decry a sexualized culture because we like to wring our hands, but because we want to spring Satan’s deadly trap.

If you call yourself an evangelical, and you’re not aware of these consuming concerns, you clearly don’t know the evangelicals I do. They’re not power-hungry; they’re not angry. They are full of love for God and his image, man, and it is from this love that they speak truth and life to a world lost in sin.

It is true as Dickerson says that whatever befalls the church in coming days, Christ will triumph. But eschatological promises should not blind us to earthly realities. A vibrant gospel witness is the church’s primary mission. But Christians from Justin Martyr to Augustine to Aquinas to Calvin to Edwards to Wilberforce to Colson have seen from the Bible that society benefits immeasurably from the church. And society benefits most when the church is strongest. I have made clear that Dickerson seems flatly wrong that the church is deteriorating. But whether it is or not, his cheer-leading of the loss of evangelical social influence chills my blood. If the church loses ground, who suffers most—the so-called powerbrokers? Most assuredly not. The babies in the womb, the homeless who have no shelters, the poor who have no jobs, the nations that have no missionaries—these are the people who will suffer most if the church falters.

Mainline Christianity is in tragic freefall, and no doubt many of its departed are becoming “Nones” (it would be very odd to be speaking this term–the Catholic Church is seeing a stunning rise in its womanly orders?), but evangelicalism is strong. I think it will continue to be. It may lose some influence; it may take some cultural hits. It is embattled, yes, but I see signs that indicate against all odds that it is thriving in many places. The so-called new Calvinism was the third biggest idea of 2009, for example. Mainstream media coverage in places like The Guardian has shown that this movement is spreading like wildfire in China. The number of American young people claiming to be evangelical is actually increasing according to the GSS, despite what many of us feel when the secularity of our culture parades itself before us.

Everybody take a deep breath. I find the New York Times profitable and stimulating reading. John Dickerson looks to have a bright future ahead. But I think a different, more complex narrative is afoot. We don’t know what’s ahead, but we do know this: the movement is not dead. It is healthy.

Do "Rights" Limit or Empower the...
Cranach
Related posts from Thought Life

Evangelical
On the Revoice Conference, "Gay Christianity," and the...
Thought Life
TRENDING AT PATHEOS Evangelical