Does “Gospel-centrality” Mean Christians Don’t Protest or Get Frustrated? 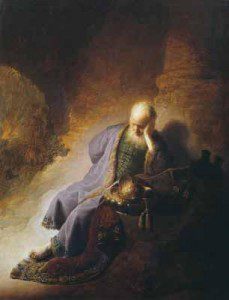 In light of the Louie Giglio fiasco, some evangelicals have argued that Christians need to cheer up and trust God.

It’s always true that we need to trust God. I was encouraged, for example, by the content Jared Wilson posted on this subject (Jared always encourages me with his Christ-driven material). Our Trinitarian God can never be thwarted. He is sovereign and unstoppable. Jesus will return for us. These are the truths that inspire, comfort, and embolden us.

There has been a bit of commentary from some of my brothers that I’ve wondered about, though. I fully agree that God is in charge and that we don’t need to fear man. But some, like my friend Matthew Anderson, have made the Giglio fallout sound as if it’s not really a big deal. Others have indicated it might even be losing sight of God’s goodness and grace to protest a sitting president apparently barring a Christian pastor from praying due to biblical convictions. Such protests, some would say, mean that we’re not gripping the gospel and its glorious promises tightly enough.

Well, that is a good caution. Our hope is not in politics or a place at the political table. I agree in an ultimate sense. Let that be said, and felt.

But I would say this to my friends: being “gospel-centered” does not mean that we don’t grieve and protest against sin and injustice. If that’s what we construe it to mean, I wonder if we’re missing certain parts of Scripture. Yes, knowing God means living joyfully in a grim world. But let’s not forget the hard parts of Scripture, and the difficult times.

After all, if we’re talking about godly people who responded to trial with great sorrow and also conviction, the list would include:

This is quite a list, as one can see. It could go on. There is clearly a major place in Christian faith for responding to trials and persecution with a) grief and anger and b) godly agency that can involve standing up for one’s rights. We tend to think of Acts (the Bible?) in apolitical terms, but we might forget that the entire last fourth of the book has Paul in official political settings, defending himself and his rights even as he fearlessly proclaims the gospel of Christ. There’s something in Acts 21-28 that we must not miss.

Why do I say this? Because Paul clearly did not interpret his capture as righteous, good, or necessitating silence. He appealed not only to his own personal innocence in the matters at hand, but his Roman citizenship. That is instructive for us. Jesus opened not his mouth before his death, but Jesus had a different situation than Paul (and us). He knew that it was best for him to die for the sake of his people; we do not possess the same surety.

The early church practiced this same courage. Justin Martyr appealed to the emperor to stop persecuting Christians, to give just one famous example. Surely, many embraced martyrdom when it came, as should we if it comes (in fact, martyrdom became super-spiritualized, which was problematic). But we err, I think, if we see persecution as light and glancing. It is not. The government bearing down on believers is worthy of time, attention, protest, argument, defense of innocence, bold declaration of conscience, and assertion of the rights of citizenship. If we miss this, I fear that we who love Paul’s theology are missing Paul’s example.

Let’s be clear: the Bible does not commend us losing our minds over persecution. To the contrary, we’re fearless. We are ready to die for Christ (see Hebrews 11, which is just awesome on this point). But neither does the Bible commend a kind of imperturbable equanimity in light of suffering, persecution, and the usurpation of our rights. The biblical heroes descended into pits of anguish over sin and suffering. The biblical leaders defended themselves vigorously, knowing like Moses did that God himself was behind their call for justice.

We who love the gospel should feel absolutely no shame, then, when waves of grief pass over us. It is right in terrible times to mourn. Being Christ-centered, in fact, means that we mourn as he did–fully and without inhibition. You don’t have to go to the funeral of a believer and smile through it all. It’s not wrong to cry. It’s right, I think, to weep. Something is functioning rightly if you do.

In addition, we should feel no shame in protesting evil and mistreatment. Whether we’re thinking of Moses, Paul, or others, it is profoundly right to do so. Before he quieted himself on his way to death, Jesus declared his absolute innocence and moral rightness before Pilate (John 18:33-38). Christians must speak up when attacked. If we do not, our public witness will be endangered; if our public witness is endangered, then the gospel may well be silenced. It is right to meet even smaller-scale challenges with Mosaic and Pauline boldness.

Christians don’t care about losing power. We’re not afraid of no longer being political kingmakers. We care about being free to speak truth so that lost souls can find the grace of God shed through the cross of Christ. It is not wrong to speak up. It is right to do so. And it is not wrong to grieve. In fact, in a fallen world, to be truly Christlike, we must do so.

But even in justifiably deep sadness, we grieve with much greater hope, because Jesus is returning, and he will right every wrong. He will end the need for self-defense and consummate a kingdom of righteousness in a world of love (1 Cor 15, Rev 20).

January 12, 2013
Can Modern Christians Learn Theology from Slaveowners?
Next Post

Black Americans Discover Classical Education (part 2)
The COVID school lockdowns have led to a surge of Black parents...
view all Evangelical blogs
What Are Your Thoughts?leave a comment