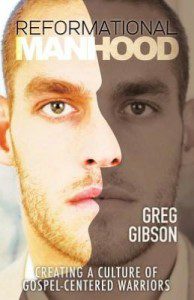 One of the most encouraging things that we get to see as believers is the emergence of faithful younger voices. I guess I should note that I’m not, uh, old, but still, I’ve been encouraged by the recent release of two books written by talented and faithful young men.

The first is called Reformational Manhood: Creating a Culture of Gospel-Centered Warriors (BorderStone Press, 2012). It’s written by a young pastor named Greg Gibson who runs this resource network. Greg’s a great guy who graduated from Boyce College and The Southern Baptist Theological Seminary. He’s a young husband, father and author, and his text is a stirring call to fellow men (and young men) to a) love the gospel and b) use their manhood to the glory of God.

In his well-written book, Greg mixes in textual explanations with personal reflections, and he gets your attention. I particularly enjoyed his story about how he, in trying to be a godly protector of women, had to face down a guy who was threatening his girlfriend (90-92). Get Reformational Manhood, read it with your son or your youth group, and be inspired to go to work in Christ’s kingdom as a man. 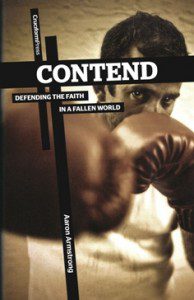 The second is called Contend: Defending the Faith in a Fallen World (Cruciform, 2012). It’s written by a young writer and leader named Aaron Armstrong, who blogs here. Aaron’s book will help us to see that courage is both desperately needed today and in surprisingly short supply. Everywhere we’re being tempted to compromise and hide our light, and many young guys today are leading the way in this regard. How fitting that a young man would summon us back to speak boldly on behalf of Christ.

A swatch from the short book:

All Christians are called to contend, in various ways and in the various roles to which God has called us. This requires us to take what is often the more difficult path, doing what doesn’t come so naturally….Contending takes the narrow way; it is not a path to travel alone (51).

If you’re seeking some encouragement for the future of a strong gospel-driven movement, look no further than the young authors and pastors and leaders who are showing us that they will pass on, and not drop, the torch.

February 9, 2013
The Children We Need Most Are the Ones We Don't Want
Next Post

February 12, 2013 What Is Manhood & Womanhood? Two Interviews on Gender & the Gospel
Browse Our Archives
get the latest updates from
Thought Life
and the Patheos
Evangelical
Channel
POPULAR AT PATHEOS Evangelical
1

How the Loss of Family &...
Cranach
Related posts from Thought Life