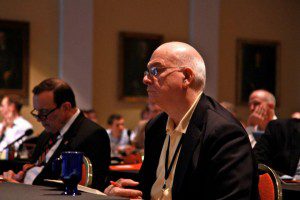 I recently had the privilege of interviewing Manhattan pastor Tim Keller for Christianity Today. The interview was about Keller’s new book Encounters with Jesus: Unexpected Answers to Life’s Biggest Questions (Dutton, Nov. 2013). It’s a book that would be marvelous to read whether for one’s own edification or for the purposes of discipleship or evangelism. If you’re in college ministry, and in particular ministry to thoughtful students on a secular college campus, this book will be very valuable.

In the course of my free-ranging conversation with Keller, we touched on some matters that were not directly related to the book and thus weren’t included in the CT interview. I was helped and heartened by Keller’s characteristically winsome, gracious, and convictional thoughts on these topics, and I’m glad to share them.

Keller on quoting cultural authorities in his preaching to “bring people along”:

The only reason to do so is if you’re in an Acts 17 setting. In Acts 13, Paul goes to a synagogue and expounds the Bible. But these are people who trust the Bible…so Paul does a very simple exposition. In Acts 17, Paul’s talking to people with no faith. There’s disagreement over how much he’s quoting, but he quotes poets and pagan authors and makes a more common appeal to natural reason, as it were.

What I try to do since I have people in a spectrum—people who don’t trust the Bible at all or people who trust it a lot—so what I do is expound Scripture, and then I add sources where people agree. I’m not basing my authority on Dylan Thomas, but when I’m able to bring in someone that the broader culture really trusts, it helps the people who doubt biblical authority to see how the Bible is true.

If I was speaking in a Mars Hill situation, I might give a topical talk like Paul did. So most of my preaching is somewhere in the middle. I’m supplementing my points to make it a little easier for the skeptic to accept my point. I’m trying to bring people along; I want the person to come with me. In the earlier parts of my sermon I’m trying to fortify—this psychologist says that, and so on. But at the end, I’m bringing in Jesus as the solution to the problem, and I’m not using those sources anymore.

Keller on how the church should speak to the issue of homosexuality:

You always want to speak in the most disarming way, but still be very truthful. Both disarming and truthful. I’m not sure most of us speak in that way—trying to be both. Ed Clowney, former President of Westminster Theological Seminary, said this many years ago: We tend to say we preach the Bible, but you tend to preach the answers to the questions you’ve posed to the Bible. Whether you know it or not, you read the Bible with certain questions. A Korean might have a question in mind when he reads that an African wouldn’t have. Right now our culture asks certain questions and we can’t help but respond to them. We do that in the most disarming way, but to some degree we can’t ignore the culture’s questions. We need to give biblical answers to the culture’s questions. You don’t give them the answers they want, you give them the answers they need. You can’t be a responsible pastor if you don’t.

If we are going to shepherd and teach, we must give the most disarming and truthful answers.

Keller on how the church should handle the shift to transgender identity in the broader culture:

Jerome Kagan in The Atlantic has talked about how we’re all wired—there are three basic ways to deal with threats. Some run, some fight, some stop and get philosophical. You find this insight in neurochemistry—across 36 cultures, these instincts are wired into us. These are very much who we are. In only a small percentage of the threatening situations is our habitual approach the right one. The worst thing parents can do is listen to the culture when it says, “Let your child be who that child is. Don’t try to change him.” Kagan says that’s the worst thing you can do. Children need to be pulled out of their natural instincts. Parents need to intervene and not let their natures run them. Doing so is a form of child neglect.

I’ve never forgotten that with the transgender question. We’re told we can only affirm [this identity] today. The lack of wisdom in this response will become more evident over time. We’re now a radical individualistic culture. If you do anything against it, you’re sacrilegious. I think we’ll see 20 years of mistakes, and then we’ll realize it wasn’t a good idea.

Keller on the state of the complementarian movement:

The arguments are pretty well made now. At this point, complementarians need to get our own house in order and show that our families and churches are thriving places. That’s more important than anything right now….Kathy and I are very committed to saying that Christians are committed to complementarianism.

(To this last point, see this CT interview, in which Keller makes his stance known.)

May 30, 2014
Tim Keller: "There Is a Bar of Justice Somewhere for Everyone"
Next Post