Two days ago, I wrote about the cultural significance of American Sniper. Today, I want to zero in on the film itself, and to suggest five takeaways from it.

1. Bradley Cooper is now a legitimate star. His performance as Kyle is exceptional. Cooper does not need a ton of exposition or dialogue to communicate the nuances of his characters. In this and other recent films, he regularly exhibits what you could call an “active stillness.” He is calm and motionless, but churning inside. This may sound easy to do, but precious few actors can pull it off–Russell Crowe when he’s invested in the material, Daniel Day-Lewis, Christian Bale, Tom Hardy.

Cooper displays the idiosyncracies of Kyle’s character. Kyle is a man of action. His blood runs hot. Yet his power of concentration means that he is absolutely focused on what is in front of him. For some of the movie, this is his wife. At other points, it is on the enemy. At all times, Cooper succeeds in drawing our attention, because he is a man to be reckoned with. I’m not sure who is putting together a better body of work right now than Cooper.

2.  The success of American Sniper shows us that lots and lots of people are inspired by virtue. The last decade has witnessed one anti-war movie after another. Film after film foolishly drops all boundaries of right and wrong, attempting to blur the lines between the good and the wicked. This sort of indoctrination works well in controlled environments, like the college campus, where all you hear is one side of the matter.

But in the real world, as people learn of the terrible effects of unbridled evil, amorality often doesn’t persuade. Heroism, it turns out, is in many cases more interesting to watch than tortured moral confusion. Sure, there’s a place for that kind of film. But the box-office draw of American Sniper shows us that people find martial virtue compelling.

Hollywood can continue to churn out its never-ending batch of half-baked, largely-uninteresting superhero movies. Or it could try to portray honest, normal, imperfect heroes. I suspect that studios who choose the second option and devote attention to it might be rewarded handsomely.

But who am I to stop the major studios from greenlighting the next Adam-Sandler-in-a-state-of-near-infancy picture? Those, after all, are doing so great right now. In all seriousness, I find it striking that Cooper has moved away from goofball films. He’s growing up before our eyes, and taking on mature roles that ask serious questions about important matters. One can hope he takes some in Hollywood with him.

3. The film shows us the growth of Chris Kyle. Early on, Kyle is motivated by the simple desire to defeat evil terrorists and protect the innocent. As time goes on, he finds a wife and makes a family. These are classically mature things to do for those called to marriage. But Clint Eastwood’s movie shows us, however gently, how Kyle develops over time. Far from his family on his fourth tour, he comes to see that he has served his time in Iraq. It is time to go home.

Kyle professed to be a Christian, and it seems to me that he made choices and gave testimony consistent with humble evangelical faith. I didn’t love the language in American Sniper and I feel no need to watch the romantic exploits of other couples, but I was thankful that the movie tracked his maturation. It’s not my view that Eastwood is trying to say that Kyle became virtuous in leaving war, contra this TIME commentary. My take is that both paths are virtuous–serving your country and then returning home.

Virtuous fathers and husbands are heroic, yes. But so are virtuous warriors.

4. American Sniper has a simple power that is unusual today. It doesn’t depend on special effects. It doesn’t have superheroes who are formed in a CGI lab. It feels like a movie for adults, unlike so many of the comic-book fantasies the studios ask us to endure. Many of them are a waste of time and money.

I loved the simple, efficient craft of the movie. The end sequence is burned onto my mind. A single trumpet plays a melancholy melody against a backdrop of angelic voices. The end sequence does more to convey the sadness of death than any extended, overwrought, slow-motion scene could. Chris Kyle was taken from his family. You feel the loss keenly.

5. The film reminds us that we must fight for the best things in life. They will not come easy. A good marriage does not happen without effort. The defeat of the wicked, those who would kill women and children, cannot take place without sacrifice. The development of personal character will not eventuate without serious attention.

Christians are in a spiritual war. We’re not living out a theological athletic contest. We’re not playing games. We’re in a battle for eternity. Satan really does want to destroy us. I watch a film like American Sniper, and I am reminded of the need to fight against laziness, sloth, low expectations, and evil. Eastwood’s movie is so counter-intuitive today. Many films sell us fantasy-lives. You can live without moral responsibilities in a world that only serves you and your desires.

American Sniper says something very different. It tells us that gains in life will be hard-won, and that sacrifice will be necessary to survive and prosper. This is an old-fashioned insight for an instantaneous age. We need it. When we see footage of the funeral of Chris Kyle, we are reminded of just how high the cost of virtue can be. 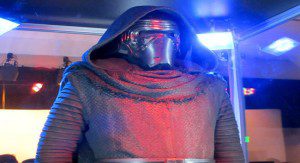 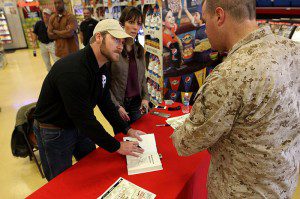