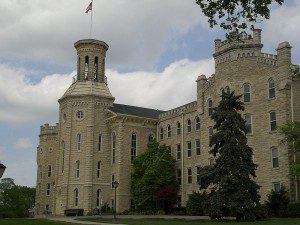 Wheaton College, a leading evangelical institution, finds itself in the headlines this week after placing a professor on leave. The professor, Larycia Hawkins, wore an Islamic hijab (female head-scarf) and articulated sympathy for Islam as a religion on her Facebook page. Wheaton drew strong feedback when Hawkins’s actions and views became public, and the college referenced its statement of faith in placing Hawkins on leave.

I was puzzled by several responses, including this one from Jonathan Merritt, which seems to argue that Wheaton’s action means it isn’t fulfilling its academic mission as the “Harvard of evangelicalism.” I confess this confuses me, because Wheaton is an evangelical school. It is not Islamic. It has an evangelical statement of faith. It’s a very good statement, I must say. Here’s how it starts out:

WE BELIEVE in one sovereign God, eternally existing in three persons: the everlasting Father, His only begotten Son, Jesus Christ our Lord, and the Holy Spirit, the giver of life; and we believe that God created the Heavens and the earth out of nothing by His spoken word, and for His own glory.

Note that this is anything but a controversial statement in terms of evangelical theology. Of course Wheaton is Trinitarian. The Bible is Trinitarian (Matt. 28:19; John 10:30; John 16:7; 2 Cor. 13:14, among numerous other texts). Islam, by contrast, is not Trinitarian. It affirms just one person as God, Allah, where Christianity affirms three persons as the one God Scripture reveals. These are core matters, and they are definitive matters. To fail to confess God as Trinitarian is to deny not only what the historic creeds and confessions of Christianity affirm, but to deny what Scripture clearly teaches. Thus, while Islam and evangelical Christianity are both monotheistic, there is an impassable gulf between the two religions.

Wheaton is firmly in the stream of evangelical theology in affirming a Trinitarian God. In fact, it must affirm a Trinitarian God to be evangelical. This isn’t like one’s policy on skirt length or smoking on campus. If Wheaton ceases to be Trinitarian–if any evangelical school ceases to be Trinitarian–shut the whole thing down. It’s not as if we’re talking about take-it-or-leave-it matters here. We are considering the very foundations of Christian faith. If the Trinity is present and happily affirmed, then we’ve got a Christian foundation; if the Trinity is absent and rendered negotiable, then we’ve lost our Christian foundation.

With this quick theological workup established, we’re prepared to understand this confusion caused by Hawkins. I am saddened by her actions and statements like this one, which I pray she disavows: “I stand in religious solidarity with Muslims because they, like me, a Christian, are people of the book. And as Pope Francis stated last week, we worship the same God.” This is not a sound statement. It is true that Christians and Muslims alike believe in a monotheistic God, but Christians believe in a Trinitarian God, and that Jesus Christ is the Son of God and the fullest and final revelation of God (see John 1:1-18). We do not simply mean by this that Jesus merely offered his take on who God is, but that the crucified and risen Christ is the very means by which we are saved, God made flesh for our eternal rescue.

I understand what Hawkins means by her statement, but it is deeply problematic, and cannot be affirmed by an evangelical school (especially within the wider context of her remarks). This is not because of a vague sense that it is troubling; this is because statements of faith set the terms of faith and practice for an institution or church. The response to Wheaton on the part of some seems to reveal a belief that personal feeling and emotion trumps doctrinal standards. But the opposite must be true, or else you can kiss the whole enterprise goodbye. If our schools and churches do not hold to Christian doctrine, they are not Christian anymore.

If they are not Christian anymore, then by all means, shut the lights out.

Many evangelicals share Hawkins’s desire to promote love and kindness to Muslims. We do not desire war with Islam, but pray for peace. But love does not mean softening Christian conviction and wearing the garb of Muslim women. Christian love for Muslims means preaching the gospel of grace, the only message that saves, and showing Muslims that Christ has transformed our hearts and lives. In sum, we must act toward Muslims as we would act toward any non-converted person. We preach the same gospel that has saved a wretch like us, and we seek to win them to the true faith by godly witness.

In sum, the response to Wheaton’s commendable action regarding Hawkins shows us how weak evangelicals are in three areas: 1) our understanding of doctrine, 2) our understanding of Islam, and 3) our conception of love. To the first, doctrine is the very fabric and substance of our faith. We can’t separate doctrine from practice; doctrine shapes practice. To the second, Islam is not Christianity. The most basic theological inquiry shows that the two religions have commonalities but end up in different places. To the third, love does not mean affirming any belief, and any practice. Christian love is gospel-shaped and inescapably Christic (1 John 3:16; 4:10). We do not offer people vague affirmation with a low-calorie Jesus spread; we offer them a transformative Jesus, a figure who norms all our beliefs, rebukes all our sin, and transforms us comprehensively (1 Cor. 6:11).

In the end, the question before Wheaton, and before evangelicalism more broadly, is this: are we going to remain meaningfully evangelical? Will we hold to our convictions, or relinquish them before a culture that demands we lay them down? I am thankful for Wheaton’s gracious but doctrinal response. I applaud President Ryken and the administration, and I pray that Professor Hawkins finds her way out of confusion to the fog-dispelling light of Christ.

Update: I have corrected the language regarding Islam’s doctrine of God. Thanks to sharp-eyed readers for their help.

November 2, 2015
Should Pastors Feel Pressure to Produce Scholarship?
Next Post

Evangelical
Are There "Good Things" in Evil Deeds Like...
Thought Life
TRENDING AT PATHEOS Evangelical