Saint West and the Year of Mercy

“To pass through the Holy Door means to rediscover the infinite mercy of the Father who welcomes everyone and goes out personally to encounter each of them. It is he who seeks us! It is he who comes to encounter us! “ ~ Pope Francis’ Homily at the opening of the Year of Mercy

I don’t know for sure what is going on with Kim and Kanye West, but I do know one thing for sure: God, who seeks each one of us out to personally encounter us, wants to personally encounter them both as well. It seems to me like it’s very easy for us to forget that and come to the conclusion that they are a lost cause. That isn’t true. God seeks us all out, one by one. The same God that works in my life, and in your life, works in their lives. He doesn’t work in our lives because we deserve it, He works in our lives because He is merciful. You and I did nothing to earn God’s love, it is a Grace. One that is given to every single person that He created. That includes Kim and Kanye West. If that scandalizes you, you may wanna take time in front of the Blessed Sacrament and talk to Jesus for a little while.

This week I have seen the ugliest comments from Catholics on so many subjects that it’s hard to keep track of them all. Negative comments about Muslims, Syrian Refugees to the comments about Kim and Kanye and their newest baby, a son named Saint…. It just made me wonder if we really are as pro-life as we say we are.

What I saw this week were a lot of Catholic pro-lifers dooming a newborn child because of who his parents are. I don’t think anyone should  look at a 3 day old baby boy and say he is destined to be a horrible person because his parents are Kim and Kanye and they named him Saint. But being pro-life and doing that, is just so many kinds of wrong. Being pro-life should at least mean that you don’t make fun of a newborn baby, who didn’t pick his name and is a human being who made it out of the womb alive.

I have an uncle who is named Santos, which means Saint in Spanish . People tell me that it’s different and  people  shouldn’t name kids Saint in English because it’s not right culturally, I don’t think that is what the problem is among religious people. The truth is that we don’t think that Kim and Kanye are holy enough to name their child a name with ties to holiness. That is what it boils down to. We have declared them unfit for holiness and so we will freak out about everything they do that even resembles a step towards God and mock it because we don’t see how it is even possible that God can be working in their hearts.

Do you know that all three Kardashian sisters went to an all girls Catholic School in Los Angeles? That they are Armenian Christians? That faith is a part of their life, even if not lived perfectly?  Have you seen the pictures of Kim and Kanye when they baptized their first child, their daughter North?  Take a look at them, they are beautiful.

I began watching Keeping Up With the Kardashians about 3 years ago. I was so sure that what I was going to find was what everyone told me about them, that they are stupid and have absolutely no morals. What I found was a family who loves one another, who is happy about every life that comes into it from the moment of conception and who doesn’t think that babies are the enemy of the earth. They aren’t perfect and there is plenty of things that I disagree with them on, but they are still trying to be good people. When the oldest sister, Kourtney had her first child, they were all there as a family to watch the baby come into the world. She briefly considered abortion as an option to her pregnancy because it was unplanned and then after seeing the sonogram she said she could never have done that because it was a baby in there. She said that, on the show, on camera and it aired on TV. Not one single pro-lifer saw it or brought it up because we are too busy calling them stupid.

As I watched the episodes of Kim, Khole and Kanye in Jerusalem, I wondered if they knew where they were. If they know who Jesus is and if it meant anything to them and then Kim looked over her hotel balcony and said to Khole “Can you believe that Jesus walked down there?” and I saw something in her face, a question. I don’t know what she was thinking but I know what happened to me when I stood at the tomb of St. Peter in Rome and I asked “Can you believe that St. Peter is buried here?”. I suddenly realized it was all true. “You are Peter and upon this rock, I will build My Church”, the words of Christ came to life and I knew it was all true, and that was the beginning of my new life. It hasn’t been perfect, I’ve made a ton of mistakes and I have fallen on my face a few times. I have said things that I regret, I have done things that I shouldn’t have, I have no formal education on how to speak theologically so I don’t always make myself clear. I refuse to go in a box so people can stick a label on me and be comfortable. It’s been quite the roller coaster, but it all started with that awe of Jesus being real. Because I know where I was and how He came to meet me, I can’t by any means doubt that maybe Kim asking that question will lead her to Him too. And if we are truly Catholic, then we should spend more time praying for that than we do bashing her and her family on social media, no matter what they name their kids.

The Year of Mercy is a perfect time to start doing that.

I don’t remember posting these pics of us in Jerusalem. This was where Mary took Jesus to wash him off after he died on the cross 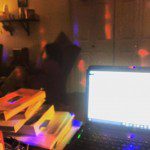 Abby Johnson and the Problem With...
Femina Ferox
Related posts from Through Broken Roses