The Tomb of Grief

Last week I wrote about what happened the day that my son Anthony died by committing suicide, it had been five very fast but extremely heavy weeks. Today it’s six weeks and a day after the one year anniversary of my uncle’s death. To sum up how this last year has been let me tell you a story: the neighbor told me yesterday that the cat my dead uncle gave to my now dead kid was found dead months ago by the mailboxes. That is a lot of death in one sentence, if it’s hard to read, just try living in it.

There are so many emotions that come with the grief of losing a child by suicide. I have no idea what terms to use, what is “responsible” to share or what I am even doing sharing any of it to only attract responses that, even if well intentioned, only show that unless someone has been here, they just do not know what this is like. Even people who have lost a child this way don’t know what I am going through on some level because Anthony was Anthony. He had his own personality, his own history, his own wounds, his own delusions and his own choices. Some people have grandchildren; some wish they at least had that. Some have letters left behind, I wish I had that. There are a lot of “at least you got”s and “well, at least I don’t have to deal with _____”s.

Anger is my primary emotion at the moment, which if I am honest, has been my primary emotion for a very long time. In fact, the evening that we found Anthony, we were on our way to anger management classes. I am very much aware that most of my responses to what people say about Anthony’s death are rooted in a very deep seated anger. What is the cure? Forgiveness is what God keeps telling me as I stomp my feet and insist on holding on to every single hurt anyone has ever caused me. On the top of my list is my anger at God. I never asked to be created or to have to suffer so much because of other people’s choices going all the way back to Adam and Eve deciding a piece of fruit was worth all this shit.

What is my main wound? Where does the pain come from? I have asked myself these questions for a very long time. The answer came to me last week: abandonment. It became even clearer to me as I read this blog post written by a woman whose father committed suicide. She pretty much painted a very clear picture of what the source of all my heartache is. I have been abandoned by people since the day I was born when my father failed to show up and be a father. I have been left at some point or another by every man I have ever loved; few have come back not realizing the damage was already done. Stacey is the only one who has stuck around praying for God to heal us both and our marriage, but then everyone we love dies, so there’s that.

Is this post depressing? Probably. But this is my life. This is suffering. I don’t have the gift or grace that some have to hold it all in behind a smile and an “I’m fine”. I went to work yesterday for the first time since Anthony’s death and the three hours of having to do that exhausted me for the rest of the day. Which is why staying home is usually the best option.

I ask God where I go from here all day, every day. The only answer I seem to be getting from Him is “hand it to Me”. So I do. I hand Him all of it. All the anger, all the abandonment, all the pain, all the heart wrenching cries for this to be a dream and I will wake up soon.

What I fear most is that in moving on, I will forget Anthony. If I am happy then it means he didn’t mean anything. I feel an obligation to sit in my suffering to show everyone that he was real, he was good and he is missing. Seeing other people just move on makes me angry because it’s people who claim to have a relationship with Anthony that they simply didn’t have. Who are they trying to fool? Also, I have the need to let all of this pain out.

There is no going back to normal or going to something “better” from here, there is only moving forward with a broken heart. There are no books on how to parent a dead child. Maybe one day someone will write one, but for now I am winging it. I take him flowers, bury brisket tacos next to him and pray for him. I carry his memory with me everywhere I go and I try to not stay in this tomb of grief for too long but also I don’t avoid it. It’s like walking a tightrope.

What is helping right now is spending time with my family, watching Anthony’s children smile and laugh every day and making it to therapy, including writing.

And all of your prayers. Please keep praying. 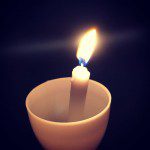 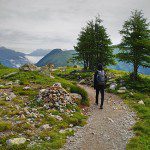 July 7, 2017 A Note From Way Back Here
Browse Our Archives
get the latest from
Catholic
Sign up for our newsletter
POPULAR AT PATHEOS Catholic
1

Christians Must Realize That The Pandemic...
A Little Bit of Nothing
Related posts from Through Broken Roses