A Quarter Century of Pagan Publishing With Anne Newkirk Niven

Finally! Your Witches & Pagans (or SageWoman) arrives and inside its glossy cover is a cornucopia of Pagan ideas, opinions, and information, right there in your own hands! Almost like, well… magick!

But like most magick, these magazines don’t manifest without thought, planning and intention. Each one is thoughtfully created by editor, designer, and publisher Anne Newkirk Niven, and she’s been doing it for nearly 30 years.

Witches & Pagans and SageWoman continue to exist while other print publications (Pagan and mundane) fall by the wayside — entirely because of Anne’s dedication.

“I’m doing this as a gift of love to the community,” she says with a hearty laugh. And also because “every time I tried to step away from this, the Goddess kicked me in the teeth. I believe that publishing these magazines is what I’m here to do, and you do what you do if you’re fortunate and able to pull it off.”

This journey, she says, began when she walked into a women’s bookstore in 1990 and saw SageWoman. At the time, she and her husband Alan owned a small print shop in Point Arena, California.

“I picked it up, bought it, took it home, cold-called the publisher, and said, ‘I want to print your magazine.'” She printed SageWoman (then owned by Lunaea Weatherstone) until 1994, when Anne became the managing editor and publisher, too. Over time, she and her husband published The Green Man (a male-only counterpart to SageWoman) which morphed into PanGaia; newWitch (a pop-culture witchy magazine); The Blessed Bee (a Pagan family newsletter), and Crone magazine (for eldering women.) Witches & Pagans came about as a union of newWitch and PanGaia in 2009.

Anne is completely self-taught, from copy editing to graphic art, and says that she and Alan gleaned much of their knowledge by printing other people’s publications, many of them other Pagan magazines.

“We tried to learn from our printing clients, saw them do things that worked — and things that didn’t. We were self-taught on instinct, and too stubborn to stop.”

Anne’s publications and their parent company also have a healthy presence on the web. Alan encouraged her to start the major Pagan blog site Pagan Square, which she admits tested her urges to take editorial control.

“I had a hard time releasing creative control. There’s no way to run a blogosphere and edit every post. It’s not going to happen. With blogs, you just have to trust your writers. You can’t edit them the way you do in a magazine.”

She notes that the timing of Pagan Square’s arrival online was auspicious.

“Shortly after I put out a call for contributors, we had several dozen bloggers,” she says, noting that Pagan Square actually helps people discover the print magazines. The Witches&Pagans Facebook page also caught on early, with about 325,000 “likes.”

“We rode that wave really well. We got in when everybody did, and got big really fast.” Social Media “brings in people who otherwise don’t know we exist,” and Witches&Pagans has a presence on Twitter, Tumblr, and Instagram as well as Facebook.

Readers Are the Reason They Exist

Changes in the publishing industry since the Great Recession means that BBI Media no longer is a profit-making endeavor. Alan returned to his career as an audio recording engineer, and Anne juggles two other part-time jobs to make ends meet.

“Both Alan and I now have side gigs that provide most of our income.”

While more and more people turn to online resources, Anne still sees the value of holding a real magazine in your hands rather than staring at a screen and clicking. A magazine is vastly more satisfying to keep than an online bookmark.

“Print has a presence that is not matched, and is not fast on its feet,” she says, adding that even old issues are highly sought after. “We sell past issues and people still pay good money for them.”

She notes that all issues of SageWoman, PanGaia, newWitch, and Witches&Pagans are still available for purchase.

Besides dedication to both Goddess and community, Anne is also dedicated to her publications. A stickler for detail and editorial content, she strives to continue producing the kind of magazine her customers expect.

“I refuse to cut back on the work it takes to make it happen. I try very hard not to cut corners. Every article and interview is edited, every layout is hand-designed. I’m doing it the only way I know how.

“People get a sense of community out of reading our magazines. You will not find an article that attempts to take somebody and tear them down. We have a beautiful, wonderful set of interlocking communities that I want to uphold and uplift. You won’t find a scandal on our pages. We’re there to uplift and bring the community together, not tear us apart.

“The community has uplifted us many times, most recently when Borders went down. The Borders chain owed us $30,000 that we were never going to be able to collect when it went bankrupt. Our printing and postage costs run about $18,000 per issue, and we were not sure where that was coming from. We asked for donations on the web and raised $28,000 online. Our readers are incredibly generous. They are faithful and they are loving.” 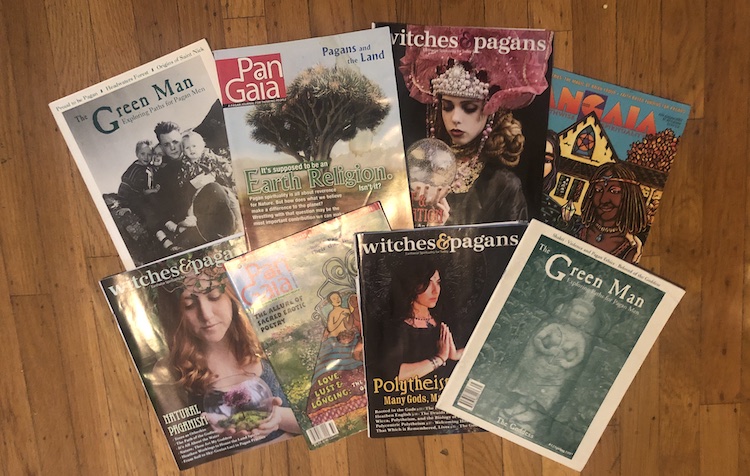 Just like the publisher herself, it could be that readers also realize that Witches & Pagans and SageWoman are more than just paper in their hands. Anne likens the magazines to “some tiny little corner of sanctuary… stories of people and places and things, and what brings us together as a community.”

Anne’s dedication to her magazines’ integrity extends to her advertisers. “We will not take just any ad that shows up. We don’t take ads from non-Pagan vendors. We’re vouching for what’s there.”

That’s why you won’t find ads in Anne’s magazines that offer to remove curses for $5,000, or unverifiable claims, like “buy this candle and you’ll win the lottery.”

“Advertisers are generous supporters of our work, and important to my bottom line, but my readers are more important. I don’t want to damage my readers’ trust to benefit an advertiser who takes advantage of our readers.”

A Ministry in Print?

Does Anne’s dedication to the quality of her publications, her community, and her readership without significant financial gain seem almost… religious? A ministry? Could be. Anne discovered her Pagan path while working on her master’s degree in theology at the Pacific School of Religion in Berkeley, intending to become a United Methodist Minister.

Then “I read The Mists of Avalon and The Spiral Dance and went, ‘ohhhhhh! That’s who I have been, and what I have been searching for all these years.”

Anne continued her seminary studies, spending her second year as a part-time ministry at a church in Point Arena, California — where she met her future husband, Alan. She ended up leaving the ministry and becoming consecrated as a priestess of the Lord and Lady; her consecrating priestess was notable Pagan author Diana Paxson.

In studying with Diana, Anne discovered that “my path was not to be pastoral or to be a priestess. My path was to be a publisher. I just didn’t know it yet.” A publisher, she says, is about “bringing together and amplifying voices. It’s not my voice. In a single issue, there’s about 30 people whose voices I’m able to publish — story, letter, poem, drawing — I put it out as widely as I can. That’s what I do.

“Each of these people has something to say. Together, we have the ability to share it with more people. We are a choir… many voices, woven togethe. That’s why we have so many writers. That way, we have critical mass.”

Even so, Anne is essentially a minister at heart, and her ministry is her magazines. She says they touch readers for different reasons.

“There’s no one telling you how you’re doing it wrong. One reason SageWoman has survived so long is that it is not a typical ‘women’s magazine.’ Look at the subtitle: ‘Celebrating the Goddess in every woman.’ That’s what it’s about. That’s a universal message that we all need.”

But both magazines still carry an over-arching message: “Be good to one another.”

“That’s it. That’s the whole thing right there. I’m trying to help us to be good — as Pagans, as Witches, as Goddess-worshippers — to one another.”

The next two issues of SageWoman will focus on the “Magic of Air” and the “Magic of Fire.” Upcoming Witches&Pagans issues will center around “Plant Allies” and “Folk Magic.” If you are interested in contributing you can email Anne directly at editor2@bbimedia.com

About Debra DeAngelo
Debra DeAngelo is a freelance publisher, editor and writer, retired from 26 years in print journalism, with multiple state and national awards for opinion/commentary writing. She writes feature stories and book reviews for Witches & Pagans and SageWoman magazines. An eclectic, solitary, garden variety Pagan, her passion is tarot. She reads, and runs monthly tarot workshops. She is also a massage practitioner, feline fanatic, and lifelong horse-a-holic. Find her at debradeangelo.com, Twitter, Instagram and Facebook; reach her at debradeangelo@gmail.com. You can read more about the author here.
Previous Post 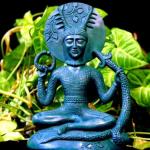 February 6, 2019
The Book of Cernunnos - Call For Submissions
Next Post 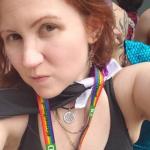 April 19, 2019 The Tea Addicted Witch: Scarlet Magdalene
Browse Our Archives
Related posts from Through the Grapevine