What’s Wrong With Getting Drunk?

What’s wrong with getting drunk? Paul’s one-word answer in Ephesians 5:18 is as hard to define in English as it is in Greek. “Be not drunk with wine, for that is” – “dissipation”? (NKJV, NAS) Or is it “debauchery”? (NRSV, NIV) Most of us need a dictionary to understand either of these words, even though they are in English.

“Debauchery” (originally a French word) is defined by Webster as “extreme indulgence in sensuality.” “Dissipation” is defined as “wasteful expenditure,” from “dissipate,” meaning “to cause to spread out or spread thin to the point of vanishing.” So where does that leave us?

“Wherein is excess” (old KJV) is a little more understandable and concise than the other versions. “Because that will ruin your life” (NLT) may be less literal, but it is the easiest translation to understand and the closest to the meaning of the word Paul uses.

Asōtia is the noun Paul uses to explain what’s wrong with getting drunk. The noun form is used three times in the New Testament. In addition to the Ephesians passage, Paul warns in Titus 1:6 that church overseers should have children who are not open to accusations of asōtia or incorrigibility. In 1 Peter 4:4, Peter says that unbelievers are surprised that his readers do not join them in the flood of asōtia that he describes in the previous verse. He describes asōtia with a list of vices that includes three terms for alcohol abuse, plus a term for “licentiousness” that goes beyond mere fornication and adultery (aselgeais).

Asōtia is also used twice in the Greek Old Testament. In Proverbs 28:7, it is used to translate “gluttony.” And in 2 Maccabees 6:4, we are told that the Greeks filled the temple with asōtia and carousing (komoi, wild partying with both food and drink). The adjective form asōtos is used to describe the woman on the prowl in Two-Time Square in Proverbs 7:11, where the Hebrew says she is loud and “rebellious.” To be an asōtos is to indulge so excessively that one destroys oneself.

Possibly the most famous use of this Greek root is in its adverb form (asōtōs) in the parable of the Prodigal Son (Luke 15:13), where we are told that the son squanders his share of his father’s inheritance in living “riotously.” While the older brother in the story claims that the money was spent on harlots, the point of asōtōs seems to be that the inheritance was wasted in a wild and reckless manner.

Uses of asōtia outside the Greek Bible yield much the same results. Commenting on this word in his Theological Lexicon of the New Testament, Spicq observes that “the asōtos not only wastes his goods, but loses his time, degrades his faculties and abilities, and consumes him.” Philo writes that the besotted, debauched (asōtos) life is “a threat to everyone.” Heraclitus says, “Charybdis is a good name for the insatiable, spendthrift debauchery of drinking bouts.”

Testament of Judah 16:1, a line from a biographical fiction piece from the second century BCE, applies this word specifically to wine. Here, Judah the patriarch warns, “Watch out for the limit of wine, for in it are four evil spirits: of lust, of feverish passion, of asōtia, and of sordid gain.” A few sections earlier in the piece (14:1), Judah uses the exact same words and forms as Paul does in Ephesians 5:18: “Be not drunk with wine.” His rationale is that too much wine confuses the mind by filthy thoughts (rhuparois – 14:3); the spirit of error invades one’s mind (14:8), causing one to become foul-mouthed and lawless.

The philosopher Epicurus, who is famous for his line that “the beginning and root of all good is the pleasure of the stomach,” nevertheless declares, “When then we say that pleasure is the goal [of life], we do not mean the pleasures of profligates (asōtōn)…For it is not continuous drinking bouts and carousing, nor the [sexual] enjoyment of boys and women, nor of fish and other items carried on the extravagant [dinner] table, which produce a pleasurable life, but sober reasoning.”

Most of the time, asōtia refers to excesses of food and drink; for sexual indulgence, other terms tend to be used. In the case of food, it refers to gluttony in its most unhealthy form. Dio Cassius describes a character named Plautianus as being “asōtotatos (the most debauched) of men, so much so that he both feasted himself and vomited at the same time, because of the load of foods and wine he was not able to digest.” (In the next line, Dio tells us that this character was also a notorious pedophile who preyed on both genders.) Josephus says that once the emperor Vitellus “left the palace drunk after a debauched (asōtos) dinner.”

Exhausting one’s resources is another common meaning. Papyrus Florentini 99.7 uses the verb form asōteuesthai, “to exhaust all of one’s resources,” to describe a son who spent all his money on harlots, like the Prodigal Son was accused of doing. Athenaeus tells of several asōtoi who devoured their entire family inheritances irresponsibly, including one who sold his father’s monuments (gravestones?) worth 1000 drachmae to finance his riotous lifestyle. Athenaeus states that such asōtoi were often punished by the Areopagus at Athens for such behavior.

The meaning of asōtia may be illumined further by comparing it to other vices and virtues. Asōtia is regarded as the opposite of aretē (virtue, moral excellence). In the Tablet of Cebes, Asōtia is a harlot accompanied by Akrasia (Lack of Self-Control), Aplēstia (Insatiability), and Kolakeia (Lasciviousness). In his Nicomachean Ethic, Aristotle declares asōtia to be the opposite of aneleutheria or “stinginess.”

Asōtia gets paired with vices such as being ataktos (unruly) and aselgēs (licentious), and with rhathumia (laziness) and kinaidia (horribly obscene behavior, even by Greek standards). Both Spicq and Kittel theorize that asōtia originally meant “incurable,” which is precisely what the expression asōtōs echein means, an expression that is close to our modern concept of “addiction.” (Similarly, Clement of Alexandria claims that asōtia means “beyond salvation,” and takes Paul’s warning to the Ephesians as a reference to the “hopelessness of the drunkard.”)

What a picture of the dangers of substance abuse! (Don’t get the wrong idea! Paul is not singling out wine, as if it were OK to be drunk with beer, liquor, marijuana, or other mind-altering drugs. No, he is forbidding the use of any mind-altering substance to get high.) Asōtia may be described by our concept of “getting wasted.” The word gives us a picture of someone pouring their resources down the drain on food, alcohol, and other indulgences, ruining their mind, health, and life in the process.

As I put it in chapter 5 of my book, What’s on God’s Sin List for Today?, the bottom line is that for Paul, getting drunk is a reckless, harmful form of excess. That’s hard to say in just one word. But Paul did. Too bad we don’t have any one word in plain English that does the same trick. 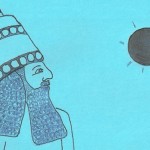 August 7, 2017
Jonah and the Eclipse in Ancient Nineveh
Next Post 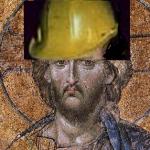 August 14, 2017 Christ the Builder?
Recent Comments
0 | Leave a Comment
"My Greek professor is holding a "Stump the Professor" where we try to find a ..."
Matthew Fun in the Septuagint
Browse Our Archives
Related posts from Biblical Words and World