An Open Letter to YouthWorks

Let me join the chorus of voices welcoming Tic Long back to Youth Specialties, now part of the YouthWorks world.  Tic was nothing but gracious to me over my ten years of speaking at the National Youth Workers Convention, even though I know that some of my content resulted in him and the YS staff getting grief.  Tic took some chances involving me, including arranging debates over theological and social issues with guys like Duffy Robbins, Chap Clark, Fred Lynch, and, yes, Phil Chalmers (that last one is legendary).  Tic even patted me on the back after I bombed on the mainstage in 2008 (I wasn’t the first general session speaker he’s seen bomb).  Thanks, Tic.

In November, I wrote about my own unique vantage point on the YW acquisition of YS.  Now I’d like to leverage that vantage point to make one request of YW (and, by extension, YS).  But first, a story…

The last time I saw Mike Yaconelli was memorable for me.  I wasn’t in Yac’s inner circle, but he was always extremely kind to me.  He was in Minneapolis to speak at an event for Youth Leadership in 2003, the same year he died.  He let Doug Pagitt and me know that he’d be in town and that he’d like to treat us to a beer and a cigar.  So we took him up on his offer and met on Saturday afternoon at the Calhoun Beach Club — I could go there today and show you the table at which we sat; that’s how well I remember it.

At the time, YS was publishing books by emergent authors, an arrangement created by then-publisher, Mark Oestreicher.  Yac was taking some heat for that, particularly from the old guard at YS — some of the long-time speakers and authors.  Doug and I had heard that, and Yac confirmed it.  He said that his son, Mark’s, work on contemplative spirituality was also irksome to some of YS’s more conservative constituency.

But then — and I remember it like it was yesterday — he said, “YS has always been about pushing boundaries.  That’s why we started it.  It was never really about youth ministry; it was always about radicalizing the church for Jesus.  It just seemed to us that youth ministry was the way to do that.”

He continued, “I’ve been afraid that we’re losing our edge, becoming too mainstream.  So, you know what, if YS goes down in flames because of what you guys write, that’s great!  At least we’ll be true to ourselves.”

That sentiment, I think, was the impetus for Marko publishing my books and Tic inviting me to the NYWC.  They got some angry mail for that — I remember one letter from a church’s board of elders telling Yac that YS was apostate because they let me speak — but I hope it was worth it.

So here’s my open call to YouthWorks:

In other words, I hope that as YW/YS evolves, they will keep fostering the theological dialogue that YS has been known for.  Have people from the left, the right, the center.  Have evangelical stalwarts and feminist liberationists.  Invite theologians-of-color.  Get mainliners in the mix.

I know that YW/YS will continue to offer the best mission trips on the planet, as well as the finest in nuts-and-bolts training for youth workers.  I just hope there will still be a place for robust theological discussion outside of the academy, and YW/YS is uniquely poised to be that place.

It’s kind of funny to write an open letter because I know Paul and John at YW well — they’ve both served as my mentors, pastors, and friends (please, don’t hold that against them).  So I don’t really need to say this publicly — I could just email it to them.  And I’m not doing it to call them to account for anything, because I imagine they’re on the same page with me on this.  Really, this “open letter” is a foil get a chance to say to everyone involved in youth ministry: theology really matters.

I write this from the Montreat Conference Center, where I’m spending three days among youth workers talking about the theology and youth ministry, and from this vantage point, I’m even more convinced this is so.  Youth ministry as a profession is maturing, and that’s a good thing.  Let’s keep the theological conversation at the forefront of that maturation. 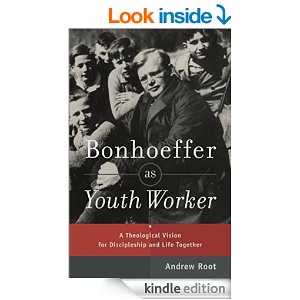