Here are just a few of the pics from yesterday, the day in which Rachel & Ratchet and Tony & Courtney got married, Jay Bakker witnessed, and Caroline Yang shot photos. Also, it was 23 degrees. 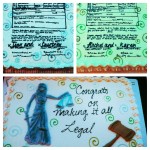 November 15, 2013 What Is It about Rome?
Recent Comments
22 Comments | Leave a Comment
Browse Our Archives
Follow Us!