There’s a very big difference between, on the one hand, making a theological, philosophical, or scientific argument for the existence of God and, on the other hand, making a personal statement about why you still believe in God despite your doubts. Those are two very different types of communication.

I am keenly aware of the difference. I’ve written many posts here that are the former, and I’ve got an entire chapter already written for a forthcoming book that is along those lines, arguing with Aquinas’s famous “Five Ways.”

But the biggest atheist blogger in the world picked it up, mocked it, told his readers that I had made the worst argument for the existence of God that he’d ever read, and pointed them here. They came, they told me I’m an idiot, and they left. (It’s shocking — shocking, I tell you! — that atheists don’t find one of my reasons for belief compelling.) I don’t imagine they’ll be back anytime soon.

So it goes in the blogosphere these days.

For those of you still reading, I was simply trying to say this: One of the reasons that I continue to have faith is that so many in the world do; so many — the vast majority, by anyone’s reckoning — that I cannot help but pay attention to that. I don’t think that all those people who believe in the divine, and all the billions who’ve preceded us on this plant who have believed similarly, are stupid lemmings. I think their belief deserves enough respect that I cannot shuck it off so very easily.

Take it or leave it. But I stand by it. 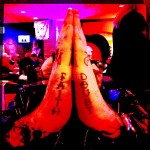 January 10, 2014 God Has Died...And He Has a Wonderful Plan for Your Life
Recent Comments
110 Comments | Leave a Comment
Browse Our Archives
Related posts from Theoblogy