John Caputo is the foremost American interpreter of Jacques Derrida. He’s also a friend of mine, and I admire his work greatly. Since his retirement from teaching he’s moved from philosophy to theology, an area largely unexplored by Derrida himself. The Opinionator blog has a sharp interview with Caputo:

G.G.: O.K., I guess you might say that all thinking involves making distinctions, but deconstructive thinking always turns on itself, using further distinctions to show how any given distinction is misleading. But using this sort of language leads to paradoxical claims as, for example, when you say, as you just did, that beliefs contain a faith that they can’t contain. Paradox is fine as long as we have some way of understanding that it’s not an outright contradiction. So why isn’t it a contradiction to say that there’s a faith that beliefs both contain and can’t contain?

March 6, 2014
How Mark Driscoll Gamed the Publishing Game
Next Post 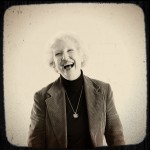