Adam and Christ – The Parallels

The New Testament calls Jesus “the last Adam.” The Apostle Paul repeatedly sets up the parallels between the two, as covenantal heads of the human race. Adam failed to obey God, and brought death on all his children (us) in his role as representative or High Priest. He transmitted this consequence through natural descent. Jesus obeyed God, and by suffering the consequences of Adam’s sin on behalf of His people and defeating death, brought them life. Paul explicitly teaches as much. 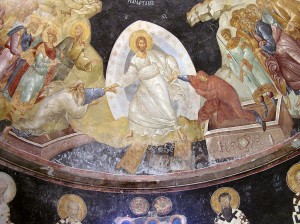 But one of the glorious thing about Scripture is what it doesn’t say, at least in so many words. Reading between the lines, the Bible is a veritable gold mine of typology, symbolism, and parallels that the New Testament only begins to scratch. It’s as if the Spirit spelled out what we needed to know, but left the rest to uncover through careful study. I regard this as one of the chief marks of Scripture’s authenticity and divine origin: no matter how deeply you dig, there’s always more material to uncover.

The striking parallels between Adam and Christ–specifically those not spelled out in the text–are one of the easiest examples to adduce. Here are a few implicit ways the two heads of humanity correspond:

The first Adam was naked and received clothes. (Genesis 3:21)
The Last Adam had clothes but was stripped naked. (Matthew 27:28)

The first Adam blamed his bride. (Genesis 3:12)
The Last Adam took the blame for His bride. (Ephesians 5:25)

The Last Adam gained a wife when man opened God’s side (John 19:34)

The first Adam listened when the Serpent said “take and eat.” (Genesis 3:5)

There are many, many more. But again, these are just a few impromptu examples. The point is it’s too poetic for an accident, too subtle for propaganda, and too improbable for anyone but God to orchestrate. And all you have to do is read with both eyes open.

Image: Jesus pulls Adam and Eve out of their graves at resurrection. Parecclesion, Church of the Holy Saviour in Chora, Istanbul. Wikimedia Commons 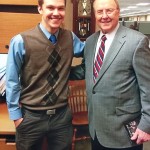 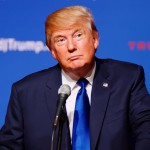 July 25, 2016 Trump, Dingoes, and the Pro-Life Judges Argument
Recent Comments
0 | Leave a Comment
Browse Our Archives
get the latest updates from
Troubler of Israel
and the Patheos
Evangelical
Channel
POPULAR AT PATHEOS Evangelical
1

A Letter to Christians Who Can't...
Ponder Anew
Related posts from Troubler of Israel