Should Christians Eat the Passover Seder? A Response to Christianity Today 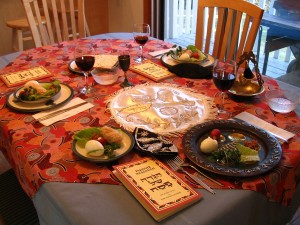 Their basic claim is that the Seder meal as celebrated at Passover by Jews the world over originated in the centuries following the destruction of Jerusalem and the birth of Christianity, and was never celebrated by Jesus or His disciples. Therefore, the increasing popularity of Jewish-inspired Passover celebrations among American evangelicals, especially Christians identifying as Messianic Jews or members of the Hebrew Roots movement, are unhistorical at best, and patronizing cultural appropriation at worst.

For their fuller argument, I’ll let you read the article, yourself. As someone who grew up interacting with evangelicals dabbling in Judaism, as well as Dispensational theology which often seemed to teach a distinct plan of salvation for the Jewish people, I’ve got a few immediate thoughts on this piece.

First of all, I found it contradictory. Poupko and Sandmel start out insisting that the Passover Seder connects Jews across time and space stretching back to Egypt:

“For Jews, however, the most important Passover meal is the very first, described in Exodus 12. It is the meal by which Israel celebrates its liberation from the pagan culture of Egypt/Mitzrayim by serving the One God and bringing an offering to the One God. That first Passover meal is eaten home-by-home, family-by-family. The guest list consists of all the members of the family, men and women, old and young, wise and foolish, learned and ignorant, boys and girls. In other words, present at that first Passover offering was the whole Jewish family in all of its delight and complexity. When Jews today celebrate the Passover, they are reenacting that moment and connecting with all Jews across time and space who have been celebrating the Passover Seder for millennia.”

Bizarrely, the rest of the piece is an argument that Christians mustn’t celebrate the Seder meal, because Jesus didn’t celebrate it, and because it belongs to Jews, alone. Which prompts the obvious question: If the meal eaten in Exodus 12 is the “most important Passover meal,” which Jews commemorate to this day, then didn’t Jesus celebrate this meal, too? Which is it, Rabbis?

Second, it’s true that the Passover Seder in its present form is a post-Christian development of Talmudic Judaism. Jesus did not eat precisely the same meal, nor did any Jew while the second Temple was still standing. But this does not mean that there’s no continuity between what happens now and what happened in Egypt over three-thousand years ago (or what happened in Jerusalem two-thousand years ago, for that matter).

Poupko and Sandmel themselves admit that Exodus, chapter twelve contains the instructions for a rudimentary Seder meal. It lacked certain aspects of the Talmudic meal, but it is obviously the same ritual in an early form. The words recited are the same, as are many of the elements. To claim Christians have no right to commemorate the liberation of God’s people from Egypt–something we also believe in and consider a crucial chapter in our redemptive history–seems rather pretentious. The Pentateuch is in our Scriptures, too, and the meal is ours as well, historically. A Jewish Rabbi named Jesus gave it to us. To claim the institutions of the Exodus for Jews alone makes about as much sense as claiming Abraham for Jews alone.

However (and this is a big “however”), I would ultimately not participate in any kind of religious or liturgical observance of the Passover Seder (as opposed to artistic or pedagogic observances, which I see no problem with.) Grasping the true relation between Judaism and Christianity is important. But it’s even more important, if you’re a Christian, to get your own religion right. And contra Messianic Jews and Hebrew Roots adherents, Christian theology has historically held that Old Testament rites, including the Passover meal, have been replaced by New Testament rites. The two main sacraments of the Hebrew religion (Passover and circumcision) have given way to the two main sacraments of Christ (baptism and the Lord’s Supper), which the New Testament explicitly links to the Jewish rites (1 Corinthians 5:6-8, Colossians 2:11-12).

In other words, Christians should not celebrate any form of Passover Seder in our worship because Christ replaced the Passover meal with His own body and blood, and has not authorized us to revert to the old (which the book of Hebrews, appropriately, calls “types and shadows of the good things to come”). Eating a Passover Seder in a Christian church is the equivalent of returning to circumcision or sacrificing bulls and goats. It is a reversion from the fulfilled reality, to the unfulfilled shadow. And though Christians have every right to consider the Exodus and all it represents our own, we believe we have what the “night different from all other nights” ultimately prefigured. Christ, as Paul wrote, is “our Passover Lamb.” On the cross He gave us the unleavened bread of His body, the wine of His blood, and the sweat of His brow. Why would we return to sheep and bitter herbs? 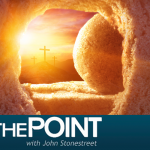 April 5, 2017
AP Forgot the Resurrection - The Point
Next Post 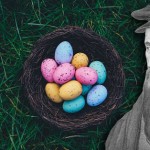 April 13, 2017 On Holidays and Calvinist Curmudgeons
Recent Comments
0 | Leave a Comment
"Just MAGAlies, leading to 🤢☠️💀☠️ for those that believe this 💩"
Alan Drake Christians’ Complicated Relationship with Experts
"[There was no "lack of God's Word" during the 5-14th centuries. In fact, the Roman ..."
theresa perry Christians’ Complicated Relationship with Experts
""...They want to know where my God gets off..."No, they don't. I realize you're trying ..."
Maine_Skeptic God’s “Yes” and Long Fights
"I would suggest that what's sorely missing on the subject of 'sin' is any precise ..."
klatu | G. Shane Morris
Browse Our Archives
get the latest updates from
Troubler of Israel
and the Patheos
Evangelical
Channel
POPULAR AT PATHEOS Evangelical
1

Announcing...Living the King Jesus Gospel (A...
Crux Sola: Formed by Scripture to Live like Christ
Related posts from Troubler of Israel