Post-Pascha Reminder: Easter Is Not a Pagan Holiday

It’s Eastertide (it’s not just one day!) and if you know an evangelical Baby Boomer with an Internet connection and a tendentious side, chances are you put up with annual claims that this most blessed Christian feast has a pagan origin. More than likely, the attacks have sounded something like the text of this eternally-popular-but-disastrously-inaccurate meme. 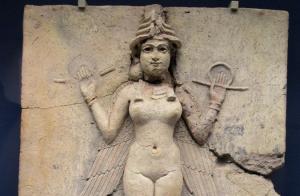 I suspect this gem is the work of poorly-researched atheists, who also take regular swipes at Christmas (and have been ably answered). The Facebook page attributed on the meme doesn’t appear to exist any longer, so I can’t verify this suspicion. Here is the text of the meme, which features a picture of the Babylonian-Sumerian goddess, Ishtar:

“This is Ishtar: pronounced: Easter. Easter was originally the celebration of Ishtar, the Assyrian and Babylonian goddess of fertility and sex. Her symbols (like the egg and the bunny) were and still are fertility and sex symbols (or did you actually think eggs and bunnies had anything to do with the resurrection?). After Constantine decided to Christianize the Empire, Easter was changed to represent Jesus. But at its roots, is all about celebration [sic] fertility and sex.”

Jonathan Graham, a Facebook friend of mine, who has studied Classical Antiquity and is pursuing a career in adoption law, was also bothered by this viral nonsense. So he decided to post a point-by-point rebuttal. I’ll simply quote him (with his permission), here:

“This is Ishtar: pronounced: Easter

Oof, to lead with that punctuation should be criminal. The fact that anyone took this meme seriously and shared it is indicative of much of what is wrong with social media. If you don’t read anything else, please, read this: you should be able to tell when a source is trustworthy and when it isn’t, and something that looks this bad deserves a little fact-checking.

Okay, down to business. That is Ishtar, alright, which is pronounced exactly as it looks. She was the Babylonian adaptation of Inanna, the Sumerian goddess, and had some influence over the development of the cult of Aphrodite in Greece. “Ishtar” has no etymological relationship to “Easter,” which is a word of Germanic origin (more on this later).

Easter was originally the celebration of Ishtar, the Assyrian and Babylonian goddess of fertility and sex.

No, it wasn’t. She had a lot of festivals; none of them were called Easter. That would be very difficult, considering the word Easter comes from German tribes much later (again, more in a moment). It is correct that she was the goddess of fertility and sex. One of the festivals we have on record regarding her took place in Tammuz, which is about June-July, so not even close to the Easter season.

…(or did you actually think eggs and bunnies had anything to do with the resurrection?).

Ignoring the horrible punctuation, this is the kind of point (the question is rhetorical, after all) that isn’t even wrong. Of course eggs and bunnies don’t have anything to do directly with Christ’s resurrection. The New Testament doesn’t mention either one. Like any iconography, the development is difficult to trace and has various potential sources (I’ll mention a few), but Ishtar isn’t one of them because she has no rabbits or eggs associated with her in her mythology or iconography.

For rabbits, some ancient authors (e.g. Pliny the Elder, in his Naturalis Historia) believed that rabbits were able to reproduce without a mate, i.e. without losing its virginity. Some Christians associated the rabbit, then, with the Virgin Mary, and thus the rabbit entered into Easter iconography. Additionally, the Easter Bunny seems to come from Germany (notice how it’s just Germanic languages talking about “Easter?”), as a rabbit who would dole out gifts of eggs based on how children had behaved during Lent. It reminds me a bit of Santa Claus.

But why eggs, I hear you asking. Some groups, like the Eastern Orthodox, prohibit the consumption of eggs during Holy Week (the week before Easter). In order to preserve the eggs so they would not go to waste, the parents would boil the eggs and give them as gifts on Easter (or, in the East, Pascha) day, when they could be eaten again. Coloring eggs to make them more festive caught on. So there are some ideas about where these traditions came from for your amusement, but remember, the bigger point is that they did not come from Ishtar, because eggs and bunnies were not included in her iconography.

After Constantine decided to Christianize the Empire…

Scholars contest whether Constantine Christianized the Empire, or just hitched his cart to the already-spreading Christian horse. Both are possibilities; dismissing Christianity on the grounds that one or the other is true simply commits the genetic fallacy.

…Easter was changed to represent Jesus.

There was no festival called Easter in Rome or elsewhere in the Mediterranean world. That’s because, again, Easter comes from Germanic tribes. In Rome and Greece, Constantine would have celebrated “Pascha,” which, as you can see, bears even less resemblance to “Ishtar” than “Easter” does. Pascha is the Greek word for what English languages call Easter.

So, at last, let’s talk about where the word “Easter” comes from. The Venerable Bede, in “De Temporum Ratione,” tells us that the Britons, like many people, named their months after their gods. So just like the Romans had January, after Janus, the Britons had Eosturmonath, after Eostur/Eostre, a Germanic goddess.

“But wait,” I hear the meme’s author say, “doesn’t that prove that Easter *IS* in fact a pagan tradition which the Christians took over?” No. Of course it doesn’t. Christians were celebrating what we call Easter as the Paschal season long before they ran into Britons who worshiped Eostre. When they did get up into Britain, they kept celebrating the same rites, but changed the name. Since the Britons set their calendar by the moon (just like the Jewish calendar, by which the date of Pascha is calculated), the Paschal celebration always fell within the Easturmonath, so it made sense to call it “Easter.” But to say that this was Christianity picking up on “pagan celebrations” is like saying that Independence Day in America has something to do with Julius Caesar because we sometimes call it the Fourth of July (a month named, of course, for that man).

But at its roots, is all about celebration fertility and sex.

Seriously, whoever shares something with grammar that bad in it should be sentenced to remedial school.

Perhaps strange to our modern sensibilities, Ishtar’s celebrations are not all actually about fertility and sex, although some were. But whatever the case may be, it doesn’t change the fact that “Ishtar” has nothing to do with “Easter.”

Happy Easter, y’all. Christ is risen. May the light of the Risen Christ shine upon you. God bless you, and grant you His peace during this Easter season.”

A thorough analysis of a less-than-thorough meme, if ever I saw one!

As the kids on the Internet these days say, “weak sauce!”

But let’s take this one step further. As Jonathan suggested to me later over private message, there’s a deeper point to make, here. Let’s assume the word “Easter” is derived from the name of the goddess Ishtar, and that all of the more frivolous symbols associated with the holiday (eggs, bunnies, etc.) really were symbols of an ancient fertility cult that were later appropriated by Christians.

I may be stepping on a few Regulative toes here, but I’m going to say it, anyway: Christians shouldn’t be  afraid to appropriate pagan imagery or customs that lend themselves to the presentation of the Gospel. Provided they are not a cover for syncretism (that is, the intentional and conscious worship of a pagan deity under the guise of Christianity), and as long as there is nothing intrinsically sinful about the tradition or imagery, itself, Christians have every right to yoink beautiful or even kitschy customs from the unbelieving world.

All is ours, in Christ. Satan, the strongman, is bound, and we are plundering his house (Mark 3:22-30). That means we get his days (all 365.25 of them), his food (mmm, bacon) his crosses, his sacred groves, his yule logs, his fortresses, his empires, his languages, his three-leaf clovers, and yes, even his rabbits and eggs (if he’s ever really wanted them). Christianity is God’s reclamation of all reality in Christ. And as co-heirs with Christ, everything is ours.

This Christian tendency to fear days and words and neutral symbols which serve the Gospel better than they serve their old pagan masters has as little support as the atheist tendency to cook up memes attacking Christianity with bogus history. We are a conquering army, guaranteed of victory, not a defeated force holed up behind our walls, waiting for rescue or rapture. The gates of Hell are defensive, not offensive structures, and our Captain promised that the gates of Hell will not be able to withstand His Church.

Happy Easter (season)! Go forth and conquer, knowing He who conquered Satan, death, and all the powers of Hell goes before you. And don’t fear his fiery memes. 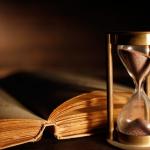 April 9, 2018 Biblical Illiteracy Isn’t Funny, It’s Scary
Recent Comments
0 | Leave a Comment
"I can't come to terms that you believe The Roman Catholic Church preaches and teaches ..."
Charles B55 Christians’ Complicated Relationship with Experts
"Haha enjoy the Prime series then. Eat your manly heart out."
Leila Marshy ‘The Wheel of Time’ As a ..."
"That was my experience, too. (I was 8.) It was less scary to ask the ..."
Michael Bates The Real Reason Evangelicals Don’t Baptize ..."
"Falls Creek usually produced lots of teens rededicating their lives, although there were a few ..."
Michael Bates The Real Reason Evangelicals Don’t Baptize ..."
Browse Our Archives
Related posts from Troubler of Israel