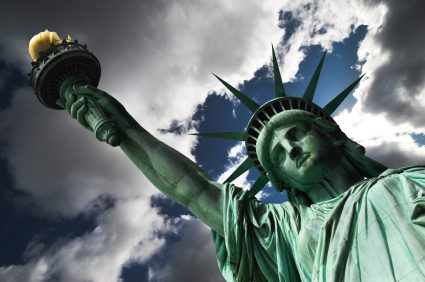 According to a recent Barna study, a strong percentage of Evangelical Christians believe their religious freedom is under threat. But is our religious freedom under threat, or simply our dominance? In view of the study, David Kinnaman, Barna’s president argues, “Evangelicals have to be careful of embracing a double standard: to call for religious freedoms, but then desire the dominant religious influence to be Judeo-Christian. They cannot have it both ways. This does not mean putting Judeo-Christian values aside, but it will require a renegotiation of those values in the public square, as America increasingly becomes a multi-faith nation.”

While some may argue in response that it is our Christian values that make it possible for there to be religious freedom, history in this country and elsewhere would show that this has not always been the case, when Christianity or Christendom has prevailed. Our country’s democratic values were certainly shaped in view of such problems as religious oppression in Europe, but such oppression occurred at the hands of what many hailed as a Christian empire or Christian nation states. It is a mixed bag: if it weren’t for the influence of enlightenment philosophers and minority Christian groups such as the Puritans fleeing from societies where Christendom had held sway for a very long time, we may never have seen the development of the American democratic experiment. That experiment is still under way, for those fleeing persecution and establishing our democracy did not think long and hard enough about how to preserve the freedoms of others, including the indigenous people on American shores and Africans taken from their continent to these shores. To this day, there are inequitable racialized structures still in place. We have a long way to go in terms of preserving and promoting liberty.

Regardless of what we make of history and the role of Christian values in the formation of the United States, here are some practical recommendations for how we Evangelicals should live in the present context:

First, we need to guard against double-talk: wanting to preserve Christian dominance and calling for religious freedom for all. If we Evangelical Christians want religious freedom, we will need to champion the religious freedom of others, even if we disagree with them on their views, and even if it means that they will critique us with that freedom.

Second, we cannot assume that everyone will agree with us. We have to argue our case in a manner that makes sense to everyone, and to do so in a gracious, irenic manner. With this in mind, we will have to learn not to use Christian jargon, but speak in a manner that everyone can understand. Nor can we discount others’ views because they are Mormons or Muslims, for example. We need to evaluate their positions on the merits of their arguments, and ask that they do the same with ours.

Third, in those cases, however many they may be, where our Christian convictions are critiqued simply because they are Christian, we will need to learn how to be long-suffering, in part because it is a Christian value, and in part because we belong to a movement that has unfortunately caused many to suffer because of our faith. The same scenario would likely be the case if another religion had dominated the American scene for so long. Whenever an individual or institution has power, it tends to do harm, not simply a lot of good. If we learn to listen well, we will eventually earn the right to speak as part of the conversation; the same principle holds true when engaging in conversations on race, as our society becomes increasingly ethnically diverse. White Evangelicals such as myself need to learn how to listen more and change our posture so that we are part of a conversation rather than dictating the terms of the conversation. As participants in the conversation, we will find that we have so much to learn from others of diverse perspectives, even while adding value to the discourse.

Fourth, we need to learn to be collaborative. Kinnaman used the word “renegotiation”: Evangelical Christians need to renegotiate our faith in our increasingly multi-faith society. Some will read “renegotiation” to mean compromise, as in sacrificing core convictions. “Renegotiation” does not necessarily mean compromise. It can suggest collaboration, which is how I understand Kinnaman to use the term. Compromise as defined here is different from collaboration. Compromise entails surrendering core convictions for the sake of being at the table with others. Collaboration entails operating in a way that the aims of the various parties are integrated in such a manner that the resulting state of affairs is more beneficial. Some may point to the recent story, “Dan and Me: My Coming Out as a Friend of Dan Cathy and Chick-fil-A,” as an example of such collaboration involving a nationally recognized LGBT leader and Chick-fil-A’s president and COO, Dan Cathy, a conservative Christian. Closer to home for me was the invitation to participate in the twenty-fifth anniversary celebration of the building of a mosque in Portland. I did not go there to preach the Gospel, but to demonstrate the Gospel as a neighbor and friend of these Muslims who have been involved in significant works of service in the Greater Portland area and beyond. If I am not willing to support Muslims’ freedoms in this country, such as space for their mosque, why should I expect that they would support space for churches in our increasingly multi-faith society? We should do for others what we would hope they would do for us. I look forward to partnering with my Muslim friends in various ways, including care for Muslim refugees and immigrants in the pursuit of peace (the subject of an interview I did with a Muslim leader yesterday that will air later) that benefits not simply Evangelical Christians, but also Muslims, and people of all other backgrounds. The resulting state of affairs is more inclusive discourse and a more inclusive peace benefiting all.

The loss of religious dominance does not have to spell the end of religious freedom for Evangelical Christians, but an opportunity for collaboration that benefits the freedoms of all.

January 31, 2013
Are Christian and Muslim Convictions Compatible with American Values?
Next Post

February 4, 2013 Jesus, Darwin and Donald Trump
Recent Comments
0 | Leave a Comment
"Yes, we all ARE on Life Support. This planet has a system that recycles Oxygen, ..."
Kyllein MacKellerann Don’t Take Anything for Granted. We’re ..."
"LORD Jesus, heal Christopher. Amen."
Herrnhut The Resurrection Is More Than a ..."
"00"
Graeme Cooksley Jesus’ Victory Doesn’t End on Easter. ..."
"This article reminds me with my teacher who tells us (his students) to not smoke ..."
Jason Imanuelle Are You Smoking What You’re Selling?
Browse Our Archives
Related posts from Uncommon God, Common Good