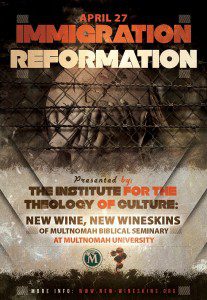 One way or another, if one of these two positions wins out among Republicans, Republicans may end up eating crow during the next Presidential election. Some Republicans fear that the Democrats will be viewed increasingly as the representatives of equality and justice and the Republicans the advocates of a two class system. The Republicans have a long way to go to be viewed as a party that welcomes minority groups.

Last year, after the Presidential election, I wrote a post that included a discussion about what Republicans could do to become more open toward minority groups.  My recommendations still stand and bear on the present discussion. Among other things, I hope that Republicans make the shift and become more welcoming of minorities, including those who are undocumented immigrants. Such initiatives must not be based on political expediency and survival, but based on the firm conviction that justice and American values require such moves. If the only reason for avoiding Jim Crow is based on opinion poll appearances, then the rationale against Jim Crow is only skin deep. Minorities sympathetic to the concerns of undocumented people of minority status will likely be able to see right through such shallow moves and realize Republican views will change as soon as expedience goes in a different direction. Such minorities (who are becoming a significant voting bloc) will be sure not to vote for these political opportunists whose resulting diet of crow will be most fitting.