Papal Posture, Power Religion and the Poverty of Love 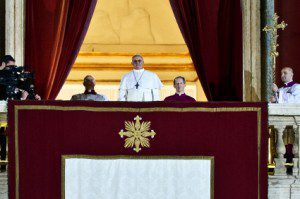 I was blessed to read that the new pope, Pope Francis, asked the people to pray for him before he blessed them. He also refused to be elevated above the cardinals on a platform. Not only that, when he was archbishop of Buenos Aires, he determined not to live in the archbishop’s palace, but in an apartment, and passed on taking a chauffeured limousine to work in favor of the bus. Known for his simplicity and for being a voice for the poor, it is quite fitting that Jorge Bergoglio chose as his papal name, Francis (in view of St. Francis of Assisi)—the first time this name has been used for a pope.

The new pope’s symbolic actions and characteristic traits are no doubt welcome signs to many. Among other things, the name Francis suggests that he sees his role as one of rebuilding the church, which includes embracing the traits already noted as modeled by the pope. For example, the heart-felt posture of humility noted above, which is essential to rebuilding the church, entails regard for dialogue. Although the new pope is known for being a resolute conservative on social issues, U.N. Secretary-General Ban Ki-moon said of Pope Francis that he shares common aims with the U.N. over advocacy for social justice and peace and that they “share the conviction that we can only resolve the interconnected challenges of today’s world through dialogue.” Certainly, concern for meaningful and sustained dialogue is key to addressing the various interwoven challenges the world faces today. Among other things, dialogue entails going beyond confronting ideological platform positions with ideological platform positions.

While I appreciate fellow Evangelical Gary Bauer’s affirmation that Evangelicals should care about the new pope, his reasoning for why Evangelicals should care about the new pope is based primarily if not exclusively on his conviction that “Catholics are our best allies in important cultural and political battles,” as his USA Today article’s tagline conveys. Indeed, there are many areas of agreement between Evangelicals and the Catholic leadership on social issues, for which I am very grateful. Moreover, Evangelicals have a long way to go in terms of developing a consistent and comprehensive theology of life and could learn a great deal from Catholicism, whose teachings on social ethics are exceedingly robust. Still, we may also be able to learn a thing or two about how to dialogue from the new pope, if as the U.N. Secretary says, he is committed to approaching the world’s many interconnected challenges in this way.

One area where dialogue is needed is with the Muslim world. With this point in mind, I wasn’t sure what to make of Bauer’s claim that “Catholics and evangelicals (and to a lesser extent orthodox Jews and Mormons) have formed a formidable partnership in recent decades against the threats of secularism, relativism and Islamism.” How is such a statement not read as fighting words to Muslims? Evangelicals have a long way to go in terms of building trust with Muslims in pursuit of resolving longstanding conflicts involving religion in our world today.

I would hope the main reason why Evangelicals would affirm the new pope is not his social conservative platform, but his posture and lifestyle of humility, simplicity, and care for the poor, along with what the U.N. Secretary-General claims is his commitment to dialogue. If his papal name is any indication, he wants to listen first and understand before being understood. The prayer attributed to St. Francis titled the Peace Prayer includes the lines:

O Divine Master,
Grant that I may not so much seek
To be consoled, as to console;
To be understood, as to understand;
To be loved as to love.

This past week, I was part of a dialogue involving Evangelicals and Buddhists on the subject of abortion and related social issues. What was striking was that for our various metaphysical and lifestyle differences, we chose to listen to one another wrestle through the issues based on our personal narratives and histories, not merely ideology. As a result of taking time to listen and share and complicating the issues, not as ideological opponents but as people with complex lives, we were in a better position to work through difficult topics and come to a greater sense of mutual understanding of one another’s positions and what needs to occur if we are to make headway on social ethics rather than label one another in the extreme.

The preceding statements should not be taken to mean that theology and ethical foundations don’t matter; they matter greatly. But the only way we are going to be able to make progress on divisive social issues is when we get to know our supposed ideological opponents as people, for whom the issues before us matter to them at a deeply personal, existential level, just as much as they do to us. By humanizing issues and complexifying ourselves, we are also able to simplify life to an extent: the solution to many difficulties involves cultivating greater understanding of people’s lives and positions rather than painting them in ideological terms of opposition, whether they are Muslims, Buddhists, secularists, Catholics, or Evangelicals.

Power religion paints people and positions in ideological terms. Why I welcome the new Pope most is because of his posture of humility, simplicity and the selection of his name Francis, which conveys the effort to understand and love before seeking to be understood and to be loved. In a world poverty-stricken for understanding and love, this pope may very well be a welcome sign.