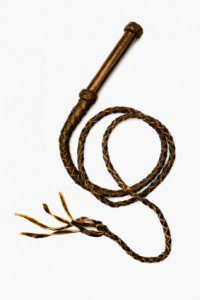 Have you ever felt like a whipping boy? Have you ever wanted to get revenge for being treated as a scapegoat and exchange places with the whipping man?

My wife and I went to see the play The Whipping Man last Saturday evening. The Whipping Man is a powerful, tragic story of personal faith and shared history involving a severely wounded Jewish Confederate soldier and two of his family’s former slaves. The Jewish Confederate soldier returns home after the close of the Civil War and finds that his family’s mansion is nearly abandoned, ransacked, and burned. The two former slaves who live there tend to his wounds and invite him to share in the Passover celebration with them, as they themselves were raised in the Jewish faith by his family. Together they reflect upon the tragedy of war, the horrors of slavery, the Exodus, and their uncertain future in a new era.

The two former slaves reveal their emotional and physical scars from their encounters with the whip at the whim and will of their former masters. Yet they still hold out hope in the God of Israel, of whom they had learned from their masters. How striking, in part, because the young former master—Caleb—who has returned home, has a hard time believing in God anymore because of the whipping he and his troops took during the war. The three men represent two peoples who have experienced in their history the tragedy of slavery joined together by faith and doubt, suffering and hope for a better tomorrow. One finds out in the end that they are joined together in even more ways—Caleb had impregnated the daughter of one of the former slaves—Simon (as a result, she was sold to someone else by his father) and his father was the father of the other former slave—John. If we go back far enough, we might find the rest of us are distant relations. Even so, one of the things we all have in common is that we all feel like the whipping boy from time to time and we are all tempted to take the whip and get revenge, just as John did and killed the whipping man.

One of the things that stands out to me today—Good Friday—as I look back upon that play and the celebration of the Passover is how Jesus identified with these Jews of different hues; he shared their history and their fate. He also offers them and all of us hope. How readily we long for revenge. How desirous we often are for grabbing the pearl-handled whip as in the story to beat the whipping man to death, like John did. I get the passion for revenge. What I often fail to comprehend is how Jesus did not respond in kind. Even on the cross he pleads with his Father to forgive his persecutors—these murderers—for they cannot possibly comprehend the horrific evil they are doing (Luke 23:34).

All too often we are enslaved to our fears and hatred of others. Forgiveness is the last thing that crosses our minds. But we will never experience true freedom if we constantly live to return the favor. This Friday is very good in that through remembrance of Jesus’ passion and death we are called to lay aside our past grievances and die to them so that we can live anew Easter morn. This spotless, innocent Passover Lamb—this guileless scapegoat—makes it possible for us to drop our whips and be healed by his wounds and scars (Isaiah 53:5), for he has absorbed the need for hate and revenge. “It is finished” (John 19:30).

Will we drop the whip and not pick it up again come Monday?

A Letter to Christians Who Can't Take the...
I know you're tired. Run down. Sad. Fed up. Angry, even. I...
view all Evangelical blogs
What Are Your Thoughts?leave a comment
Copyright 2008-2021, Patheos. All rights reserved.