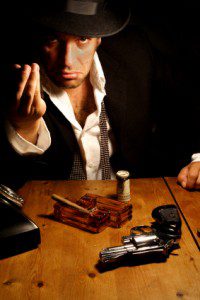 For those who still haven’t watched the movie, you might find here a spoiler or two.

Pulp Fiction is one celebrated, complex, multi-faceted, and troubling gangster movie. Celebrated in that it is considered one of the greatest movies of our time, complex in that the scenes do not go in chronological sequence and the dialogues are often rhetorically robust, multi-faceted in that there are multiple stories within the story, and troubling in that the foul language, drugs, violence, and sexual perversion are dark and heavy. It’s the kind of movie that one may watch again and again in order to get what’s going on and to see movie making at its best.

John Travolta plays one of the gangster hit men in the movie (Vincent Vega). He said of Quentin Tarentino that he would always be Travolta’s guardian angel for raising his career from the dead with his role in the film. Speaking of guardian angels, what strikes me most about Pulp Fiction is Samuel Jackson’s hit man character’s (Jules Winnfield) brush with death and how he is convinced that he and his partner (Travolta) were the beneficiaries of divine intervention. Travolta doesn’t appear convinced. Just like society as a whole, the jury’s out in the film on whether divine intervention is fact or fiction.

I didn’t expect deep theology in this movie, but there it was, even in the midst of Jackson’s creative expansion and distortion of Ezekiel 25:17 (Minutes 13-17) possibly inspired more by the Japanese movie, The Bodyguard (1973), than by Scripture .

Jackson’s hit man plans on leaving his hit man ways in view of God sparing his life, and now he wants to spare a stick up man’s life and walk the earth. Jackson tries real hard to be the shepherd he finds in his rendition of Ezekiel 25:17 rather than the tyranny of death and destruction that devastates the weak (in this case the stick up man who had pointed a gun at him to rob him). The biblical text that he stretches had always served as the starting point for his ending someone’s life. Now that text is being used to save someone’s life from himself.

It’s a powerful series of scenes about providence. Whether or not Tarentino or Jackson believe in providence, those who do believe in it and are conscious of God’s intervention in their lives tend to change their outlook and direction. It’s  scenes and events like these that lift this movie and life itself out of the pages of mere pulp fiction. No doubt, our perceptions of divine intervention impact the way we live life, even distorting or reframing our interpretations of biblical texts, perhaps not so different from what happens with Jackson’s character. At the very least, hopefully, a compelling sense of God’s intervention in our lives will lead us away from making a hit to taking a hit for others.

May 30, 2013 The ABC’s of Predatory Proselytism: Always Be Closing
Recent Comments
0 | Leave a Comment
"Yes, we all ARE on Life Support. This planet has a system that recycles Oxygen, ..."
Kyllein MacKellerann Don’t Take Anything for Granted. We’re ..."
"LORD Jesus, heal Christopher. Amen."
Herrnhut The Resurrection Is More Than a ..."
"00"
Graeme Cooksley Jesus’ Victory Doesn’t End on Easter. ..."
"This article reminds me with my teacher who tells us (his students) to not smoke ..."
Jason Imanuelle Are You Smoking What You’re Selling?
Browse Our Archives
Related posts from Uncommon God, Common Good