Why Did the Buddhists and the Evangelical Christians Cross the Road? To have a potluck.

(Editor’s note: The following is reprinted with permission from Northwest Dharma News where it was originally titled “Evangelicals and Buddhists Share and Probe: A Unique and Fruitful Dialogue in Portland”. It describes a rich and fruitful Buddhist-Christian dialogue that has been unfolding in Portland over many years. The top part of this piece, by Zen Abbot Kyogen Carlson, is followed by a section by me.) 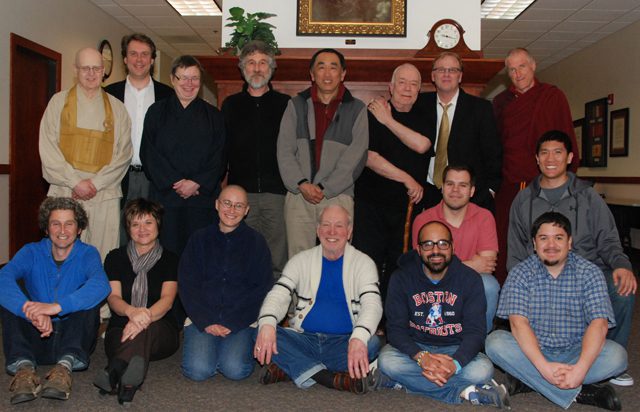 In what might seem an unlikely conversation, conservative Evangelicals and Zen Buddhists in Portland have been meeting for potluck dinners, serious dialogue and the cultivation of friendship since 2005.

People on both sides have found the experience to be eye-opening, refreshing and rewarding. With some humility, not claiming to have all the answers, we have found common ground. We have learned we don’t have to come to complete agreement in order to find areas of agreement.

The most recent series wrapped up April 18 at Portland’s Multnomah University, a Christian college, graduate school and seminary, and plans are already in the works for another series next fall and winter. In 2011 we added vajrayana Buddhists, and this year theravada Buddhists, while the Christians involved have a connection to the university’s Institute for the Theology of Culture. How did this unlikely arrangement come about? 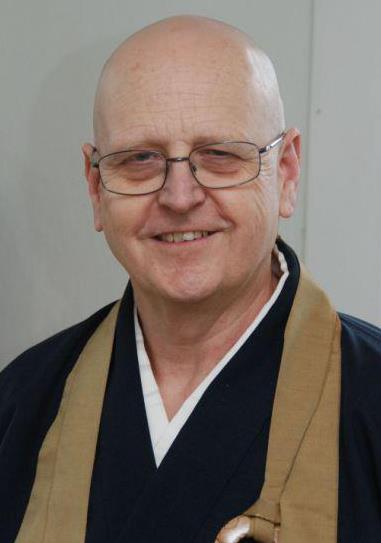 After a phone conversation with a distraught sangha member who was deeply angry, particularly with Christians, I thought of Dr. Paul Metzger, a professor of theology and culture at Multnomah. I had met Paul in a dialogue group that brought religious leaders together with the Portland Police Bureau personnel to discuss social issues, and I had been impressed with his thoughtfulness and understanding of other perspectives.

I got in touch with him and asked if he would be willing to come speak to senior members of our sangha. He said he would.

It is amazing to me now to remember how much fear and anxiety there was on both sides as we first approached each other, with our strong concepts about one another. Paul came to our center with some graduate students to meet with our lay disciple group. Next I went to Multnomah to address students and faculty there.

What I’ve learned from these encounters is that if I am willing to move toward others, yielding a little and admitting I don’t have all the answers, and that sometimes people on my side of the debate are unreasonable, they will relax a bit and move toward me and also yield a bit.

The Christians have proven, for example, quick to admit the harm caused by pressure and harsh rhetoric by some in their camp.

Each year we have tackled the big social issues: abortion, the death penalty, war, gay marriage, and all the related questions. We have also tackled tough personal issues, like “do you believe your gay son is going to hell?”

While to us they can seem rigid in some of their views, to them we can seem rudderless, without a fixed moral compass. What I’ve found impressive is that they find the struggle over these questions to be of paramount significance, just as we do. Fewer abortions would be good, but how do we get there? We tend to agree on the problem of consumerism, but not always on how it manifests itself.

Another time we suggested participants consider what questions they had for the “other side,” such as: “Do you ever find yourself at odds with conservative/liberal ‘orthodoxy’? Is it difficult to speak up when you do?” One meeting ended with each person describing what ‘faith’ meant to them, and how they experienced or felt it. It was fascinating to discover a high degree of commonality in experience.This year, before each meeting, we sent out questions for participants to consider, such as: “Why do so many social liberals oppose the death penalty and support abortion rights, while so many social conservatives do just the opposite? How do you form your views on these questions? How does your religious perspective inform those views? Have your views evolved over time, and if so, how?”

I think many of the evangelicals were surprised by how much liberal Buddhists grapple with ethical issues in a deep and serious way. Many Buddhists, on the other hand, were surprised by the degree to which our Evangelical friends struggle with the many demands their faith places on them, working to understand what God really wants of them.

I have been trying to come up with a metaphor to illustrate our perspectives, and the compass seems to be the best I have found. The Evangelicals’ fixed object is Jesus and their relationship with him; the Bible is their guidebook. They work to align their internal moral compass with both of them. For we Buddhists, the primary point is the internal compass itself, but practice and awareness of mind states are essential for clearing away our obstructions.

One time Paul said to me, “You might not agree, but I think we are morally more consistent than you.” I answered, “Actually, I agree completely, but consistency isn’t necessarily more profound or correct.”

I admire how their consistency holds their feet to the fire, requiring thoughtful Christians to grapple with this consistency. Because we don’t draw lines quite so sharply, thoughtful Buddhists have to grapple with many of the same issues in a different way, to understand how to meet them.

At our last meeting of this cycle a Buddhist, one half of a gay couple, invited a Christian friend to ask the toughest question he could. The Christian was hesitant, and prefaced his question by saying “I hope you know that I love you dearly.” Then he said, “Nevertheless, I believe your homosexual lifestyle does not honor God. How does my saying that affect you?”

The gay man’s partner then described what happened when he heard the question. First he went cold, followed by anger. He watched it arise, then settle. He looked around and saw he was with caring friends and he let it all dissolve. Another Buddhist added, “And that is how we honor God.”

Truly this was an exchange that took place with deep trust on both sides, although it may be hard for many people to understand that. It also demonstrates a difference in the way authority and rules are understood in the two different traditions. 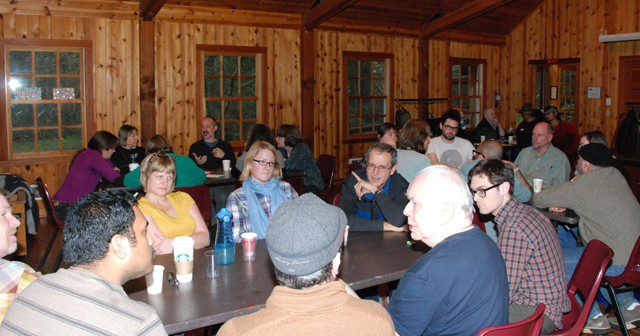 In February, 2012, Christians and Buddhists gathered for a weekend retreat, at Camp Collins, Ore., funded by a grant from the Association of Theological Schools.

Many of the Christians found this exchange to be deeply significant, shining a light on what matters to Buddhists, yet the issue itself remains unresolved. While that is true, as we meet each other and come to understand each other better, we appreciate each other more.

I am very impressed with how the Christians value relationships and neighborliness. It comes from how deeply and sincerely they take cultivating their relationship with Jesus.  Their path is nothing if not personal.

Even as we understand and appreciate each other more, it doesn’t change the perspectives we each hold. These seem to arise from how we are wired, in some profound way. We contend with each other with vigor, but also with loving kindness.  Through this process deep friendships form, and the gulf dividing us disappears.

Kyogen Carlson was educated at the University of California at Berkeley, receiving a bachelor’s degree in sociology in 1971. He was ordained in 1972 by Roshi Jiyu-Kennett, abbess of Shasta Abbey, a Soto Zen monastery in northern California. He received dharma Transmission and full authorization to teach in 1978. Since 1982 he and his wife Gyokuko Carlson have guided Dharma Rain Zen Center in Portland, where they focus on lay practice and building community. He is the author of “Zen in the American Grain” and “Zen Roots.

Beyond Monologue: With Palms and Hearts Joined 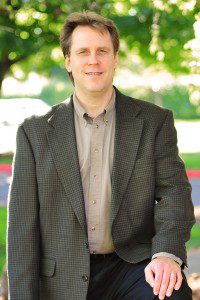 My friend and colleague, Abbot Kyogen Carlson, has often remarked that it is much harder to operate in the middle than at the extremes. Sometimes it is referred to as the radical middle.

Ideology often keeps us talking only among ourselves, at our respective ends of the religious and cultural spectrum.

Kyogen and others in the Buddhist community have demonstrated courage and tenacity in getting to know my Evangelical community. Ever since Kyogen risked and reached out to invite me to speak at Dharma Rain Zen Center, we have worked together “with palms joined,” as he often closes his correspondence.

Hearts and minds have also joined as a result of these conversations and meals. While it has not always been easy, as Kyogen’s article suggests, the risks and challenges have been worth it: I have never had a meaningful relationship that did not demand much of me. I would surmise that the same holds true here for others who have joined palms with Kyogen and me, on this Buddhist-Evangelical dialogical journey.

Last year at an event related to our partnership at Powell’s Books in Portland, Kyogen mentioned that he was struck by how there is an immovable or fixed object for us Evangelicals (Jesus, as disclosed in the Gospel of John, for example) that shapes how we approach dialogue. Kyogen said that for Buddhists the internal compass that involves the process of critical consciousness is the essential matter.

While we also attend to critical questioning, the immovable or fixed object certainly shapes the way in which we Evangelicals approach our engagement with our Buddhist friends and neighbors. What is most striking to me about our Buddhist dialogue partners is how willing they are to press in and move beyond the seemingly immovable stereotypes our respective camps project onto one another, in search of meaningful encounters over potluck meals and personal narratives.

A spirit of inquisitiveness, mixed with transparency and vulnerability, is moving us toward the radical middle and away from the ideological extremes where relationships remain fixed, rigid, and fragile. I must confess that these exchanges are some of the most life-giving encounters I have experienced.

In addition to the qualities of inquisitiveness, transparency and vulnerability that together our groups seek to model, we try and keep the settings intimate. Talking story while sharing food with small diverse groups of people helps to keep conversations from becoming ideologically and politically charged. Of course, politics matter. But politics are intended to serve people with all their positions in search of the common good, rather than reducing people to positions that only serve special interest groups.

We have not changed our theological or metaphysical convictions through these dialogues, though we have deepened our understanding and relationships. We have agreed that the best way to move toward the radical middle is not by leaving our positions behind, or by stopping short of listening unless those on the other side change paths. Rather, we go through our traditions in search of the other, and we find them and ourselves in the process, with palms and hearts joined.