It is important for Christians to know who they are in their faith to enter meaningfully into conversations with those of other religions. It wasn’t an Evangelical Christian from whom I first heard these words, but a professor at a Mainline Protestant liberal seminary, who said his students were not sure how to proceed in conversations with those of other faiths because they were not sure of their own tradition, including such doctrines as Christology. As a result, he said they were at a loss in pursuing such conversations in ways that would prove significant as encounters with those in other religions.

Of course, it is also important to learn well the traditions of those with whom one enters into conversation. The Apostle Paul appears to have been well-versed in Pagan thought, as reflected on Mars Hill (See my article on this subject titled Idol Makers). It wasn’t simply Evangelicals from whom I heard these words, but also from a leading Pagan figure, Jason Pitzl-Waters, who spoke in my world religions class this past Thursday. Jason is the moderator of the blog, The Wild Hunt: A Modern Pagan Perspective (For a discussion of Paganism, see my treatment of the subject and the ensuing comments on the topic at Idol Makers). Jason has spoken two years running in my world religions class (Here is what he wrote last year concerning his rationale for speaking in the class). Jason knows who he is and does not take jabs at us or frame us in view of anti-Christian propaganda. Moreover, Jason does not have hang-ups concerning Christianity; he did not grow up with them either. All this makes it possible for him to engage us well and for us to enter into meaningful conversations with him.

Jason doesn’t expect Christians to believe Pagans are on the right path, but to respect Pagans enough to understand them. He encouraged us Evangelical Christians to be like the Apostle Paul, who thought the Pagans of his day were in error and believed they should convert, but still understood them. Jason encouraged us to embrace a Pauline attitude and said that it is okay to want to try and convert Pagans since that is an Evangelical Christian value. Still, he argued that it is not right to approach Pagans in propaganda-like terms (such as cartoon gospel tract characters that distort and sensationalize real Pagans), but rather in thoughtful terms like Paul did in his nuanced interaction with the Pagans on Mars Hill in Acts 17.

Last year there was a breakthrough in my class when my students realized that Mike Warnke’s Satan Seller does not represent Paganism. They were also taken aback when Jason exhorted us: “If you want to lead me to Christ, become my friends.” It is unlikely that Jason will ever convert; regardless, I would hope Evangelical Christians like myself would want to be his friends, real friends and not just pragmatically so that friendship becomes merely the means to the end of evangelism and conversion. Otherwise, our relational talk is only a propaganda ploy and a front for ulterior motives. As Jason said, “All too often, relationships are abandoned in favor of the sell.”

Jason actually wants to encourage Evangelical Christians to develop a “deeper” missional stance. “Why is that?” I asked him. He responded by saying that he wants to help Christians develop a deeper missional attitude, which is centered in honesty and unfiltered knowledge (not perspectives tainted by inaccuracies and distortions) of the religions with which they interact. He wants us to try and convert the real him rather than a paper cut-out version, which is a caricature. He wants us to see him clearly. If we see him/them that way, then we can have honest discussions and live together in a harmonious manner. If we don’t engage openly with understanding, it leads to even greater distortions. We don’t have to agree about ultimate reality to live harmoniously, but we do need to respect one another for who we are, not discount one another for what we are not. This is a valuable sentiment, and one that I not only share with Jason, but also with my colleague John Morehead at the Evangelical Chapter of the Foundation for Religious Diplomacy. We at the FRD advocate understanding and a discussion of our differences through religious diplomacy rather than a downplaying of differences found frequently in interfaith work.

As Jason reminded us, everyone of us knows how uncomfortable it is when we are misunderstood. Jason does not want to see Christianity defined by misguided extremists. All he asks in return is that we don’t approach Pagans as diabolical cartoon characters. The more thoughtful we are the less likely will it be possible for others to make us the brunt of their own cartoon jokes and the inspiration for their own horror stories. 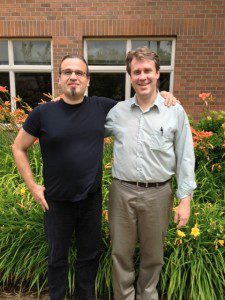 Going further, the more secure in Christ we Christians are the less we need to devalue others from different paths: rather than devaluing them, we should lift up Christ who does not devalue them either but loves them and knows them for who they are, not what we would reduce them to be. By valuing him, we learn to value them in all their radical difference from us; by devaluing them, we end up devaluing him who is radically different from all of us.

June 24, 2013 Why Did the Buddhists and the Evangelical Christians Cross the Road? To have a potluck.
Recent Comments
0 | Leave a Comment
Browse Our Archives
Related posts from Uncommon God, Common Good